Why? Because Reagan is awesome and liked football, plus Democrats don't like him, argues professional pundit 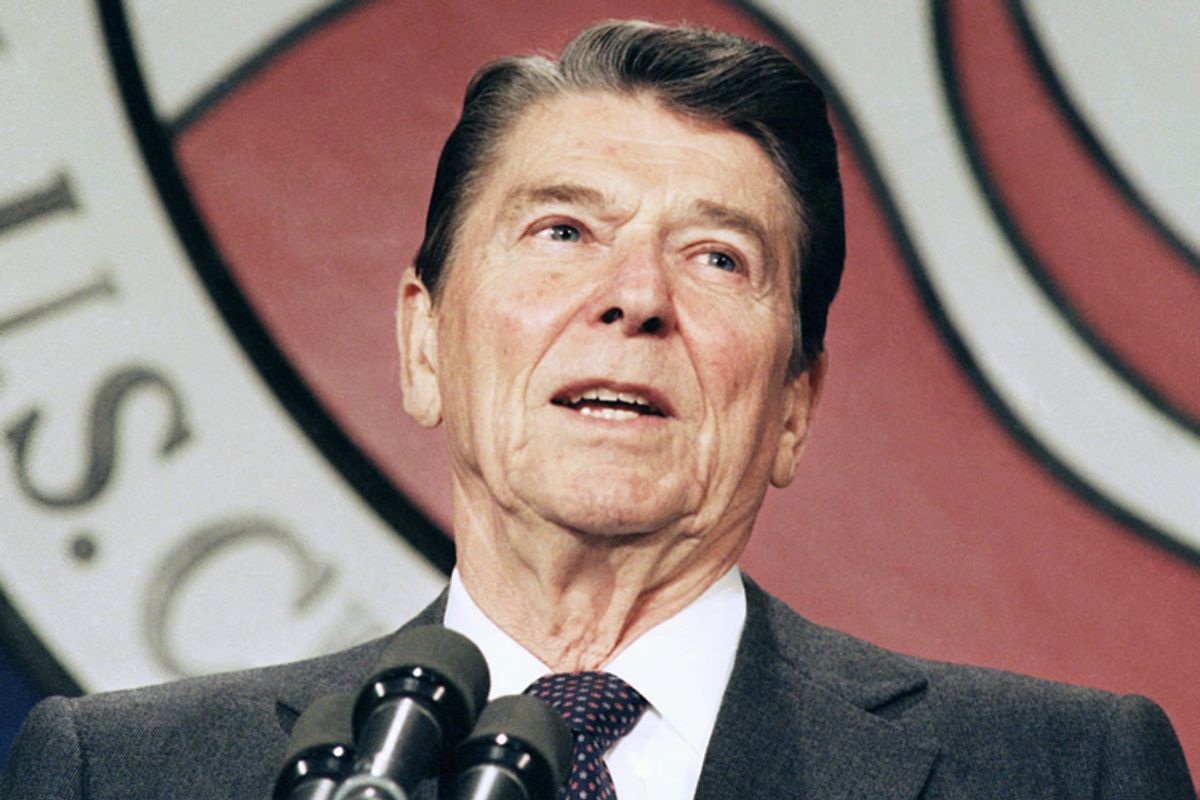 As you've no doubt heard, the name of the NFL's Washington, D.C., franchise is more than a little controversial. It's so controversial, in fact, that the U.S. Patent Office recently decided it would not enforce a trademark on the team name because it was "disparaging to Native Americans." This made conservatives very upset, although it's still unclear exactly why.

Rather than dwell on the negativity, though, at least one conservative pundit wants to put forward a more positive, forward-looking solution. Don't fight a losing battle to preserve the team's offensive name, writes Michael Taube. Just rename the team after Ronald Reagan instead!

"[I]f people keep getting their knickers in a knot about the Redskins' trademarks every 10 or 15 years," Traube writes, "why not change the team’s name to the Reagans?" Yeah, why not?!

As far as Taube sees it, the reasons to name a football team after the conservative movement's patron saint are multiple and obvious. "For one thing," Taube notes, "it would be the ultimate tribute to Ronald Reagan." This is obviously desirable, Taube says, because the 40th president was "a great man, a great patriot and a great president."

"If there was ever a world leader who deserved to have his name associated in a positive fashion with a sports team," Traub continues, "it would be Reagan."

The other obvious reason why there should be professional sports team called the Washington Reagans in the near future? Because Reagan liked football, of course! "When Reagan attended Eureka College in Illinois, he played guard on the varsity football team — and lettered three times," Taube notes. He also reminds readers that Reagan, who was a Hollywood actor before becoming a politician, also played a football player in a movie once.

Last but not least, Taube argues that Reagan would be a good name for Washington's football team because it would make Democratic presidents too scared to bother the franchise.

"Democrats want Washington’s NFL team to change its name," Taube writes. "The Redskins' owner, Mr. [Daniel] Snyder, is the only person who can rightfully do this. Hence, if he chooses to comply and pays homage to a Republican president in the process, [Democrats are] stuck with it. Any further complaints would smack of political partisanship." (And what better way to combat charges of partisanship than naming your team after Ronald Reagan?)

It's not until the end of the column, however, that Taube reveals the actual motivation behind his proposal. It's high-minded, of course: "If I were advising Mr. Snyder, I’d tell him to do it — either temporarily or permanently," Traub concludes. "The political left’s reaction to their game-ending fumble would be priceless."

Here's a picture of the Op-Ed in Wednesday's Washington Times, just in case you mistakenly thought irony was not yet dead: