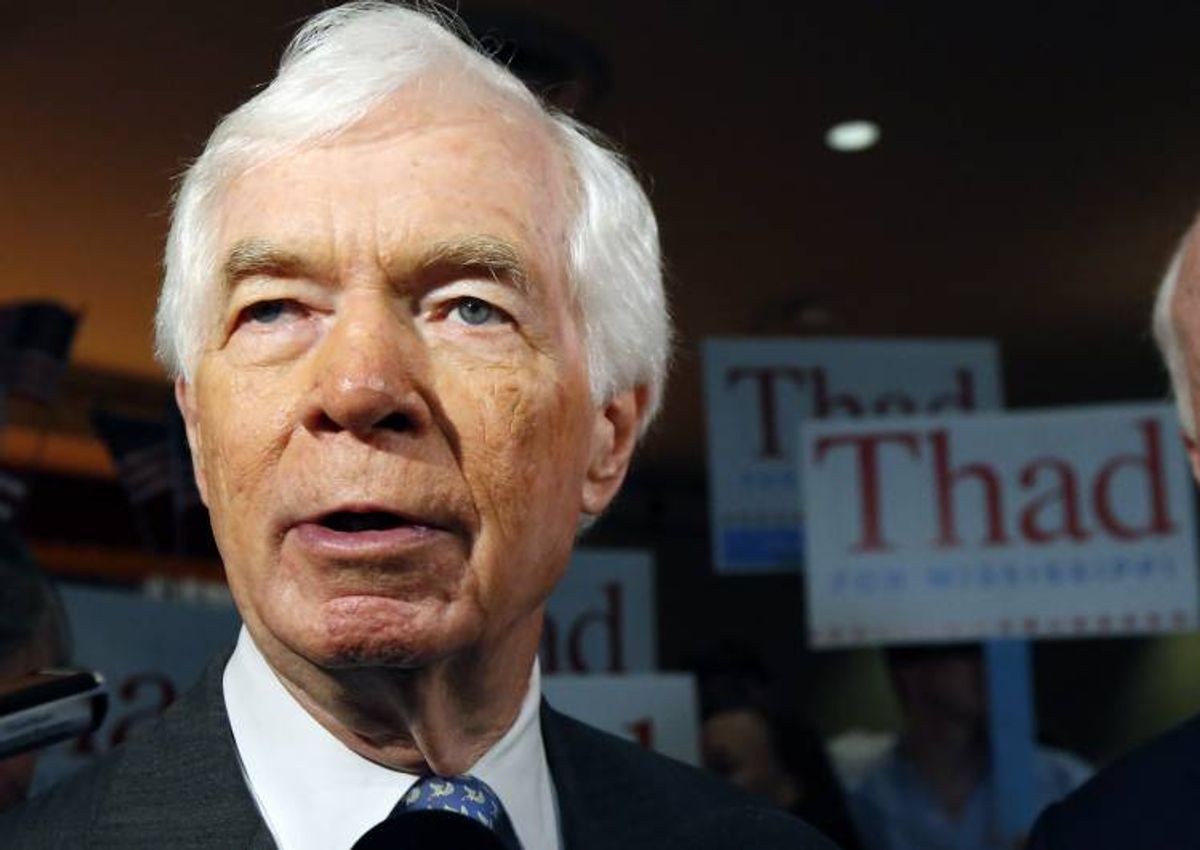 With 99 percent of precincts reporting, Cochran had 51 percent to McDaniel's 49 percent, three weeks after McDaniel had beaten the veteran lawmaker in the initial primary round but had fallen short of the majority needed for nomination. In the three-week dash to the runoff, Cochran and his allies had highlighted his seniority and Washington clout while McDaniel had argued that Cochran was part of a Washington blight of federal overspending.

The victory for a stalwart of the Senate Appropriations Committee was a fresh blow to the tea party movement, which spent millions to cast aside Cochran, a mainstream Republican who won a U.S. House seat in President Richard Nixon's GOP wave of 1972 and has served in the Senate for more than three decades.

In another setback for the tea party, two-term Rep. James Lankford of Oklahoma won the GOP nomination in the race to succeed Sen. Tom Coburn, who is stepping down with two years left in his term. In the solidly Republican state, Lankford is all but assured of becoming the next senator. Part of the House GOP leadership, Lankford defeated T.W. Shannon, a member of the Chickasaw Nation and the state's first black House speaker, backed by former vice presidential candidate Sarah Palin and Texas Sen. Ted Cruz, two stalwarts of the right.

McDaniel declared as he voted Tuesday, "We are here, we're going to fight for our belief system no matter what, and we're going to reclaim Washington, D.C., one race at a time."

But Cochran and his allies, notably former Gov. Haley Barbour, promoted his Washington establishment credentials, focusing on the billions he funneled to his home state, one of the poorest in the nation. In a last-ditch effort, Cochran reached out to traditionally Democratic voters — blacks and union members — who could cast ballots in the runoff. That possible factor in Cochran's victory is sure to be cited by critics in days and weeks to come.

In predominantly black neighborhoods of Hattiesburg's south side, an organized effort for Cochran was evident. Ronnie Wilson, a 50-year-old unemployed Hattiesburg man, said he had been encouraged by his pastor to vote for Cochran.

"They say the other guy is trying to cut food stamps and all that," Wilson said. "I'm trying to look after the majority of people not working."

McDaniel had railed against the federal spending sprees by Cochran but his calls to slash the budget unnerved some voters.

"I believe he is doing a good job," McCain said. "But mostly I'm more scared of the other candidate. He wants to do things like not taking school funding when everyone else is."

In Mississippi, outside groups, from tea party organizations to the U.S. Chamber of Commerce, spent some $12 million on the GOP Senate runoff. Former Green Bay Packers quarterback — and Gulfport, Mississippi, native — Brett Favre called the 76-year-old Cochran a "proven and respected leader" in one Chamber ad.

McDaniel, 41, an attorney and former radio host, had the strong backing of Palin and the tea party movement, which saw his political approach as a change from a Washington status quo of mainstream conservatives willing to compromise.

In November, Cochran will face Democrat Travis Childers, a former congressman, in the heavily Republican state.