Wingnuts and liberals' bizarre role reversal: Why Export-Import Bank politics are so perverse

Nowadays, Democrats are defending Ex-Im, and the right is calling it "corporate welfare." It wasn't always that way 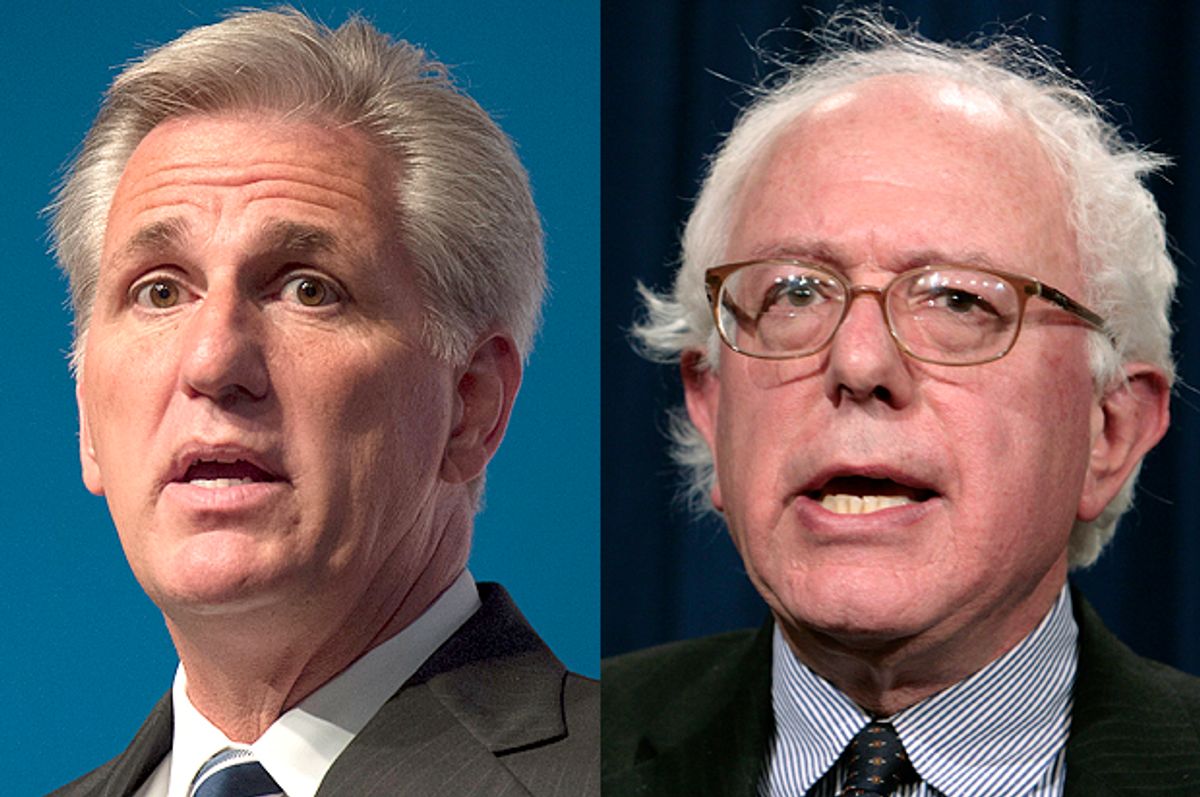 A fascinating game of role reversal is playing out in Congress, where Democrats are teaming up with the Chamber of Commerce, and Republicans are using phrases like “stop corporate welfare.” Many of the same politicians lined up on the other side of the debate just a few years earlier. What has turned Washington into a wonky remake of Freaky Friday? The reauthorization of the Export-Import (Ex-Im) Bank, a government-run enterprise that grants loans and insurance at below-market rates to facilitate large trade deals.

Defenders of Ex-Im argue that the financing it offers, which they say would be difficult to obtain on the private market, helps open new markets to U.S. products and create jobs. That was the main point of White House Press Secretary Josh Earnest yesterday, who cited Ronald Reagan’s past support for the bank. “It helps us meet our export goals,” Earnest said, “at no cost to taxpayers.” Indeed, interest on the loans finances the bank’s activities, which made $1 billion while supporting around $37 billion in export sales last year.

But pre-Internet liberals might want to get out their back issues of the Nation and Mother Jones at this point to jog their memory, for they will see article after article condemning the 80-year-old institution as a slush fund that allows the government to fund a series of nasty activities. Here’s one from 1981 (“The Ex-Im helps sell nuclear reactors to dictatorships like the Philippines”). Here’s another from 1992, about the Reagan administration using Ex-Im to funnel loans to Saddam Hussein’s Iraq during their war with Iran. Even more recently, in 2011, Mother Jones reported on how Ex-Im loan guarantees helped build one of the largest coal plants in the world, in South Africa. (Ex-Im subsequently announced it would stop facilitating coal plant production – but only in December of last year.)

Ex-Im wasn’t just a minor annoyance, but a lefty cause célébre. Here’s Sen. Bernie Sanders, back when he served in the House, eviscerating Ex-Im on the floor in 2002, when it came up for reauthorization then. Sanders asked why American taxpayers would provide “huge subsidies and loans to the largest multinational corporations in the world, who pay their CEOs huge salaries … and companies take this money from the taxpayers and say, thank you very much, and oh by the way, we are laying you off because we are going to China and hiring somebody at 20 cents an hour.”

Sanders crafted bipartisan legislation to reform Ex-Im to better protect manufacturing workers, but the bill’s markup got canceled at the last minute. “My suspicion is that the moneyed interests who like the Export-Import Bank as it is right now sent down the word from the top that that markup never take place,” he told his House colleagues.

Back then, liberals highlighted how Enron, the failed energy giant, benefited from $675 million in Ex-Im loans. In 2002, Sanders also pointed out that Ex-Im gave an $18 million loan to a Chinese steel mill, which was later on accused of dumping steel into U.S. markets and hurting U.S. workers. And it was common just a decade or so ago for lefties to call Ex-Im the “Bank of Boeing,” because close to 60 percent of all Ex-Im loans facilitated their aircraft sales. Sanders in particular pointed out that Ex-Im aid for a Boeing sale to the Chinese military ended up displacing workers, as some manufacturing for the aircraft moved from Wichita to China. “The Export-Import Bank is helping General Electric ship jobs to Mexico … helping AT&T ship jobs to China. And on and on it goes,” Sanders concluded.

And Sanders certainly did not believe that financing for multinational trade deals would dry up without Ex-Im. He questioned the head of the bank in 2004, asking, “General Electric, which itself is one of the largest financial institutions in America, cannot get loans anyplace else but from the taxpayers and the workers of America? Are you going to tell me with a straight face that GE is a struggling small business, a minority business in the barrio of New York, and they just cannot find financing?”

I wanted to give all that back story to inform today’s debate. While libertarian groups like the Cato Institute have been consistent on opposing Ex-Im for picking corporate winners and losers, most of the rest of D.C. has shifted. Establishment conservatives like the incoming majority leader, Kevin McCarthy, once supported Ex-Im. Now he opposes it. While some Republicans still support the bank – 41 House GOP members endorsed it Monday – a large majority of the caucus has turned away, following the lead of Financial Services Committee chair Jeb Hensarling. Republicans barely reauthorized Ex-Im two years ago, amid Tea Party resistance to “crony capitalism.” Then-Majority Leader Eric Cantor was the driving force behind reauthorization then; with him on the way out, the bank is imperiled. Boeing stock crashed after Cantor’s primary loss.

Meanwhile, Democrats have rushed to Ex-Im’s aid. They argue that 60 other countries have Ex-Im-type setups to help their industries, including China, Germany and Japan. They accuse Republicans of carrying water for Delta Airlines, which has criticized Ex-Im for allowing competitors to purchase Boeing aircraft with subsidies they can’t access (although Delta’s chief executive has recently softened his stance on the bank, weakening that argument). They claim failure to reauthorize will eliminate hundreds of thousands of jobs. They proudly tout business group support for Ex-Im. And of course, they’re blasting Republicans for flip-flopping.

But few in Washington have clean hands here. President Obama himself called Ex-Im “little more than a fund for corporate welfare” while on the 2008 campaign trail. When George W. Bush was in the White House, Democrats excoriated Ex-Im as an example of wealthy corporations feeding on government subsidies. The bank hasn’t changed; the perception of it has.

It’s hard to ignore the deep support Ex-Im supplies certain corporations like Boeing. And defenders who say that Ex-Im has changed from the Reagan-Bush years into a model of technocratic competence must reckon with this revelation of kickbacks and pay-to-play gift exchanges, which has led to the suspension of four top officials of the bank in recent months.

You can make a case for Ex-Im supporting U.S. trade deals and staying competitive with other countries, though to do so, you have to forget all your impulses about the importance of unfettered free trade. “This is identical to an argument for protecting an industry,” economist Dean Baker, a stalwart opponent to Ex-Im on the left, told Salon. “It is just one more example of how the rich and powerful have no interest in the free market when circumventing how the market works to their benefit.”

While there are probably votes available in the House to reauthorize Ex-Im, the House leadership is unlikely to oblige before the charter expires in September. Anti-crony capitalist Republicans have made this their top priority, and leaders like Hensarling have turned a deaf ear to businesses in their home states and districts who want the bank renewed. A hearing in Hensarling’s House Financial Services Committee today was stacked with Ex-Im opponents. The bank could really go down.

I know plenty of liberals who wished deeply for decades for such an outcome. One wonders, if the opportunity comes, whether they will support their party, or their conscience.