He was ridiculed for forecasting a 30-point win for Eric Cantor. But John McLaughlin's up to something worse now 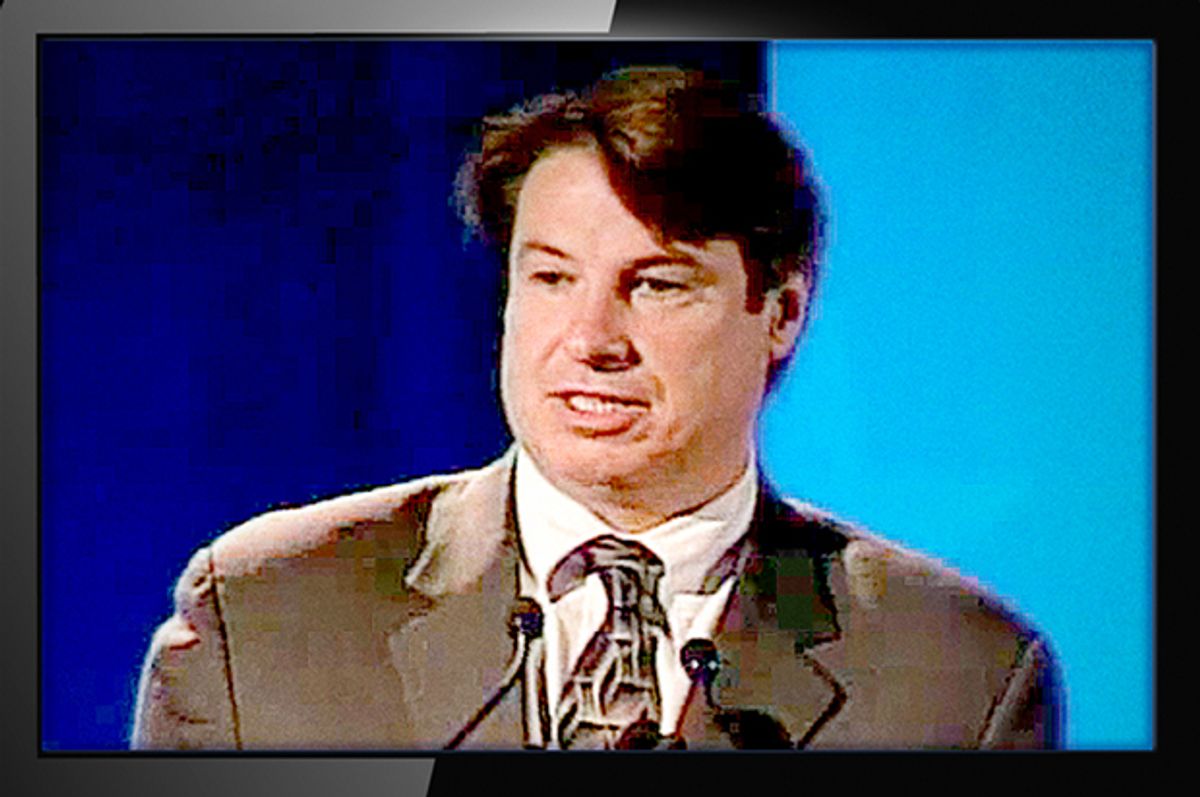 But the widely ridiculed pollster’s activities extend beyond a high-profile primary race in Virginia. McLaughlin, along with his Democratic counterpart Pat Caddell, has spent the past three years participating in a campaign, Secure America Now, connected to two Republican billionaires, seeking to convince Americans that an aggressively militant foreign policy is vital to securing American national security interests in Israel, Iran and the greater Middle East. And their polling in that campaign has scarcely been better.

Back in 2011, Secure America Now, at the time a new advocacy 501(c)4 group, commissioned a poll from pollsters John McLaughlin and Pat Caddell. The poll’s findings included the prediction that “only two in five Jewish voters (43%) say they would vote to re-elect President Obama,” (Obama won reelection with 69 percent of the Jewish vote) and fear-inducing language such as “93% [of Jewish voters] are concerned about Israel being threatened by Arab nations and Iran that want to destroy Israel.”

The poll was ridiculed as an “advocacy poll” intended to produce a specific outcome, but the origins of Secure America Now raised even more questions than the poll it released. At the time, McLaughlin, one of the pollsters, acknowledged to me that he and Caddell were involved in the founding of Secure America Now — the group that commissioned the poll — a fact that wasn’t disclosed by either side when the poll was published.

The organization’s actions in the subsequent years were marked by aggressive attacks – including calling for Obama’s impeachment – on the White House’s foreign policy.

Moreover, both groups share the same president, Allen Roth, but last year, One Jerusalem’s attorney told the Sunlight Foundation, “As of today they're completely independent organizations.”

One Jerusalem’s website also solicits donations for Secure America Now, characterizing it as beginning “in opposition to the Ground Zero Mosque.”  (Another hawkish pro-Israel Republican, Ronald Lauder, appeared to share office space with One Jerusalem at his foundation’s New York address.)

Neither One Jerusalem, John McLaughlin nor Secure America Now responded to requests for comment.

One Jerusalem’s commitment to Israel’s security stands in stark contrast with Secure America Now’s description of why it formed: because “our concerns have led us to create an organization that allows the American people to influence American security and foreign policy.” Secure America Now’s nonprofit foundation also makes no mention of defending Israeli security interests. “We are committed to educating the American public on the dangers posed to America by the development of nuclear weapons by Iran and radical Islam,” says the nonprofit’s website.

Secure America Now was in the news last month when it took Tea Party favorite Sen. Ted Cruz, R-Texas, on a weeklong four-country trip to Israel, Ukraine, Poland and Estonia, “to find answers to our world’s most pressing questions.”

A prospective budget filed with the group's application for tax exempt status in 2011 shows a target of  $8 million in incoming contributions and $4 million spent on “National Cable & Broadcast Television Advertising” in 2013.

But who is paying for all of this?

An examination of tax filings shows One Jerusalem’s 501(c)3 arm received the majority of its revenue from Republican billionaire and Las Vegas Sands CEO Sheldon Adelson. Its largest contribution came in the form of a 2007 grant of $1 million, which represented 84 percent of the group’s revenue in 2007 and just over 50 percent of the group’s revenue for the entire period from 2006 to 2012.

Adelson is an outspoken hawk – even going so far as suggesting a preemptive nuclear strike on Iran – and fervent critic of the Obama White House. Some of those views appear to be shared by Secure America Now and the polling conducted by McLaughlin.

Before the 2012 election, McLaughlin’s consulting and polling firm handled more than $300,000 in political ad buys for Secure America Now, according to FCC filings. While the content of the advertising isn’t specified in the filings, Secure America Now’s YouTube channel is full of ads criticizing the Obama administration’s foreign policy.

While one might expect this kind of advocacy in political advertising, it’s more troubling to find that the language used in McLaughlin’s polls regularly includes language that may bias the respondents.

Two months after the 2011 poll that found “only two in five Jewish voters” would vote for Obama, another McLaughlin and Caddell poll included questions with little grounding in facts, such as, “Do you approve or disapprove of a building a mosque near the of ground zero in New York City?” In reality, the Islamic community center in Lower Manhattan was two blocks from the World Trade Center site and also was not a mosque.

A Jan. 28, 2014, poll conducted by McLaughlin for the Zionist Organization of America, a group that has also received support from Sheldon Adelson and his wife, Miriam, stated a top-line finding of “Americans Show Overwhelming Support for Israeli Positions – Oppose Obama’s Positions,” but contained misleading questions. One read: “Should the United States pass stronger sanctions against Iran or should they weaken sanctions in order to convince Iran to stop developing nuclear weapons?” when the Obama administration's diplomacy with Iran has hinged upon reaching a comprehensive agreement limiting Iran’s nuclear program with safeguards to ensure Iran’s compliance. Sanctions relief, according to recent reports, would be a gradual process conditioned on Iran’s compliance with limits on its nuclear program, not a speculative exercise as suggested by McLaughlin.

When asked about the practice of biasing poll outcomes, Zogby replied, “It all depends what you want your reputation to be. If you want your rep to be, 'Hey I call people, I use scientific methods, but I have a point to prove because I'm a shill for an organization, then it's completely legit.’”

While Secure America Now, through its advocacy wing, is entitled to run campaigns attacking the White House’s Iran policy, McLaughlin’s decision not to identify his affiliation with Secure America Now while conducting polls commissioned by the group and promoting the group’s videos raises concerns.

“If you commission yourself [to do a poll] should you identify that?” asked John Zogby. "Yeah, call me old-fashioned."