Chuck Grassley and the GOP wildly spin an IRS email, and the media happily go along for the ride 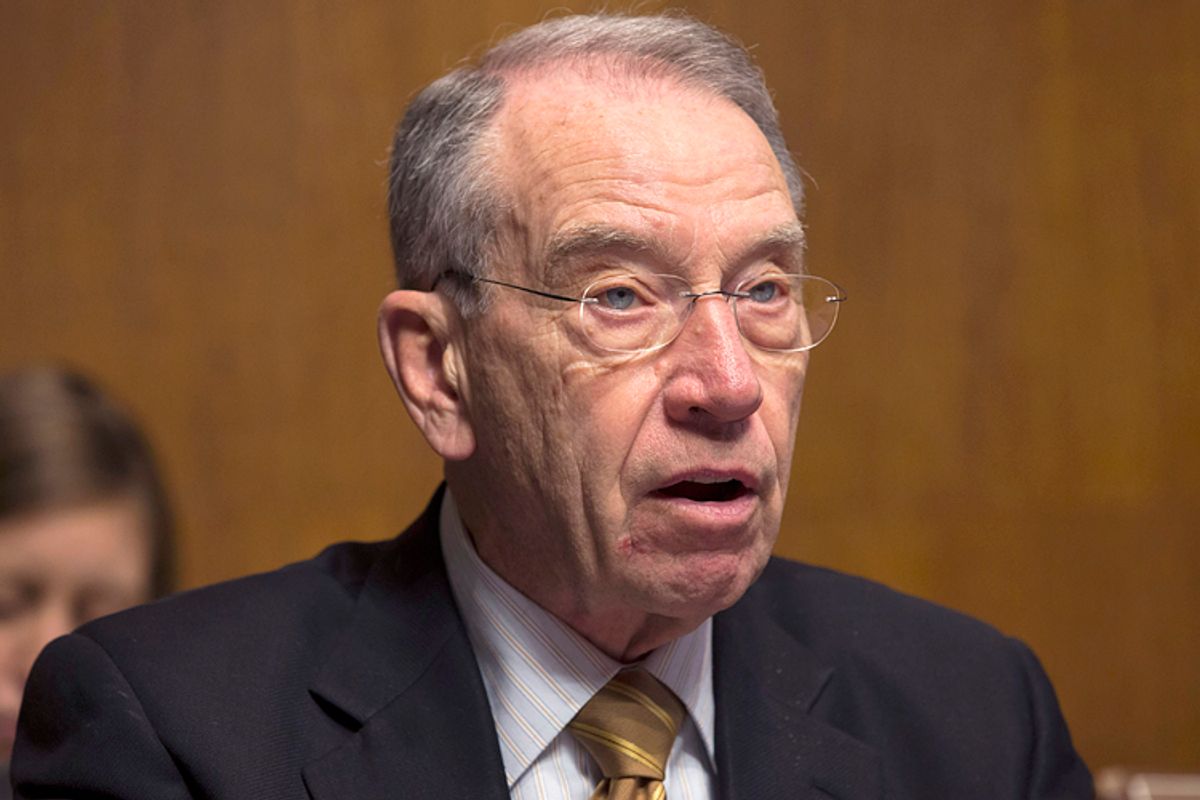 The latest big bombshell revelation churned out by the Republican scandal machine is that beleaguered former IRS official Lois Lerner tried to bring the full punitive might of the tax agency’s bureaucracy down upon the head of unassuming Sen. Chuck Grassley. According to Republicans in Congress, Lerner was so consumed by partisan animus toward Grassley that she made a “push to audit” the Iowa Republican. “Lerner was using the IRS as a tool for political purposes in defiance of taxpayer rights,” said Ways and Means Committee chairman Rep. Dave Camp.

It’s scandalous, frightening stuff. And every single word of it is garbage.

Here’s what happened. Lerner, while she was still director of exempt organizations at the IRS, mistakenly received an invitation intended for Grassley from a nonprofit group that wanted the senator to speak at some event. The invitation apparently included an offer to pay for Grassley’s wife to make the trip as well. Lerner flagged the invitation for one of the IRS’s lawyers, saying that she thought the group was “inappropriately offering to pay for his wife” and asked if the invitation should be “refer[red] to exam.” The lawyer wrote back and said it probably wasn’t worth investigating. Lerner agreed and the matter was dropped.

That’s it. She didn’t “seek an audit” of Grassley. She didn’t “target a sitting senator for a proposed internal audit.” And she certainly didn’t make any “threats to investigate Grassley.” She asked a lawyer a question, was told no, and moved on.

What we’re seeing here is a real-time lesson in how fake scandals are created and amplified. Lerner’s name is already controversial owing to her role in the IRS’s targeting of political nonprofit groups. That scandal stalled when it became clear that Lerner’s division wasn’t just scrutinizing Tea Party groups, as had been the original allegation, but Republicans aren’t willing to move on. A bombshell accusation that she personally targeted a Republican senator would certainly reinvigorate the notion that the IRS had become politicized under Obama, so Republicans in the House put some wild spin on this fairly innocuous email chain and let the press take care of the rest.

Here’s Chuck Grassley quoted in the Associated Press talking about the terrible ramifications of the harrowing email exchange that went nowhere:

"This kind of thing fuels the deep concerns many people have about political targeting by the IRS and by officials at the highest levels," Grassley said. "It's very troubling that a simple clerical mix-up could get a taxpayer immediately referred for an IRS exam without any due diligence from agency officials."

None of what Grassley says is “troubling” actually happened. He wasn’t “referred for an IRS exam,” the email was about the group that sent the invitation. And no one was “immediately referred” for anything – Lerner simply asked if the invite merited investigation. His complaint about the lack of “due diligence from agency officials” is absurd, given that she asked an agency official his opinion and the official wrote back to Lerner and told her she was wrong. That is what people typically refer to as “due diligence.” The AP, which had access to the full email chain and knew what the actual circumstances were, didn’t correct Grassley.

The story is driven by false GOP spin, and where there’s false GOP spin, you’ll find Fox News. “Lois Lerner targeted a sitting Republican United States senator. Stunning new email evidence shows Lerner referred Sen. Chuck Grassley of Iowa to the IRS for extra scrutiny,” Greta van Susteren said on Wednesday night, getting several key points of the story wrong. The pundit panel she hosted to discuss the story -- ABC News political director Rick Klein, Washington Examiner reporter Betsy Woodruff, and Hill managing editor Bob Cusack – all agreed that the email was significant, and deployed their best weasel words to explain why. “It seems to confirm suspicions around Lois Lerner and is just going to exacerbate all the political tension around this,” Klein said. “It sounds like there could be a deeper element to this story, and it’s hard to imagine it’s good,” said Woodruff.

Now we’re at the point where it doesn’t matter that Lerner didn’t actually “seek an audit” or “threaten” Grassley. All the news outlets that ran with the story could publish updates and corrections, and it wouldn’t change a thing to the conservatives and Republicans who believe it to be true. “Lois Lerner targeted Chuck Grassley” is now part of the Obama scandal lexicon. It’s an accepted truth, despite what the evidence tells them.