Libertarians' anti-government crusade: Now there's an app for that

Under the guise of the "sharing economy," more and more start-ups are pushing hard for free-market fanatacism 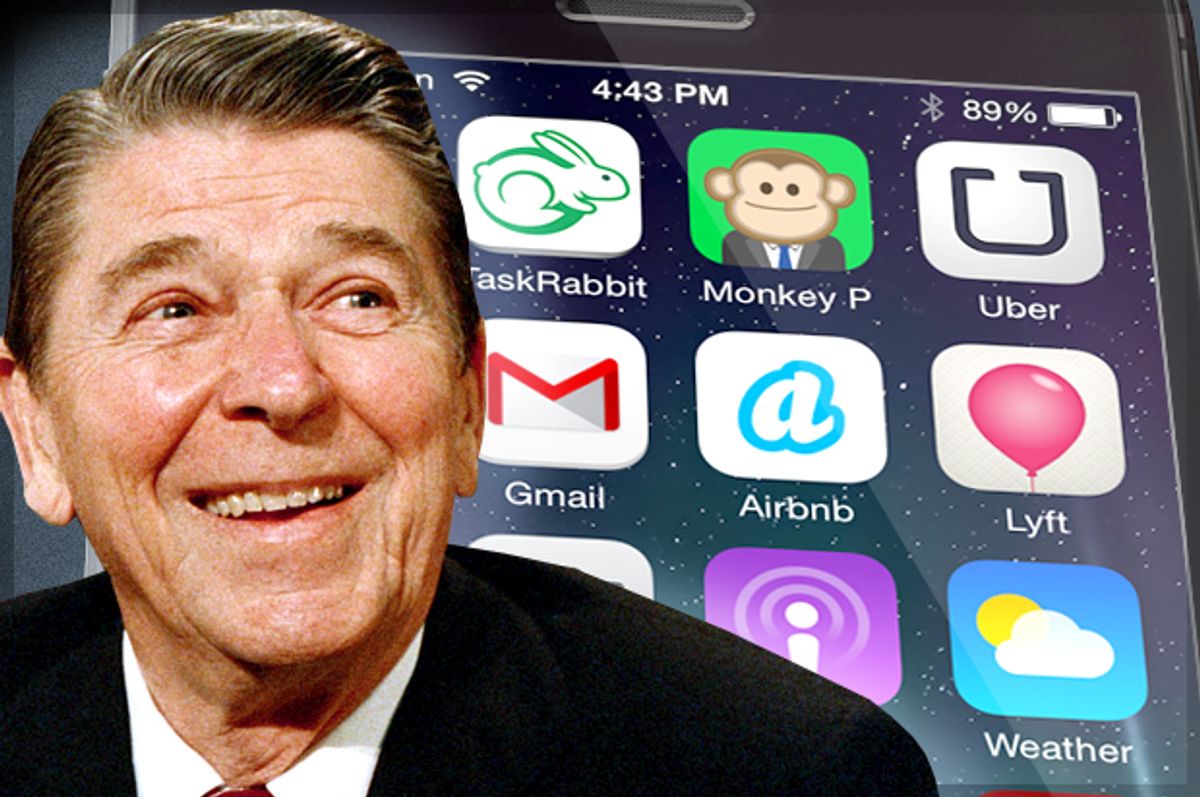 Over the past six years in Oakland, California, a woman named Asiya Wadud has organized a community effort to share the produce of local, privately owned fruit trees. In the East Bay, fruit from that fig or Meyer lemon tree in the backyard often goes to waste at harvest time. In "Forage Oakland," Wadud created a structure that encourages those who have to easily share their bounty with those who don't. There's no profit incentive, and signing on to the project turns out be a great way to meet your neighbors.

This, pretty much everyone would agree, is an inspiring example of the "sharing economy."

I became acquainted with Wadud's story last Sunday night via a short documentary shown at Oakland's Grand Lake Theater. But I had hardly finished digesting its heartfelt message of community connection when, on Monday, my Twitter feed filled up with stories about a cease-and-desist letter sent by San Francisco City Attorney Dennis Herrera to a start-up called Monkey Parking.

Monkey Parking is an app that enables auctioning off public parking spots to the highest bidder. Another, very similar parking app also deemed illegal went one step further: actively offering to pay car owners to squat in parking spaces, so as to provide valuable bootstrapping inventory.

This, pretty much everyone would agree, is an example of how the "sharing economy" can be totally bullshit.

It's rare that one encounters such easily defined ends of a spectrum. The truth is usually a lot more muddy. For example, Monkey Parking's CEO, Paolo Dobrowolny, attempted to confuse the situation by telling reporters that his company is just trying to do what Lyft and Airbnb and Uber -- other companies that "are continuously facing difficulties while delivering something that makes users happy" -- are doing: solve a market inefficiency (the lack of parking spots) with the convenience of a smartphone-enabled platform.

But there's an obvious difference: Monkey Parking's solution intended to generate profit off of a public good by rewarding those who are able to pay -- and shutting out the less affluent. That's outrageous and not something any civilized society should tolerate. (By way of contrast, you can make a decent case that an operation like Airbnb provides real value to the less affluent, both in savings on hotel rooms, and in earnings from letting out spare rooms.)

And yet at the same time, understanding where Monkey Parking crosses the line helps us better appreciate why we should hold up every "sharing economy" app to close scrutiny. The entitlement and obvious self-interest that led Monkey Parking to decide it could solve a San Francisco municipal problem with a blatantly illegal business model is shared by many "disruptive" entrepreneurs -- often cloaked under the cover of libertarian ideology.

More to the point: finding ways to exploit regulatory loopholes is another way to game public goods. If, for example, hotels have to pay taxes and abide by safety regulations that private homeowners do not, Airbnb gains a competitive advantage. Those safety regulations are a kind of public good. But the profit-focused sharing economy tends to see regulations as a hindrance. What we end up with, if we just let the disruptors proceed as they please, is the kind of digital economy Ronald Reagan might have envisioned. Government is an irrelevant obstacle, while the benefits of sharing economy apps trickle down to everyone!

Monkey Parking might have been slapped with a cease-and-desist order, but it isn't giving up without a fight. In a statement sent to Ars Technica, CEO Paolo Dobrowolny claimed that the First Amendment rights of Monkey Parking's users were being infringed. He vowed to fight.

...MonkeyParking claimed that it was, in fact, not auctioning off public parking spaces. Rather, the company says it auctions off information about the parking spaces.

“The real issue here is that a local ordinance is being misapplied to wrongfully target our service,” the company said. “This is happening with our company and other companies operating in the social sharing space. This is yet another example of a local ordinance that was drafted in a world pre-shared economy which local authorities are improperly applying to a shared economy service.”

Let's take a moment to appreciate the chutzpah at work here. Monkey Parking is an Italian start-up based in Rome. Dobrowolny is claiming the right to operate as he pleases in a foreign municipality and even dares to claim that his business model is constitutionally protected free speech! Talk about your classic  transnational neocolonialist libertarian arrogance! In Dobrowolny's world, borders are a meaningless social construct and the clear interest a municipal government might have in preventing predatory hoarding and auctioning of a public good -- parking spaces -- is statist piffle! Italian software developers know better than the "local authorities" what's right for San Francisco.

Dobrowolny's position is extreme enough that even the assembled commenters at Hacker News, who normally tend toward a fairly doctrinaire techno-libertarian point of view, were generally agog at the ridiculousness of Monkey Parking. And yet, at the same time, Dobrowolny makes an argument sure to be familiar with anyone who has been following the ongoing showdowns between sharing economy companies and the state. Because we are dealing with information, we are not subject to the same rules as the incumbent dinosaurs we aim to drive extinct.

The creators of these platforms can pretend all they want that they are just dealing with information, but people will continue to get injured or killed in car crashes, and disastrous gas leaks will likely occur in Airbnb properties; heck, someone might even get food poisoning from a rotten Temescal plum. Liability will be assessed, regulations will be applied, and there is absolutely no reason why the platforms that aim to make huge profits by providing the necessary information that put people in harm's way or otherwise exploited them will be held any less responsible than the companies that thrived in a "world pre-shared economy."

I propose a test: In the future, when evaluating the social righteousness of a sharing-economy app, let's try to figure out which end of the spectrum it is closer to.

At one end, I give you an excerpt from the Forage Oakland manifesto:

The gleaning of unharvested fruits; the meeting of new neighbors; the joy of the season's first hachiya persimmon (straight from your neighbor's backyard, no less); the gathering and redistribution of fruits that would otherwise be wasted- can be powerful and can work to create a new paradigm around how we presently think about food in our collective consciousness. Imagine gathering several friends for morning, midday, evening or weekend foraged city bicycle rides through your neighborhood. Rough maps are drawn, noting the forage-ables that can be found at each location and 'cold calls' are made to your neighbors asking if you can sample a fruit from their backyard tree. You have the courage to introduce yourself (despite the pervasiveness and acceptance of urban anomie) and they reward your neighborliness with a sample of Santa Rosa plums, for example. Later, when you find yourself with a surplus of Persian mulberries, you- in turn- deliver a small basket to said neighbor. With time and in this fashion, a community of people who care for and know one another is built, and rather than being the exception, this could be the norm. This is not idealistic, rather it is necessary, pragmatic, and creative-- especially in times when much of the world is suffering from lack of access to healthful and satisfying fresh food. Forage Oakland is a project that works to construct a new model-- and is one of many neighborhood projects that will eventually create a network of local resources that address the need and desire for neighborhoods to be more self-sustaining in meeting their food needs.

At the other end of the spectrum is a guy sitting in a Tesla outside an artisanal rye whiskey bar in the Mission, fielding bids for his cherry parking spot while around him local residents circle hopelessly looking for an opening. On this end of the spectrum, selfishness is rewarded, community isn't even in the ballpark, and inequality gets a boost.

Monkey Parking deserves kudos. By heightening the contradictions inherent in the profit-seeking sharing economy, the app does us all a huge favor.