Once a defense of the war on terror, Michael Bay's robot franchise mirrors the GOP's decline into paranoid whining 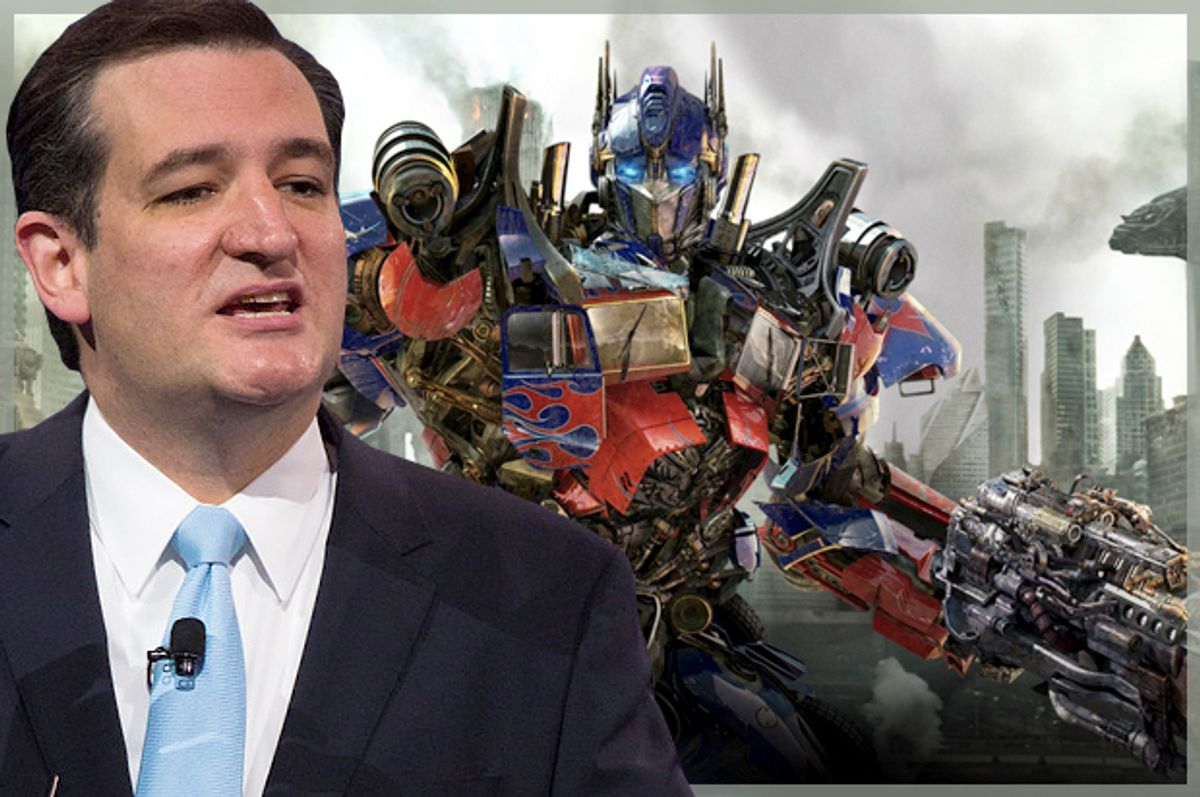 There’s a general feeling of distress and bewilderment to “Transformers: Age of Extinction,” Michael Bay’s latest inflated, interminable and incoherent 3-D saga of robot warfare. At least some of that distress is political: The “Transformers” franchise has gradually become alienated from its Bush-era roots in gung-ho, pro-military, “Mission Accomplished” jingoism. It now partakes of a free-floating, ill-defined, Ted Cruz-style paranoia that is both psychically dispirited and distressingly low in testosterone. (There are nearly no gratuitous shots of female pulchritude in this movie, and the only suggestion of actual sexuality is a disturbing interspecies attempted rape.) I’m halfway surprised that the script for “Age of Extinction” didn’t drag in a Benghazi reference somehow. Maybe it did and I missed it; you can’t sit through a 166-minute robot-warfare movie without occasionally slipping into a fugue state. I’m going to say that again: ONE HUNDRED AND SIXTY-SIX MINUTES. That’s exactly one minute longer than the re-edited version of Andrei Tarkovsky’s medieval odyssey “Andrei Rublev,” perhaps the most legendarily arduous art film of all time. Coincidence? I think not.

If it sounds dumb to describe “Age of Extinction” as bewildering and pointless, given that it’s the fourth installment in a franchise that has concocted an arcane mythological back-story out of a line of toys popular with 10-year-old boys in the 1980s, all I can say is welcome to the world Bay has made, where we are all measurably stupider than we were before. Also revealed on our show today: The sky is blue (unless it’s raining) and the Catholic Church may have issues with human sexuality! There are many reasons that “Age of Extinction” is a total mess, even when we move past the fact that it’s a mess because it’s a Michael Bay movie. And although it has become patently obvious that Bay is kind of a right-winger, his movies are more about servicing the stunted psychologies of teenage boys than about any coherent ideology. Believing that military hardware is awesome, and blowing stuff up is even better, does not really qualify as a political position.

This time around, Hollywood’s master of excess finally seems exhausted, in both formal and narrative terms, by the stupefying idiocy of this franchise. If you haven’t been paying attention, that’s actually a new state of affairs: You can accuse Bay of many things, but never before of being bored with his own work. When you reach the decadent phase of the “Transformers” series, which was designed in the first place as the epitome of id-fueled overkill -- my friends, that is some serious decadence. That’s Louis XIV in the recliner with a pile of thong-clad honeys and five boxes of donut holes from Dunkin, watching a highlight reel of Best Reality Show Catfights. There’s an entire scene in this movie in which the protagonists hide out from evil government forces and evil Decepticons and evil whoever-else by sleeping in an abandoned mid-century passenger train. During that scene I woke up enough to think: Wait, what? Where are these people, and why are they doing this, and what relevance or resonance does this have to the so-called plot? No answers.

There’s an earlier scene when one shot shows us the setting sun, a melting glob of orange sherbet descending behind a flat Texas landscape – one of about five “magic moment” sunset shots milked for nebulous non-meaning in this movie -- and then in the next shot (and for the rest of the scene) it’s clearly the middle of the afternoon. One of the things that’s impossible to decipher about Bay is whether or not he's basically been punking us the whole time. He clearly possesses some awareness of his own tics and tricks and obsessions, some meta-consciousness about the manipulative character of his work and his relationship to the audience, but not enough to simply throw it all away and go study the Hindu scriptures or something. (He may make movies aimed at notional heartland teens, but in real life Bay was an English major at Wesleyan, and a favored student of film historian Jeanine Basinger.) So I partly suspect that he’s pulling our leg in making a $165 million action spectacle that features elementary continuity errors, product placement for Chinese soft drinks and a running time – did I tell you this already? – of 166 minutes, at least 40 or 50 or 60 of which are not strictly necessary. OK, duh, I get it: None of it is necessary, and Bay is playing out some kind of sadomasochistic power exercise.

Thing is, sadomasochistic power exercises can be fun, and this one is often painfully dull along the long road to the admittedly magnificent action climax, when Dinobots get hatched out of the earth (don't ask) and a giant magnetized spaceship starts sucking the ships out of Hong Kong's harbor and raining them down on the city. If you want to belabor the question of Bay’s self-awareness some more, I refer you to “Pain & Gain,” his idiot-genius version of a postmodern social satire. Except, wait, no: The last “Transformers” movie, the massive international hit “Dark of the Moon,” was Bay’s version of a postmodern art film, and carries the mark of his studies with Basinger. I'm not actually kidding. To amplify critic David Ehrlich’s description, “Dark of the Moon” was the meth-baby offspring of Stan Brakhage and Luis Buñuel, except with giant robots and a shot of a Victoria’s Secret model’s bum as she ascends the stairs.

The unhinged political paranoia I mentioned above was already present in “Dark of the Moon,” which featured a conspiracy-theory take on the Soviet and American space programs and indeed the entire Cold War. But that film’s madness was thoroughgoing and enthusiastic; it was inarguably a much better movie than “Revenge of the Fallen” (No. 2 in the series) and it made oodles of money. It should have concluded the trilogy and provided Bay with a measure of semi-demi-vindication (which is the only kind you can get when you’re him). It was the nightmarish, Nietzschean fulfillment of the summer-movie aesthetic, a movie that seemingly had eaten all of pop culture and vomited it back up again as shards of metal. One example: It featured the real Leonard Nimoy as a robot god and also a clip from a "Star Trek" episode and hidden snippets of sampled Nimoy dialogue from a “Star Trek” movie. It was an exercise in ultimate sensual gratification that ended in the nuclear annihilation of all pleasure. It embodied every genre of film at once, each contaminated by its opposite: In retrospect, its dopey domestic-comedy scenes showed us the twitchy spectacle of Shia LaBeouf descending into madness. He was far more disturbing in that movie than in Lars von Trier’s “Nymphomaniac.”

But Bay, of course, could not stop himself from coming back to a drained well and sucking the mossy ooze from the walls. And so we get the nearly lifeless “Age of Extinction,” which has a tenuous relationship to earlier installments and none of the same human characters. No LaBeouf and his goofy parents, no Victoria’s Secret model, no John Malkovich or John Turturro. Much of it is a tepid father-daughter farce about hapless Texas inventor Cade Yeager (Mark Wahlberg) and his efforts to protect the virtue of his smolderin’ teen offspring Tessa (Nicola Peltz). Screenwriter Ehren Kruger seems to have recycled that material from a 1961 Disney comedy, and not in a good way. In between Texas sunsets, Cade and Tessa and Tessa’s hunky Irish boyfriend Shane (Jack Reynor), of whom Dad humorously disapproves, become the targets of government oppression, thanks to some third-rail, black-helicopter alliance between the CIA and an intergalactic bounty-hunting Transformer apparently called Lockdown, who appears to have been newly cooked up for this movie.

For some reason that I can’t quite explain, the U.S. government has broken its alliance with the Autobots (i.e., the good robots) and their benevolent leader Optimus Prime (still voiced by Peter Cullen), even though those guys saved our asses from being conquered and enslaved by the evil Decepticons, who are supposedly all dead. Lockdown has come to Earth to hunt down the last surviving Autobots because, um – I think because some big off-screen alien intelligence told him to, but don’t quote me. On the most obvious level, Kruger and Bay are just rolling with the punches, which is what Hollywood movies always do: All of a sudden we don’t trust the spy agencies or Congress or the president, and we feel a little iffy about rich people in suits. So the litany of villains here includes Kelsey Grammer as a treasonous CIA director and Stanley Tucci, terrifically funny as a Strangeloveian corporate scientist who longs to engineer his own Transformers. Not to mention a sinister black-ops military team that threatens to torture Cade or kill Tessa, and blows up their farmhouse for no particular reason.

All this is quite a turnabout for a franchise that began with hyper-patriotic swagger, assuring us by way of none-too-subtle metaphor that the war on terror was awesome and that diplomacy and negotiation were for pussies. While “Revenge of the Fallen” explicitly depicted the Obama administration as pusillanimous appeasers, the unnamed president in “Age of Extinction” is an ineffectual patsy controlled by outside forces, hopelessly in the dark about Grammer’s secret dealings with Lockdown and pretty much everything else. If the overarching conspiracy theory of “Dark of the Moon” had a crazy, Kubrickian grandeur, this movie seems to have been derived from the sour and dissociated ravings of a mid-afternoon Limbaugh caller. Our own government is spying on us and corporations are evil and terror cells are everywhere and WTF I don’t even recognize my own country anymore. And holy crap Benghazi. It simultaneously laments the fact that we aren’t an ass-kicking fascist superpower anymore and proclaims that you can’t trust the government, while pretending not to notice the contradiction.

Even the patriotism of “Age of Extinction” is low-wattage and feels fake. We get “ironic” shots of the American flag fluttering behind Tessa’s face in the humid Texas breeze while the black helicopters descend on Cade’s farm – but this is also an outsourced movie, a Chinese co-production shot partly in Hong Kong with a prominent supporting role for Chinese star Li Bingbing. (Scenes supposedly set in Beijing, however, were shot in Detroit, which is somehow funny.) This franchise is enervated and bloated, running on fumes, hypocritical and openly contemptuous of its audience, all of which makes it strongly resemble the modern-day American conservative movement. Despite all that, or maybe because of it, it will make tons of money and fuel another sequel – just in time for Ted Cruz’s presidential campaign, evidently – with yet another threatened after that. It’s really quite sad: We have lost our faith in giant robots and the Republican Party, but we still need them around to destroy things.