"The Leftovers" confuses darkness for depth

The new HBO drama about the Rapture is intensely gloomy -- but underneath all its brooding, it has nothing to say 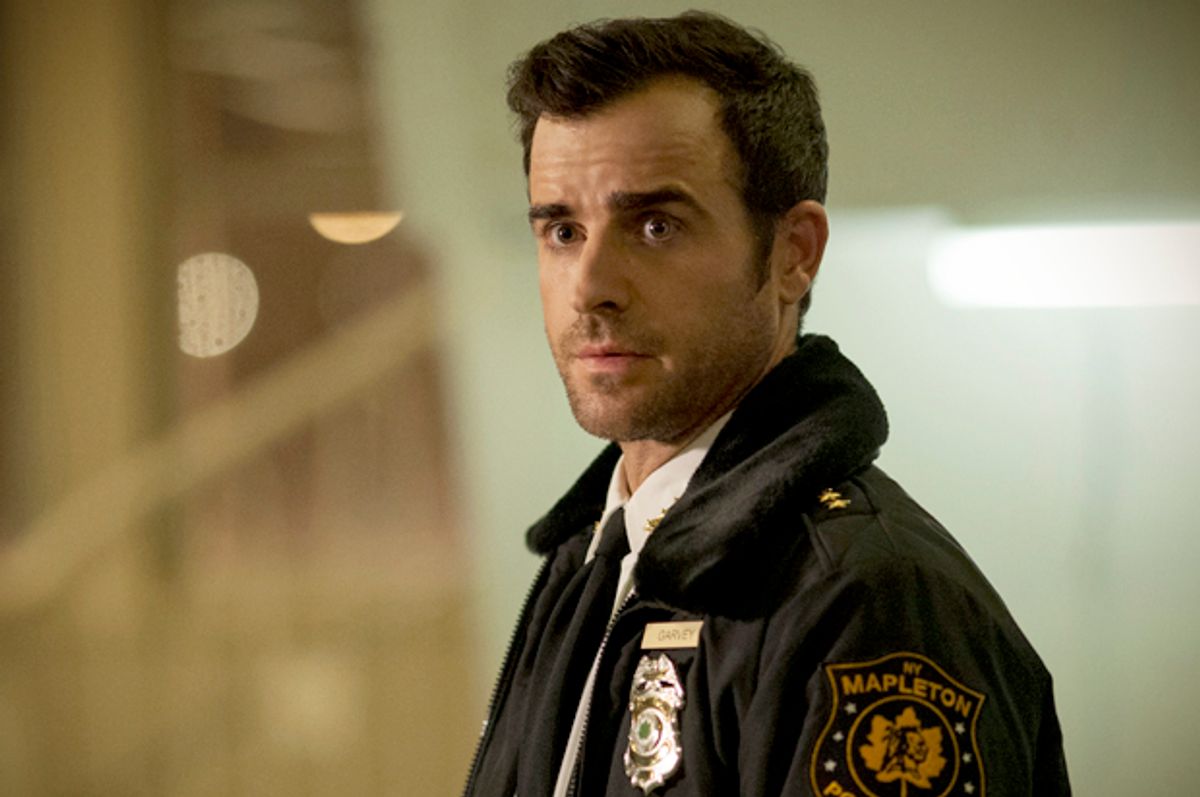 It's tempting, given the network's rich back catalog and the sense it fosters of being self-consciously different from the rest of television, to compare each new HBO series to the ones that came before. "Game of Thrones" has the same complex web of relationships as "The Wire"; "Boardwalk Empire" promised and maybe didn't deliver the rewarding insights into the American criminal psyche that we got from "The Sopranos." "Girls," before it was released, was widely perceived as the younger "Sex and the City" -- and though that didn't end up being quite true, nobody saw the irony in calling "Looking" the gay "Girls."

It's nearly as much of a stretch, though, to say that "The Leftovers," HBO's new drama series about the aftermath of a mysterious Rapture-esque event, has a very clear antecedent -- the undersung early-2000s series "Six Feet Under." Both series dealt with the mysteries of life and death in a straightforwardly depressive manner, making no bones about the fact that the world is a cruel place and that we mortals have no choice but to scrabble along as best we can. But even when "Six Feet Under," which opened nearly every episode with a death, failed to provide uplift, there was some insight other than that suffering is no fun. "The Leftovers," in its early episodes, does an expert job of sketching out a brutal world much like our own. It's done a terrible job of convincing us why we ought to care.

"The Leftovers," based on the Tom Perrotta novel of the same title, takes place three years after the events of "October 14," a cataclysmic day on which 2 percent of the world's population simply disappeared; no explanation is provided in the novel or so far in the series, and none is needed. But the show needs to, as it goes on, give us something other than the unremitting misery of the Garvey family. All four members of our central clan were effectively broken by the experience of the 14th: Dad, the town's police chief, is falling apart, not least because his son's gone AWOL to follow a religious leader, his daughter's off partying in scenes imported from a different show, and he's forced to deal with the law-enforcement issues around the cult Mom joined, one whose members take vows of silence and smoke constantly.

Justin Theroux (a "Six Feet Under" alumnus) does a serviceable job as Kevin Garvey, with some pretty lame material. He punches a framed picture of his once-perfect family on the wall at one point, and later on grows enraged at a toaster. He's not a character yet, just the personification of rage, and it feels a bit easy: If Kevin's not in touch with his emotions, the writers don't have to deal with those emotions yet. (The novel gives us access to his internal monologue, without which he just seems like a ragey lump.) We aren't allowed to get to know his wife, played by Amy Brenneman, really, but that's by design. Her membership in the Guilty Remnant and that group's odd bylaws -- following those citizens who are just trying to move on with lives to mutely watch them, cigarettes in hand -- and murky endgame are the show's most interesting ideas.

But it adds up, in the show's first five episodes, to nothing much. The notion of those 160 million people (if my math is right) vanishing is indeed mind-boggling, but aside from the Remnant, this world doesn't actually feel like one with much dramatic possibility. An episode focused on the local priest, whose rage and confusion has hardened into defaming the disappeared, takes every dramatic turn I'd come to expect -- I asked myself at each plot inflection point what the darkest thing that could happen would be, and was never wrong, though I was disappointed.

More generally, the degree to which the Garveys are denying their own emotions doesn't give us much to grab onto on a dramatic level. If the show doesn't want to ask why all those people disappeared, that's fine -- but it ought to ask itself how to communicate its characters' inner lives in a way that actually says something new.

Much has been made of the fact that this show comes from Damon Lindelof, whose work on the resolution-less "Lost" received much criticism. But it's not the possibility of an inconclusive ending that's worrisome about "The Leftovers" -- it's the possibility that we'll never actually get to know the characters as anything more than Suffering People. HBO isn't subject to the rules of broadcast TV (which are the rules that resulted in a strange, sentimental "Lost" ending), and so can make a show just as dark as it wants -- but this time, they've lost their footing, falling headlong into the trap of thinking human suffering is ipso facto fascinating.

The most interesting thing about a world after the Rapture is not that those who remain are miserable and wallowing. That's the presumption the show ought to have worked through before getting to the real stuff, were it not the endpoint of a decade's worth of cable TV that confuses darkness for depth.