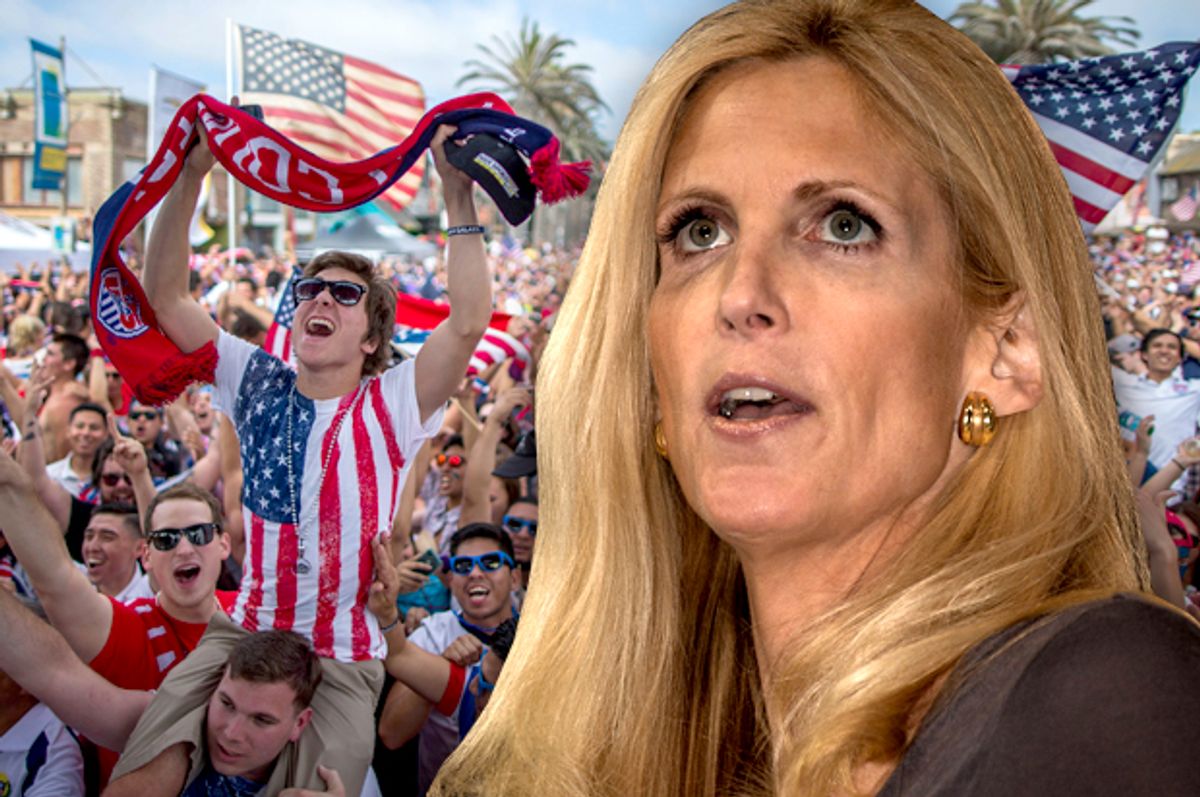 With her recent column explaining how the rise of American interest in the World Cup is "a sign of the nation's moral decay," Ann Coulter successfully sent readers around the world into gales of horrified laughter and generated god only knows how many hate-clicks.

Whether she actually believed what she was writing is moot. Coulter's provocations are best treated as performance art. But there's also no doubt that she was playing on conservative insecurities about change and globalization and multiculturalism that are quite real. A generation of Americans feels its cultural-superpower primacy slipping away, replaced by something it would rather mock than understand or celebrate.

It's scary stuff! We've got a black president and our neighbors are hooting and hollering about the World Cup. You can practically hear the pearl-clutching: What's happened to our once great nation!? And why the hell won't all these obnoxious people on Twitter just stop going on and on and on about it? Reuters columnist and confirmed curmudgeon Jack Shafer got so fed up with all the World Cup chatter that he devoted an entire column on Friday to explaining why he was unfollowing everyone who committed the sin of so much as retweeting a single Cup-obsessed comment.

It's mean and unfair to lump Shafer and Coulter in the same paragraph, but there is a connecting thread linking their disdain. Once every four years, the entire world explodes into an obsessive conversation about sports that incorporates and is inseparable from historical narratives of race and culture and nationalism. In many countries, soccer is politics. When the World Cup crests, it's the biggest thing happening on the planet.

Shafer doesn't want to hear that conversation. Coulter and her ilk are actively terrified of it. Because the fact that the U.S. is finally joining in is a sign that we are gradually becoming part of this world rather than lording over it or building walls to keep it out. On the pitch, Mexico is our equal, instead of a source of cheap labor and cheaper thrills. Our stars are neither the biggest nor the brightest. We can't samba like the Brazilians or pass with the crisp efficiency of the Germans.

But it's really cool that we're in the mix. Now is the worst possible time to turn down the Twitter volume. Turn it up! The jokes; the political resentments, the exultation -- it's not just the sound of a truly global culture. It's the sound of the future.

In the summer of 1990, I stood in Hong Kong's Central Station, staring at something I didn't understand. A live soccer game was being projected on a station wall -- and hundreds of commuters had stopped to watch a couple of South American teams kick a ball around in Italy.

I had been in Hong Kong for several weeks, interning at a magazine, and this was the first time I'd seen anyone dawdle or linger about. There were no moments to waste in East Asia in the early '90s. My clearest memory from those days was of young men galloping up the escalators from the bottom of Central Station to the point where they could get reception for their brand-new (and very bulky) cellphones, and start cutting deals. Back in the States we were still figuring out fax machines.

Yet here was a crowd, watching Diego Maradona work his wiles against the mighty Brazil. South Korea, the only East Asian team that managed to qualify for the 1990 Cup, had already been ignominiously eliminated, manhandled with ease by Belgium, Spain and Uruguay. The cultural connection between Hong Kong and the screaming crowds 6,000 miles away seemed tenuous, at best.

Whoa, I realized, as I watched the watchers. I guess that's why they call it the World Cup.

Yes, once upon a time, you had to physically leave the United States to appreciate that every four years the entire rest of the world convulsed in a month-long frenzy of passionate fandom. But that's all changed. Now that the U.S. has reached the knockout round twice in a row, and a couple of generations of soccer moms have done their work providing logistical support for young Americans to master the game of futbol, and globalization and the Internet have collapsed the borders that used to separate us, it's a quite different story. More Americans watched the U.S. tie Portugal than the World Series or NBA Finals. Massive crowds gather in public spaces to watch the games. We're all in, finally.

The clamor on Twitter marks a clear sea change. It was nothing like this last time around. It's easy to see why people like Coulter are upset. If she really believes, as she claimed in her column, that American love for soccer is a result of immigration over the last four years, then Twitter is a place where the border fences have permanently collapsed and no one is checking passports. Social media has been overrun! There's nowhere to hide and immigration reform won't make it go away!

It's a little harder to understand Jack Shafer's decision to be so public about his desire to check out.

As a soccer agnostic, with no hatred for or interest in the game, these many tweets hold a negative value for me....

My opposition to sporting tweets, while deep, is not absolute. You’ve got to expect a Twitter din during college football bowl season, the World Series, Wimbledon, the Masters, the Triple Crown, the Stanley Cup, the Super Bowl, and other events. But none of these spectacles run on for a month like the World Cup.

I can understand why someone with no interest in soccer would be bored by the World Cup. But there's a peculiar defensiveness to Shafer's public posturing, to his need to explain why the rest of the world's delight holds a "negative value" for him. He'll accept sporting tweets for the World Series and the Triple Crown, but not for a phenomenon that, frankly, makes the World Series look like a Little League competition in Poughkeepsie. Sorry, Jack, but I think you've got to expect that the biggest sporting event in the world is going to dominate the conversation every four years. Publicly trumpeting how you are cutting yourself off from this dialogue is an unworthy form of American isolationism.

But at least Shafer is resisting the tide based on little more than sheer annoyance. Whether she's pretending or not, Coulter is giving voice to those who see soccer as a threat to American exceptionalism and preeminence.

Their deprecation is rooted in fear and ugly xenophobia, and that's just sad. Because there's nothing to fear here. One of the things you begin to understand as you fall deeper under the spell of the World Cup is that soccer on this grand stage is the closest thing we have on this planet to a language that everyone can understand; whether they are Cantonese speakers in a Hong Kong subway station or favela-dwellers in Rio or corn-fed Iowans in a bar in Sioux City. It's an irresistible new world order. Next time around, the volume will be even more deafening.