I'm sorry I apologize so much

Women like me constantly use the dreaded phrase, even when we know we shouldn't. So why do we keep doing it? 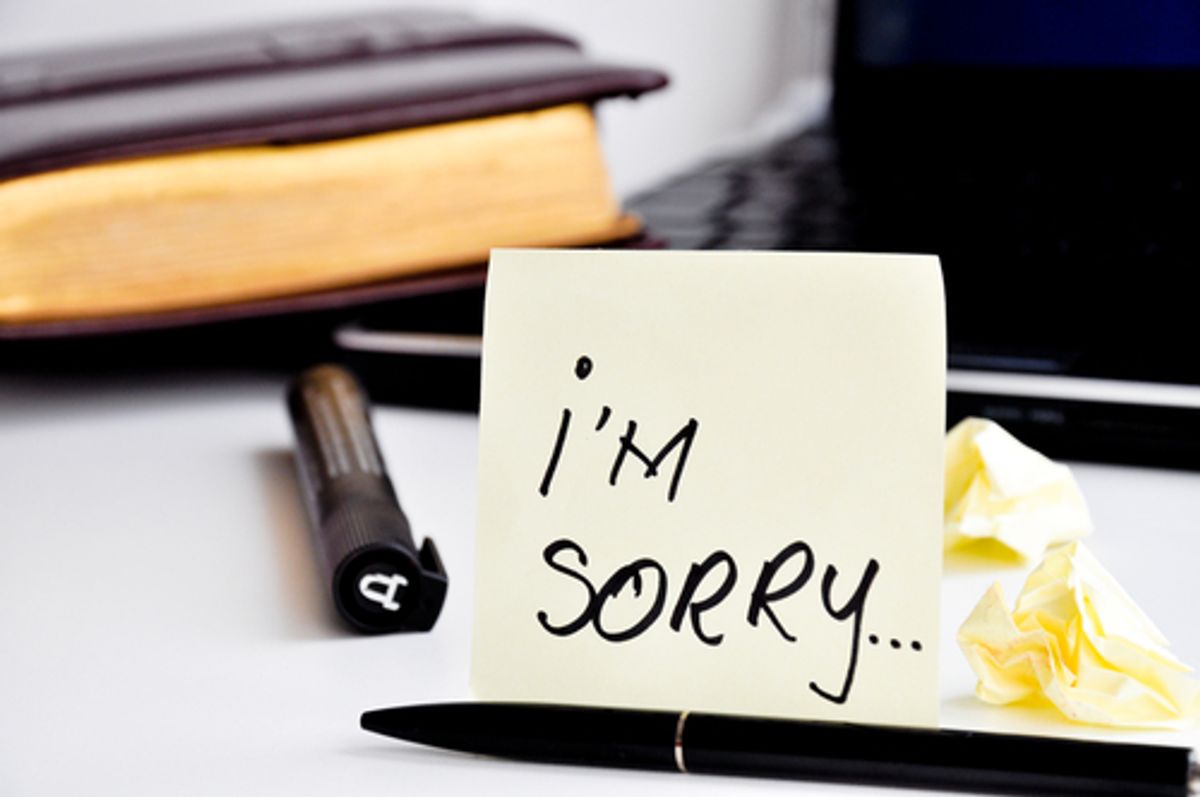 When I was 6, my constant refrain, encouraged by a friend (though “frenemy” is probably more accurate) was, “I’m sorry, do you still like me?” I don’t remember all the details, but the words left my mouth with such frequency they surely ceased to mean anything. I’m more disturbed that over 30 years later, at my core, I haven’t changed all that much—that desire to be liked by everyone seeps into my vocabulary and way of thinking on a daily basis, and the fear of not being liked may lead me to lean in less, and kowtow more.

Last week, controversy erupted over yet another viral ad by Pantene that tackled the highly gendered issue of apologizing. Titled “Sorry, Not Sorry,” it shows women apologizing for asking a question, for speaking at the same time as someone else, and a host of other everyday interactions.  and was both lauded for its blunt approach to the topic and criticized for adding another “should” to women’s daily lives and capitalizing on the language of feminism. The ad is part of Pantene’s "Shine Strong" campaign, which tells us “Strong is beautiful.”

More from DAME: "I Don't Want to Be the Town's Token Black Family"

I’m not going to get into the merits of their campaign, because I’m much more interested in the fact that the desire to apologize is so deeply engrained into my mindset—and many other women’s. In the past week, I’ve had a friend in the midst of a major move apologize for not being in touch, another friend apologize for not having more time off to spend with me during my vacation in her area of the country, and an editor apologize for not being able to accept a pitch of mine. In my opinion, none of these warranted an apology.

I’m as guilty as I was when I was 6—except at 38, I should know better. Yet I don’t. When I mentioned I was writing about apologizing, my boyfriend told me, “You do it all the time.” I’ve debated over how to follow up about work prospects because I didn’t know if I should lead with “I’m sorry to bother you”—even if I wasn’t—or to simply launch into my question. I’ve apologized to my dentist for waiting so long in between appointments, to a colleague for asking to reschedule a meeting, to friends for not giving clear enough directions, and for accepting an offered ride when I could have taken a train. When I make little apologies, they often come from a place of deep insecurity. I don’t want to offend the other person, or burden them, and I think that if I don’t apologize, I’ll be seen as ruthless and selfish.

Yet the worst thing the other person can say—despite my doomsday negative fantasies—is "No." Recently, I was staying with a friend visiting New York with her daughter, crashing on her hotel room’s sofa. The next day, her father came to visit, and I wasn’t sure if they had room for me to stay another night. Instead of just straight-up asking, I waited and waited, worrying she'd either a) say yes but resent me, or b) be offended that I’d asked. I was apologetic about even making the request, as if our friendship hung in the balance. In a way, I’m grateful she said no, because I found out that it wasn't the end of the world—I found another place to stay, and the matter was soon forgotten, save for my takeaway lesson: that it’s better to ask whatever question you need to ask fast, like pulling off a Band-Aid, rather than prolonging it and going over umpteen what-if scenarios in your head.

More from DAME: "Is 'Superman' the Greatest Adoption Story of All Time?"

The unnecessary apology is a preface that allows us to be absolved of our imaginary sins, but hinders true communication. Women do it for the same reason we hesitate to promote ourselves: because we want to be seen as friendly, easygoing, accommodating. We don’t want to step on anyone’s toes, but in the process, we’re stomping all over our own. When someone tells me they're sorry for something I know they don’t have a good reason to apologize for, I'm taken aback. I start to wonder why they’re apologizing, because it undermines the meaning of that apology, rendering "I'm sorry" meaningless.

In a 1997 interview with The Paris Review, playwright Wendy Wasserstein was asked, “You are known for being nice. Can a woman afford to be too nice?” This is how she responded:

I have a great interest in being ladylike, but there is also something to be said for being direct. What I hate about myself and would like to change is that I get hurt very easily. I’m too vulnerable and always have been. I don’t look vulnerable. I always think vulnerable girls should have Pre-Raphaelite hair, weigh two pounds, about whom everybody says, "Oh, she’s so sensitive." I admire aggressiveness in women. I try to be accommodating and entertaining, and some say that’s what’s wrong with my plays. But I think there are very good things about being a woman that have not been taught to men—not bullshit manners but true graciousness. I think there is real anger in life to be expressed, there is great injustice, but I also think there is dignity. That is interesting, and part of the plays I want to write.

What I love about her answer is that she admits to that vulnerability openly, rather than couching it behind an apology or need to be seen as overly strong, 24/7. Being vulnerable is something that’s been tagged “female” but is in fact a human emotion, and can co-exist with strength and even the aggressiveness Wasserstein spoke of. To me, embracing my vulnerability probably always will be a challenge, whether it’s with those closest to me or perfect strangers. Because I never learned to develop an even marginally thick skin, I resist leaving myself open to being hurt or even criticized. To combat any potential barbs, I apologize in advance, so people know that I know how wrong I am, to my core. Beneath my penchant for apology is a belief that someone else’s answer is always going to best mine, and that unless they agree with me on every point, I should be apologizing.

More from DAME: "What I learned About 'Myself' from My Trolls"

The rational side of me knows that unless I’ve truly wronged someone, I don’t need to apologize, but the urge persists. At Time, Jessica Bennett writes that “sorry” is “a tyrannical lady-crutch. It’s a space filler, a hedge, a way to politely ask for something without offending, to appear ‘soft’ while making a demand.” Indeed, and it’s deeply gendered. In a 2010 study published in Psychological Science, women reported apologizing more frequently, which researchers concluded was in part because men “have a higher threshold for what constitutes offensive behavior.”

Linguist Deborah Tannen claims we don’t have to apologize for saying “sorry,” though, because it’s not always meant as an expression of personal apology. As she told New York magazine’s Science of Us blog, “It’s focused out—as in, ‘I’m sorry that happened’—but is often taken as an expression of an internal state, as in ‘I think everything is my fault.’” I can’t help but think that even the passive type of “sorry” is still overblown, and can make the person saying it somehow believe they’re to blame, even if all they’re saying is, “Sorry the weather’s so bad today.” Of course they know they have no control over it, but by apologizing anyway, they’re taking on some of the blame by default.

I’m planning to try to guard against over-apologizing the way I guard against biting my nails—by stopping myself mid-action. Like tossing around the word “love,” when used too often, the reflective, almost subconscious apology fails to have any substantive meaning. I make my fair share of actual mistakes, and those deserve the gravity only a true apology can bring, the kind that requires far more careful though than a hastily tossed out “I’m sorry.”