Art in the age of Instagram: Jeff Koons' exhibit is a playground for selfie-takers 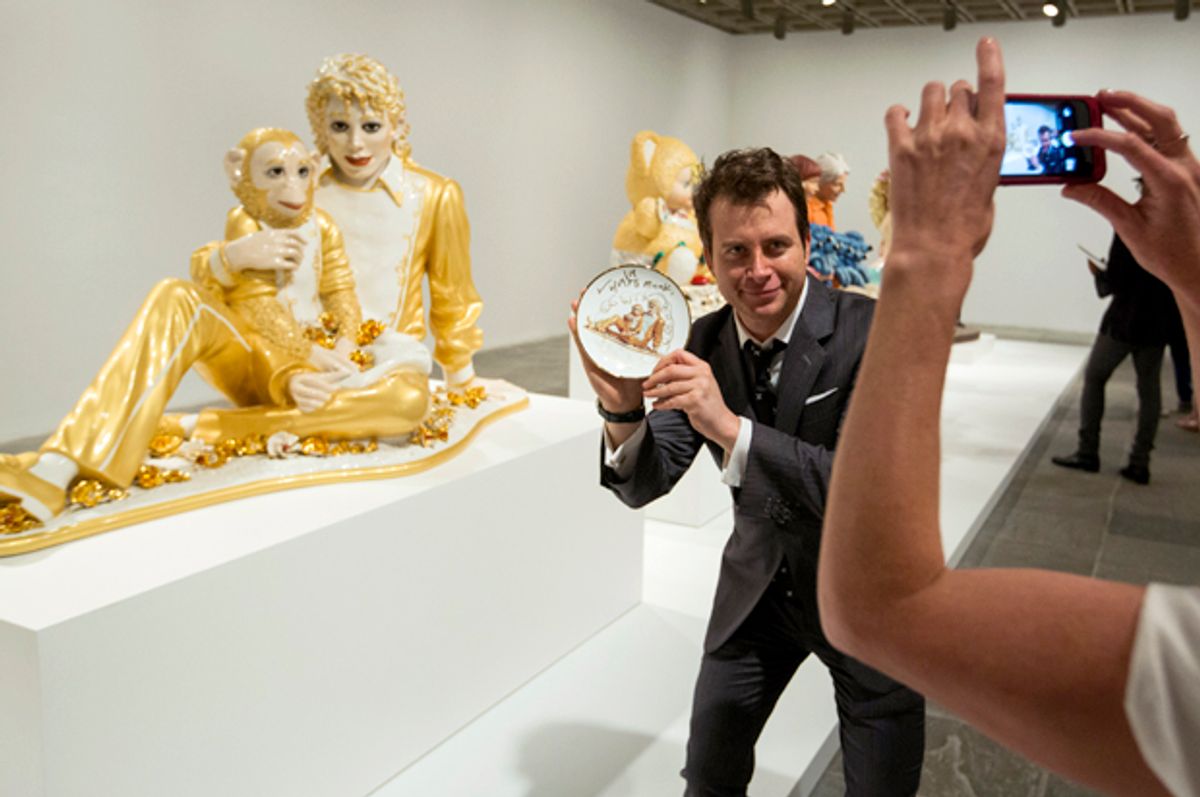 A man holds a signed plate with the likeness of the sculpture Michael Jackson and Bubbles in front of the actual sculpture at the Jeff Koons retrospective at the Whitney Museum of American Art in New York June 24, 2014. (Reuters/Lucas Jackson)
--

Certain things are catnip for New York’s legion of Instagrammers: a hot new restaurant, art “happenings” like this spring’s Kara Walker sugar sphinx, the semiannual Manhattanage. These are the subjects that jam feeds over the course of a few hours or a few weeks as everyone you follow posts the same exact photo of the same exact thing, same crop, different filter. Those obligatory check-ins prove that they have, in fact, been there, seen that. I ’gram therefore I am.

And so, this summer, get ready to see a lot of Jeff Koons selfies.

The exhibition, which opened June 27, is full of the kind of giant, shiny objects that made Koons famous: inflatable bunny rabbits fashioned in polished stainless steel, pristine balloon animals, and other objects chosen precisely for their banality. And selfiests are going to eat it up. Because if there’s anything that the selfie-taker loves more than a mirror, it’s a culturally significant mirror.

There’s an often repeated (though dubious) anecdote about how one culture or another believes that taking someone’s photo takes a piece of their soul. Today, it seems, taking a cellphone picture is our way of taking a piece of something for ourselves, claiming ownership. There’s even something predatory about the way we do it: Watch at any concert how hungrily people reach with their camera phones to get their shot of the star.

The art-world embodiment of this concept was crystallized, fittingly, by techno-culture magazine Dis, when critic and curator Brian Droitcour coined the hashtag #artselfie in 2012. “The selfie genre that has proliferated on Instagram’s phone-specific platform reveals the social network as a telephone/mirror hybrid — literally! — and continues the aestheticization of everyday life in social media that has leeched the authority of image-making from mass media and from art,” Droitcour writes of the phenomenon. “When the mirror is art, the image serves as a reminder of this process, and an acceleration of it.”

As of writing this, some 50 #koons-tagged selfies had been posted from the Whitney to Instagram, and the exhibition hadn’t even opened to the public yet. The most common shot? The giant circle of a Mylar balloon titled Moon (Light Pink), which perfectly fills the app’s square aperture, and allows the viewer to take a flattering shot, while reflecting some of the major works behind it. (To which the author pleads guilty.)

Other popular spots include a hall of colorful animal-shaped mirrors from the Easy Fun series, where reporters subtly waited turns to get their shot at the press preview, and the gallery featuring some of Koons’ earliest works, in which inflatable toys are propped up against mirrors on the walls and along the ground — all the better for a surreptitious, sneak-attack selfie. Then there’s the Balloon Venus, whose voluminous curves distort and replicate the body’s reflection.

For the misanthrope or selfie-shy, there is also a sense of schadenfreude to be found secretly capturing other people’s selfies in progress. There are even the artist’s own proto-selfies to look at, sexed-up self-portraits like the giant billboard from Made in Heaven that greets guests on one floor of the exhibition. On the museum’s first floor, some of Koons’ most recent works, from his Gazing Ball series — which places reflective suburban lawn rearmaments in the arms of ersatz classical sculptures — practically invite self-reflection from the title alone. It's a perfect storm of social media: cultural cachet and reflective surfaces.

Jeff Koons has made a career out of appropriation, of taking the everyday and claiming it for art. And now his audience is turning that relationship inside out. By creating a cultural event certain to be used as a tool of personal image making for many who attend it, Koons has unintentionally surpassed the promise of his Banality series in ways he could have never imagined -- but surely would have loved.