SCOTUS gives women the middle finger: Why this month was so frustrating

From buffer zones to Hobby Lobby, this is what it means to live in America in the 21st century 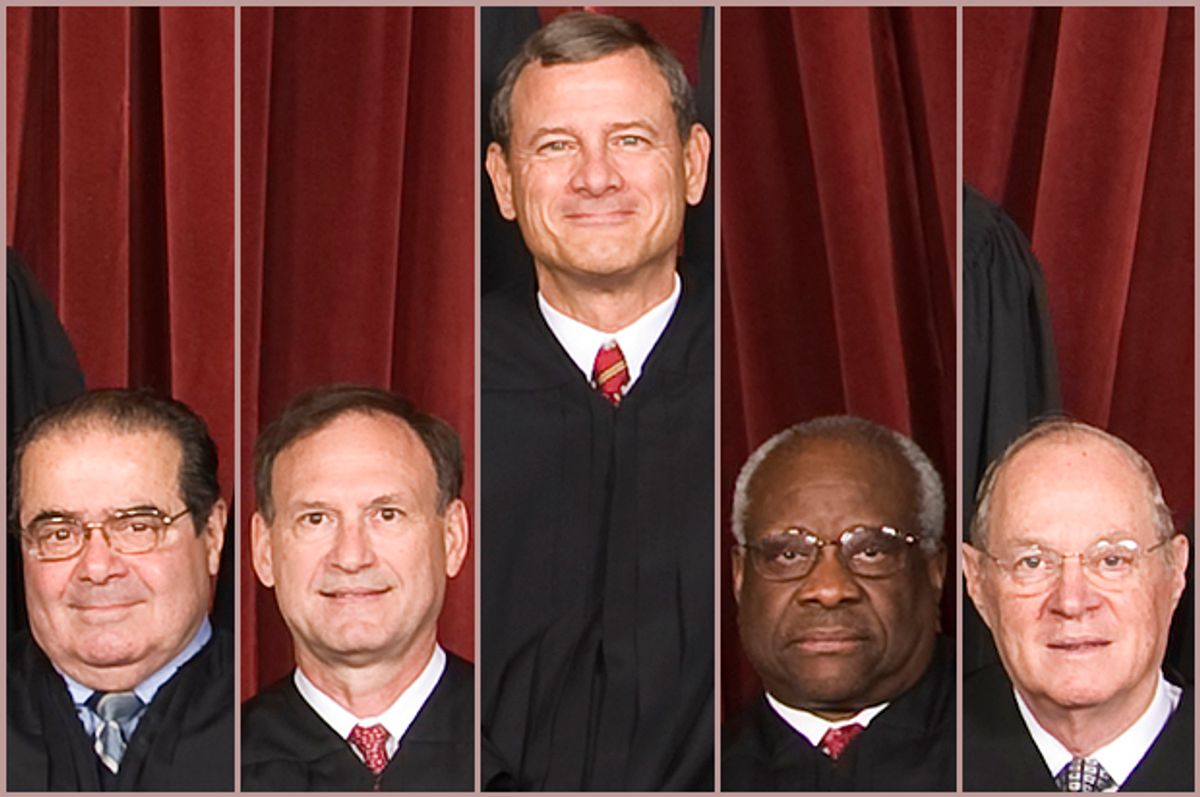 This has been a frustrating month. After a lot of anxious waiting, we now have two Supreme Court decisions that more or less amount to the justices (or most of the justices) giving the middle finger to women. On Thursday, the high court ruled unanimously that Massachusetts' buffer zone law was an unconstitutional violation of the First Amendment rights of protesters stationed outside of clinics across the state. The ruling itself was demoralizing (and dangerous) enough, but the language of the majority opinion -- penned by Chief Justice John Roberts -- also seemed to accept the terms set by the plaintiff without question. According to Roberts' opinion, the protesters "counsel patients" and have "quiet conversations" with women entering and exiting the clinics. The 35-foot buffer zone hurt the "counselors" in their ability to persuade women, who in this telling are a willing audience to the people calling them murderers. Given Roberts' characterization of these interactions, a person could wonder why the state enacted the law in the first place. (That is, until you remember that an antiabortion activist murdered two people in a clinic just outside of Boston.)

The Monday opinion in Hobby Lobby was equally disastrous, and issued a major blow to reproductive rights and worker rights. (Not to mention opened the door to all kinds of discrimination that can now be done in the name of "sincerely held" religious beliefs -- which corporations can now have.) But at least this time we had a blistering dissent from Justice Ruth Bader Ginsburg, who argued in no uncertain terms that the five justices in the majority just set the stage to allow corporations to disregard federal law and discriminate against employees, as long as the claims are argued as being a matter of faith.

After reading both opinions, I found myself wondering at what point women's lives will matter more than abstractions. Ginsburg, in her dissent in the Hobby Lobby case, argued that the benefit of the contraception requirement -- to women's lives and public health -- is "concrete, specific, and demonstrated by a wealth of empirical evidence.” Justice Samuel Alito, writing for the majority, argued that challenging Hobby Lobby's pseudoscientific claims about contraception "in effect tells the plaintiffs that their beliefs are flawed." The Massachusetts law had a similarly positive -- and quantifiable -- effect: a decrease in clinic harassment and violence. Real lives. Actually made better. But as Roberts observed in the opinion on that ruling, the protesters didn't feel that they were able to be persuasive from 35 feet away. That was apparently more important.

So when do we get to say that women's lives are important? When do we finally get lawmakers and justices who recognize that women's lives are important? When will a woman's right to walk into a medical center without being swarmed by people who don't believe she knows enough about the decision she's making -- who call her a murderer or patronizingly "counsel" her about the choice she has already thought through and decided on -- win out? The most troubling assumption in the McCullen ruling is not that anti-choice protesters have a right to speak -- no one contests that they have this right -- but that they have the right to an audience that can't escape them.

That isn't free speech, that's being held captive. And it's being held captive in a culture that already parrots the messages of these protesters -- in media and in our laws. The women who are crossing that threshold and exercising their constitutional right to an abortion already know everything the protesters want to tell them. They've heard it from their lawmakers. Been taught through movies and television that they are making what our culture considers a shameful choice. In plenty of states, doctors are required to parrot the misinformation and stigmatizing rhetoric the protestors are shouting outside. There is no threat of the protesters' message being lost -- but there is a threat that real harm will come to the women for whom those messages are intended.

But the court sided with the protestors. Forget women's actual physical safety, the right to yell in someone's face -- as opposed to yelling at them from across the street -- mattered more.

On Monday, the high court ruled that bosses' feelings matter more than women's lives and livelihoods. In his effort to calm concerns about widespread discrimination, Alito assured that "this decision concerns only the contraceptive mandate and should not be understood to hold that all insurance-coverage mandates ... must necessarily fall if they conflict with an employer's religious beliefs." As if the fact that the court had only affirmed a company's right to deny women comprehensive health coverage is some kind of relief. Alito may as well have written, "Don't worry, guys, it's only women who are being discriminated against here."

And as Irin Carmon noted at MSNBC, the justices -- beyond sanctioning widespread gender discrimination -- just opened a door to all kinds of legal evasions and other bullshittery from corporations. They now just need the right plaintiff to walk through it.

So here is where we are in 2014. Women in Texas are self-aborting at a rate that should be unheard of in a world after Roe v. Wade. Schools across the country won't teach young women about contraception, and when they graduate into the workforce, these women stand a decent chance of working at a company that won't pay for it. The party that is currently considering a lawsuit against the president of the United States has stonewalled equal pay legislation that would help close the gender wage gap because they believe it is "fuel" for lawsuits. A deeply conservative and majority male court that has lifetime appointments just affirmed once again that corporations are people but women are not.

A friend asked me this morning if I thought that things were less misogynistic than they were 40 or 50 years ago. My response at the time was that misogyny looked different now. But in the wake of these rulings and the mounting political assault on women in this country, I'm reminded that much of the misogyny we see today looks exactly, dangerously the same.