Tea Party's secret advantage: Why the far right is stronger than everyone thinks

The Tea Party is a mind-set, not a literal movement. Here's how it's quietly bending the establishment to its will 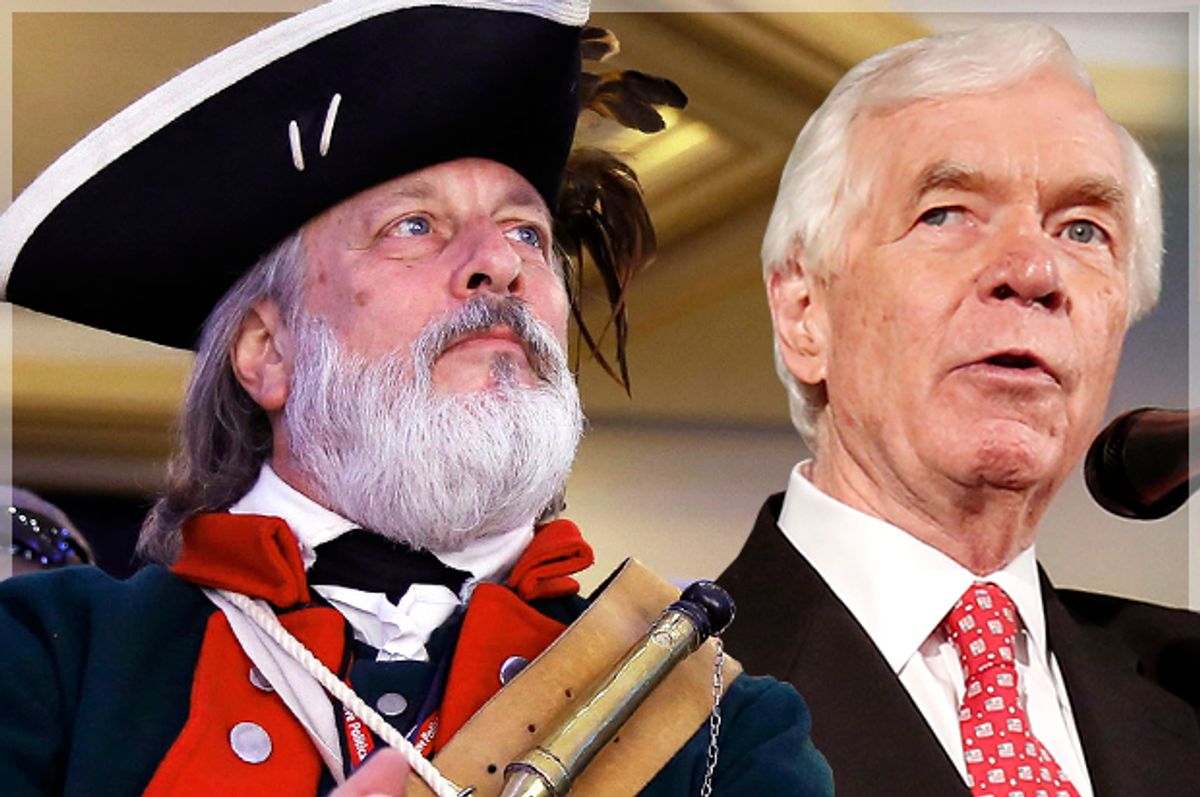 It’s become a running joke this spring: A major Republican primary takes place and the media struggles to fit the results into a neat, tidy narrative about the war between the Tea Party and the GOP establishment – with comically erratic results.

So when the establishment’s choice, state House Speaker Thom Tillis, fought off a Rand Paul-backed candidate to win the Republican Senate nod in North Carolina back in early May, the headlines touted the waning clout of the Tea Party.

But then Thad Cochran finished behind Chris McDaniel in the preliminary round of voting in Mississippi and Eric Cantor fell in one of the biggest political upsets of all-time and the narrative shifted: Forget what we said a few days ago – the Tea Party is stronger than ever! Except it turned out the familiar national Tea Party groups had nothing to do with the Cantor race, and now Cochran has gone and turned the tables on the Tea Party, winning the runoff over McDaniel.

So now we’re back to talking about the resurgent establishment and the fading Tea Party. Of course, Tennessee and Kansas are still on the board, so this is all subject to further, sudden revision.

But while it’s easy to mock the headlines and some of the punditry that have accompanied all of this, this spring's results really aren’t inconsistent with each other at all. There actually is a narrative that unites all of these seemingly contradictory results – a narrative about the power of the Tea Party and its grip on today’s Republican Party.

The key here is to understand the Tea Party as a mind-set, and not a literal movement. When it first began making noise five years ago, many on the left wanted to dismiss the Tea Party as a cynical exercise in astro-turfing, with moneyed right-wing interests bankrolling sham organizations that created the illusion of a grass roots-fueled movement. But the Tea Party, properly understood, is a term that describes the heart of the modern Republican base – people with similar cultural anxieties and economic grievances and the same deep distrust of Washington and hostility toward entrenched power.

And since 2009 their political energy has been directed both at fighting President Obama and at waging a purity campaign within the Republican Party. That intra-party aspect stems from the Tea Party’s understanding of how what to them is the most traumatic political development in the recent past – Obama’s election in 2008 – came about. For this, they blame George W. Bush and the Republicans who stood with him last decade as he enacted his “compassionate conservative” agenda. To the Tea Party, a direct line can be drawn from Bush’s fiscal profligacy and expansion of government (new prescription drug entitlement, expanded federal role in education, a brand-new Cabinet-level department) to the collapse of the economy and the rise of an anti-Republican mood that lifted Obama to victory in ’08 and handed him massive congressional majorities.

This reading of history is absolutely critical to understanding the Tea Party mind-set. It is driven by a belief that Bush and the GOP establishment betrayed conservative principles and gave Americans the wrong idea of what conservatism is – and that Americans therefore ended up falling prey to the false promises of Obama and the left. By this logic, only by ridding the GOP of establishment-types can the Tea Party restore the good name of conservatism, win back power and prevent another Obama nightmare from ever happening again.

These are the two fronts of the Tea Party’s war – an all-out effort to thwart Obama and his agenda and also to cleanse the GOP of leaders who might in a moment of weakness or expedience give in and compromise with Obama. And in the two elections that have so far played out in the Tea Party-era, in 2010 and 2012, the Tea Party mind-set has asserted itself in ways that have successfully bent the establishment to its will.

It’s true that the overwhelming majority of Republican incumbents were reelected in both years, but high-profile Tea Party uprisings toppled several establishment luminaries: Utah’s Bob Bennett (denied renomination at a 2010 state convention), Delaware’s Mike Castle, South Carolina’s Bob Inglis, Alaska’s Lisa Murkowski (who erased her ’10 GOP primary loss with a successful fall write-in campaign), and Indiana’s Richard Lugar. The Tea Party mind-set also propelled a number of candidates who just a few years earlier would have been dismissed as hopeless gadflies to GOP nominations for major office. In some cases, this spoiled the GOP’s general election chances (think: Christine O’Donnell in Delaware or Sharron Angle in Nevada), but in more Republican-friendly jurisdictions many of those nominees went on to win office (think: Rand Paul). These notch marks have been more than enough to alter the public behavior of establishment-type Republican office-holders; if crossing the Tea Party is going to put them in even theoretical danger of becoming the next primary season victim, then why do it?

So that’s been the backdrop for the 2014 primary season. All of the stories about the battle between the GOP establishment and the Tea Party boil down to this: Can the establishment, with its more pragmatic governing instincts, buy itself more room to maneuver in Washington? Can it erase the psychological trauma – the terror of ending up the next Bob Inglis – that, for instance, left even pragmatic-minded Republican lawmakers feeling they had no choice but to go along with the Tea Party and shut the government down last year? Can it upend the incentive system that informs the policy positions and bargaining postures of every Republican in Washington? And, while it’s at it, can the establishment succeed in thwarting any more O’Donnell/Todd Akin-types from securing GOP nominations in marquee races?

On that last question, the establishment has largely gotten its way this spring, with establishment-backed candidates like Tillis and Cochran holding off Tea Party insurgents in the biggest battles. Where the Tea Party has drawn blood – taking out Cantor in Virginia and 91-year-old Rep. Ralph Hall in Texas – it’s not likely to matter in November, since it happened in deeply red districts.

But the establishment’s victories come with asterisks. Take Tillis. As the speaker of the North Carolina House of Representatives, he embodies the establishment insider. His credentials are impeccable and he’s a polished public performer not prone to the erraticism that wrecked Akin and O’Donnell – the kind of generic, “safe” candidate who, in theory, should be able to ride the Obama fatigue of 2014 to victory over Democratic Sen. Kay Hagan. But to hold off his Rand Paul”-backed primary opponent, Tillis adopted a series of positions – on climate change and “personhood,” for example – that have given Hagan serious general election ammunition. Additionally, as the state House speaker, Tillis’ fingerprints are all over the Tea Party-friendly agenda that Republicans have swiftly imposed on North Carolina over the last 18 months, an agenda that has left the state’s GOP governor with rotten poll numbers.

In the Republican universe, Tillis is considered a quintessential establishment figure, but he’s running on a Tea Party agenda. This is a mark of the strength of the Tea Party; their candidate didn’t win the GOP primary in North Carolina, but their ideology did.

There are, to be fair, establishment Republicans who have refused to cater to the right the way Tillis has. A prime example is Richard Hanna, who represents an upstate New York district in the House. Hanna is virtually alone among congressional Republicans in supporting gay marriage, a position he announced last year, and he’s also broken with his GOP colleagues on several key votes.

In last Tuesday’s primary, he beat back a conservative challenger, but again there’s an asterisk: Even though Hanna and his allies outspent his opponent by a margin of about 14-to-1, he barely won the race, surviving by just 6 points. This is hardly the kind of result that will loosen the Tea Party’s psychological grip on Capitol Hill Republicans. To them, the lesson probably isn’t that Hanna survived; it’s that even with all of his advantages, he very nearly lost. It’s hardly an outcome that screams, “You can do it too!”

And it’s the same story in Mississippi, where the establishment “won” last Tuesday thanks to their crafty enlistment of traditionally Democratic black voters. But most other states don’t have the same open primary rules as Mississippi, so it’s not like Cochran has created a model that can be replicated by an incumbent facing a Tea Party threat. Nor, for that matter, do any other states have as deep a pool of black voters and as fraught a racial history as Mississippi. What Cochran pulled off really is an only-in-Mississippi achievement.

Moreover, the way that Cochran and his allies won has enraged the Tea Party right, which has filled the air with heated cries of betrayal and vows of retaliation. Essentially overnight, Cochran’s win has taken on enormous symbolic meaning to the Tea Party. It’s the ultimate confirmation of everything they’ve suspected about who the establishment is and what the establishment will do to stop them – proof that they need to redouble their effort to purge the party of what Ted Cruz has memorably called the “squishes.”

For the Republican establishment, that’s the biggest problem to emerge from this past week, and from the primary season so far – that Cochran/McDaniel will become a rallying cry for the Tea Party for years to come, a traumatic memory that energizes the right to push even harder.

In that sense, it’s not hard to think back to 1952, when another fight between the establishment and the hard right played out at the Republican convention in Chicago. Conservatives showed up there believing they had the votes to nominate Ohio Sen. Robert Taft for president. But that prospect panicked the party’s Wall Street-allied Eastern establishment, which was backing Dwight Eisenhower. So the establishment forces schemed to alter the math with a ploy called the “Fair Play” rule, which shifted power from the pro-Taft convention floor to the pro-Eisenhower Credentials Committee. The Credentials Committee then denied seating to pro-Taft delegations that were under challenge, thereby handing control of the convention to Eisenhower.

As cunning schemes go, it was a master stroke, and Eisenhower went on to win in the fall with ease. But to the right, it was theft, a nomination they had earned for their candidate stolen by powerful forces that had controlled and corrupted the party for too long. They didn’t forget and instead used the memory of Taft’s defeat as a mobilizing tool. Steadily over the next decade, they built their numbers, improved their organization and waited for their moment. And finally it came in 1964, when the establishment dawdled to find a presidential candidate while the right locked up one state delegation after another for Barry Goldwater. It took 12 years, but the right avenged its 1952 humiliation.