Louisiana, Missouri and others are shamelessly pushing a creationist agenda to appease the Christian right 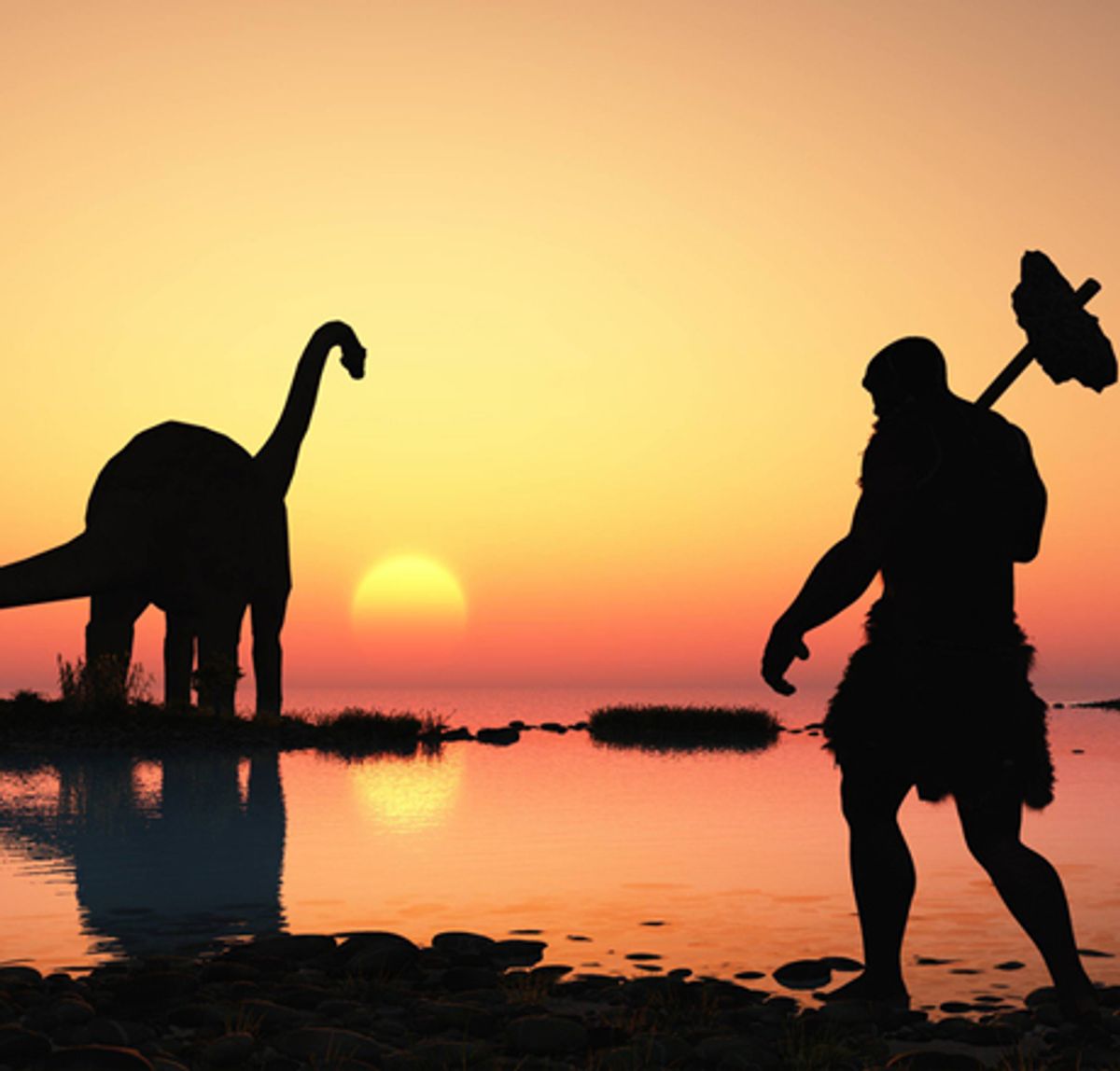 The British government dealt a strong blow to creationists last week when they clarified and extended their laws banning creationism in the classroom to not only free schools, but to academies as well.

Academies, including free schools, are the UK’s version of the charter schools in the US, and there were concerns that, since academies are often run by religious organizations who taught and endorsed creationism in the classroom, kids who attend them were not being taught actual science.

The scientific community put heavy pressure on the British government to extend a similar law passed in 2012, which did not apply to free schools nor all academies and allowed some older schools already teaching creationism to grandfather their questionable curriculum in.

With this new ruling, "[…] The Government has extended such an explicit rule to all new Academies and Free Schools and made it clear that it believes that existing rules mean that no Academy or Free School can teach pseudoscience," said Pavan Dhaliwal, The British Humanist Association’s Head of Public Affairs explained in the press release.

In the US however, the battle to bring creationism and intelligent design into the classroom is alive and well. Ever since the 1925 Scopes Monkey Trial in which the teaching of evolution was found to be a violation of Tennessee law, banning the teaching of human evolution in any publicly funded school.

The battle finally came to a head in 1987 when the Supreme Court heard Edwards v. Aguillard, in which Don Aguilard took the state of Louisiana to court over a law that required that creationism be taught in public schools.

The case, which made it all the way to the Supreme Court dealt a massive blow to the religious right when the court ruled that teaching creationism in publicly funded schools was unconstitutional because the original law was specifically intended to promote a particular religion.

A similar blow was dealt decades later when in 2005 when a US District Court ruled that intelligent design was not scientific and even encompassed creationism and teaching either to be unconstitutional.

So one would think that since both creation myths that are endorsed by the religious right have been struck down in the highest courts in the country that this debate would be settled. How one earth could we still be fighting the creationist proponents when they have been dealt solid deathblows?

According to the National Center for Science Education (NCSE), an organization that tracks anti-science bills around the US that deal with evolution and global warming, almost every southern and bible-belt state in the US has at the very least attempted to pass education bills that either remove evolution from the curriculum or make it legal for teachers to offer alternative theories to human origins.

The states fighting to pass these laws are predictable if you pay attention to any national politics, the more red a state votes, the more it fights to remove science education from its schools or at the very least, replace science classes with a form of Bible study.

So what states and bills have been the worst to science education? Here are five examples of states either enacted or relentlessly fighting to pass anti-evolution and or anti-science bills to change their educational standards to appease the Christian Right.

Louisiana seems to be trying harder than any other state to produce the most scientifically illiterate students it possibly can. Governor Bobby Jindal has overseen most of these bills and has endorsed them all.

Jindal even pushed and won to get a voucher program installed in the state that would allow public funding to be used for private education, including religious schools that taught creationism.

A 2008 proposal that was approved in the state allows teachers to, “[…] Supplemental textbooks and other instructional materials to help students understand, analyze, critique, and review scientific theories in an objective manner,” according the language drafted in the law.

The law clearly had evolution and climate science in its sights when allowing teachers to use other sources of information to critique scientific theories.

A repeal effort has been made under Senate Bill 175, in April 2014 it went in front of the Louisiana Senate Education Committee and the repeal was voted down 3-1, meaning that teachers could still skirt the federal law and use their own materials in the classroom against well understood scientific theories.

The failure to get SB 175 passed has continued to ensure those with religious power in the state control science education.

Missouri recently advanced a bill, House Bill 1472, to its House that would allow parents to opt their children out of class during lessons about evolution.

According to NCSE the bill's sponsor Rick Brattin (R-District 55) told the Kansas City Star (February 6, 2014) that requiring students to study evolution is "an absolute infringement on people's rights" and that evolution is "just as much faith and, you know, just as much pulled out of the air as, say, any religion."

Bills being written by politicians who know less about the scientific theory of evolution as the students they believe they are protecting, cannot be a good thing. States like Missouri are turning to politicians and not scientists when drafting this type of legislation.

Missouri even looks to take this one step further and has another bill, House Bill 1587, that is currently with the House Committee on Elementary and Secondary Education that would remove the ability of school administrators to prevent teachers from miseducating students about "scientific controversies" around evolution. No date has been set for the committee to discuss this proposed legislation.

South Carolina republicans want to “teach the controversy.” This creationist gem, a much laughed at and discarded argument was brought back into the limelight when Senator Mike Fair (R-District 6), a member of the states Education Oversight Committee (EOC) and long time opponent of evolution told the Charleston Post and Courier that, We must teach the controversy ... There's another side. I'm not afraid of the controversy."

The proposal passed the EOC with a 7-4 vote and went to the states board of education, which held a meeting on June 11, 2014. A number of scientists came to oppose the proposal and the only advocates who came to speak in the proposals defense were two speakers affiliated with the Discovery Institute, an anti-evolution organization that supports intelligent design as an explanation for life.

Thankfully the state board of education saw through the religious fog and rejected the proposal.

Oklahoma faced not one, but two anti-evolution bills this year. The first brought forth in February, Senate Bill 1765, would have made it impossible for school administrators to mislead students about “scientific controversies”. The first bill died in the hands of the Senate Education Committee.

Shortly after, a second and similar bill, House Bill 1674, was proposed and even passed the House of Representatives by a vote of 70-6, sending the bill to the states senate. This new bill specifically mentioned "biological evolution, the chemical origins of life, global warming, and human cloning" as subjects which "some teachers may be unsure" about how to teach, according to NCSE.

HB 1674 however never made it to vote in the senate and expired. One can only assume a third attempt will not be far off.

Another bill put forward to tie the hands of school administrators is House Bill 207. Like the bills in Oklahoma and Missouri HB 207 would allow teachers to challenge scientific theories and offer other alternatives and not face any punishment for violating educational laws that prohibit religious alternatives.

The bills only sponsor, Richard P. Bell (R-District 20), acknowledged to the Washington Post (January 29, 2014) that HB 207 would apply to such scientific theories such as evolution and climate change. Bell also admitted to another local paper The Recorder that he himself was a creationist.

The Recorder later publicly came out against the bill and said they believed it was a threat to the states scientific educational standards.

The bill however died when the House Educational Committee did not vote on the issue before the bill expired.

These five states are some of the top examples but they are not the only five, and in the US were evolution is not widely accepted this hurts the countries scientific future.

The biggest threat to the US education is the Republican Party’s refusal to accept scientific evidence as fact and turn every scientific claim into some form of liberal conspiracy.

While 42% is an improvement over two years ago it still shows just how far behind the US is to the rest of the developed world. Iceland, Denmark, Sweden and France all poll in over 80% acceptance of the theory. In fact, when a poll was conducted of European countries that included Turkey, the US fell behind every country except Turkey that happened to poll at 25% acceptance.

Both Bill Nye and Neil deGrasse Tyson have spoken out about the dangers of not teaching evolution, seeing as how evolution is one of the foundations of science, especially life science.

Nye’s video criticizing creationism and scolding those who refuse to teach their children about evolution lead to a nationally publicized debate between himself and Ken Ham of the creationist organization Answers in Genesis.

So while federal laws make it clear that the teaching of creationism and intelligent design are unconstitutional and are clear religious endorsements, it is obvious that the struggle to teach actual science across the US is an ongoing battle.

National science standards such as the Next Generation Science Standards need to be adopted across all fifty states and put an end to GOP controlled states creating their own religious based science curriculums.