The usual elements of her characters are there: The pratfalls, the raunch. But this time, she's a real person 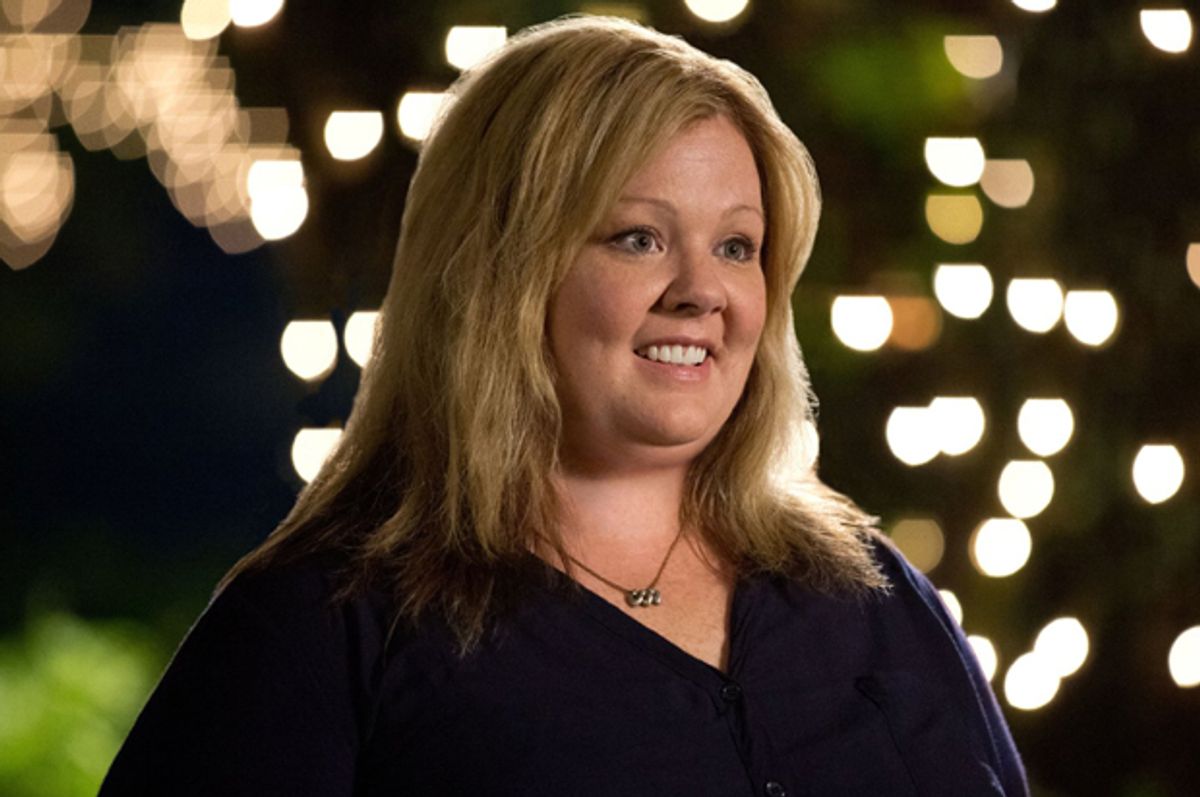 As moviegoing traditions go, there are few I welcome more than the Summer McCarthy Movie. Ever since her breakthrough role in 2011’s “Bridesmaids,” Melissa McCarthy has been on a streak of vulgar, enjoyable, thoroughly female-driven summer comedies. Last summer, we got “The Heat,” a buddy-cop movie in which McCarthy played the rogue cop to a by-the-book Sandra Bullock. This year, we get “Tammy,” a road-trip comedy in which McCarthy’s character tries to repair her relationship with her alcoholic grandmother, played by Susan Sarandon.

Few of these movies are cinematic triumphs — a year later, I can’t recall any details of “The Heat’s" plot, even though I recall loving it while I was in the theater — but they are always a welcome alternative to the testosterone-driven CGI-fests that usually clog up theaters after Memorial Day. “Tammy,” for example, is up against “Transformers 5.” You don’t need a triumph of filmmaking to compete with “Transformers 5”; you just need a premise slightly more compelling than “this time, the robots talk to Mark Wahlberg.” And “Tammy” — which McCarthy co-wrote, co-produced and considered co-directing, all with her husband, Ben Falcone — is enjoyable for another reason, too: It presents viewers with a rare opportunity to see what a Melissa McCarthy movie looks like, when Melissa McCarthy is in charge.

McCarthy has been a revolutionary presence in big-screen comedy. Before “Bridesmaids,” gross-out comedy was almost entirely male-dominated, with women camped out at the edges of the story, playing uptight wives and reasonable-yet-befuddled girlfriends. There were certainly plenty of women who could carry a comedy — Anna Faris, Tina Fey — but even they were typically groomed into traditional Hollywood glamour and “likability.” Fey, famously, was required to lose weight and get a make-over before she could host Weekend Update on “SNL”; Faris is one of the most fearless physical comedians working today, yet she trudged through a thousand shticky, insulting “dumb blonde” roles in search of mainstream recognition. Before we permitted women to be funny, we first made them prove that they could act like girls.

But Melissa McCarthy always seemed dazzlingly free from those expectations. Think about the typical McCarthy character: blunt, disheveled, aggressive, dirty-minded and dirty-mouthed. These women rarely, if ever, exhibit an interest in anything like “glamour”; in “The Heat,” McCarthy stomped around in cut-up T-shirts, canvas vests and messy hair, looking like she belonged in the parking lot at a Motorhead concert. In “Bridesmaids,” she dressed like she was perpetually on her way to a golf course. McCarthy also imbues her characters with a physicality that is the opposite of delicate — in “Tammy,” she responds to getting fired from a fast-food chain by licking the freshly made hamburgers and throwing ketchup packets at her boss’s head — and a magnificently don’t-give-a-fuck deadpan delivery. The laughs come, not from how obscene her lines are, but from how unfazed she is by their obscenity: She can offer to shove a man’s balls “right back up his scrotum” as if she were complimenting him on his tie.

McCarthy never let the need to seem “feminine,” or “likable,” or even remotely appropriate, get in the way of a good joke. Which, I would argue, is exactly why she’s been so popular with female moviegoers: For women, who are trained to spend every moment of their lives worrying about how other people see them, McCarthy’s on-screen persona is an untamed, foul-mouthed, ketchup-hurling Id, a woman who acts on every impulse that pops into her head, without a second’s guilt or self-doubt.

And yet there has also been some cause for concern about how she’s deployed in her roles. McCarthy’s weight has drawn a ridiculous and frankly sexist amount of focus from the press. Needless to say, male comedians have never been required to look like traditional leading men: Louis C.K. and Seth Rogen and Will Ferrell are far from hideous, but they also don’t look like Brad Pitt, because they don’t have to. Their job is to tell jokes, not to show off their rock-hard abs. Yet McCarthy can’t make a movie without Rex Reed deeming her “tractor-sized” and calling her a “hippo.” It’s tempting to just avoid the subject entirely — her weight has nothing to do with her talent, after all — but it’s worth noting that McCarthy doesn’t just bear the burden of representing “women in comedy.” She is also, specifically, a fat woman in comedy, and that particular identity comes with a long and ugly history of being used as a human punch line.

Some feminist critics, including Michelle Dean and Melissa McEwan, worry that certain of McCarthy’s characters reinforce ugly stereotypes about fat women: When she flashed her “undercarriage” to an eligible gentleman in “Bridesmaids,” were we supposed to laugh simply because it was vulgar, or were we also supposed to be grossed out by the idea of McCarthy having sex? Are her characters messy or “butch” because McCarthy enjoys playing up that angle, or is it meant to signify that women her size are slobs? And why is it that her characters constantly mention their sex lives and yet, as McEwan noted, actual sex scenes do not show her body? (Or, in “Bridesmaids,” showed McCarthy’s body — but also showed her using a sandwich as a sex toy?)

With “Tammy,” Melissa McCarthy has an exceptional amount of creative control. She’s also the lead player, in a way her other projects haven’t allowed for: In “Bridesmaids” she stole scenes, and in “The Heat” and “The Identity Thief,” she was half of a double act, but this time around, she plays the title character, and is undeniably the star of the show. This is as good a time as any to get a sense of how Melissa McCarthy actually wants to be portrayed in a film.

The answer is that — in “Tammy,” anyway — she looks a lot like a Melissa McCarthy character. “Tammy” is messy, awkward, and intensely un-stylish: One particularly awful T-shirt, featuring a cartoon bear, becomes a major plot point. She does, as previously noted, throw ketchup when enraged. She’s more than willing to throw herself into humiliating physical comedy: She’s a bad but frighteningly enthusiastic dancer, she does pratfalls, she wipes out on a Jet-Ski. All the expected elements are there.

But, in this role, McCarthy’s also given the chance to show new levels of vulnerability. She gets a typical McCarthy bit about her over-inflated sexual confidence, declaring that guys are drawn to her “like flies on shit,” but we also get to see her feeling genuinely sad when those guys reject her. The joke isn’t that a woman who looks like Melissa McCarthy expects to get laid, it’s that this particular McCarthy character is going through a rough divorce, and she’s having trouble adjusting to the world of dating.

Nor is her sexual desire always a joke: She gets a real, and very sweet, romantic plotline with the always-charming Mark Duplass. I’ve always enjoyed McCarthy’s purely raunchy routines, her characters’ tendency to chew men up and spit them out — again, it’s an Id thing — but here, we’re asked not just to accept that her character enjoys sex, but to understand that she’s worthy of love. In fact, “Tammy” is remarkably open about the sexual desires of women who are normally disregarded: Kathy Bates, herself no stranger to being shamed for her body type, appears as a wealthy lesbian relative who cares for Tammy in a time of crisis, and Sarandon, as McCarthy’s grandmother, is granted an active  sex life.

As for her weight, well: Aside from how refreshing it is to see Duplass describe Tammy as “very pretty,” McCarthy’s weight is acknowledged, but never allowed to dominate our understanding of her character. There are certainly jokes about Tammy liking food. (One of the bigger laughs comes when she’s asked if she made out with the neighborhood ice cream man for free product. McCarthy pauses, grimaces and replies, “Well, not at first.”) But there are few people who could turn down free ice cream, and Tammy’s weight is never presented as a reason to look down on her. When someone calls her a “fat loser,” later in the film, she hurts, and we hurt with her.

“Tammy” is far from perfect: It’s messy, episodic, uneven. Some jokes are too dragged-out; others don’t quite land. In the attempt to establish McCarthy as an actress who can do drama and vulnerability, there are perhaps a few too many scenes where Tammy cries. But Melissa McCarthy films are rarely perfect, because they don’t have to be: They’re an excuse to spend a few hours in the company of Melissa McCarthy. And, in “Tammy,” we get to see a more human and lovable version of McCarthy than ever before.