From coverage of HIV medication to Title VII discrimination claims, here's what else the decision could affect 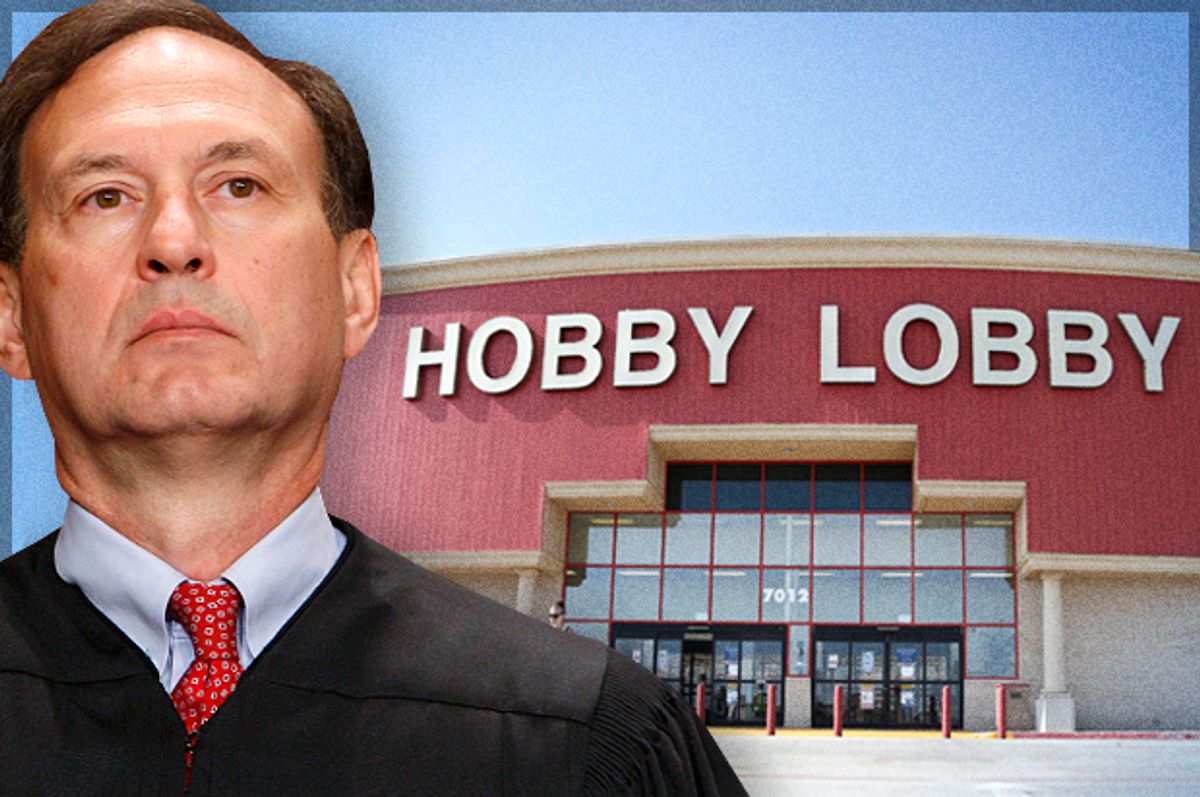 In striking down Obamacare’s contraception mandate, Justice Samuel Alito seemed to hope the decision wouldn't set off a feeding frenzy. Like a parent who lets their kid stay up past bedtime just this once, Alito tried to assure that the Court’s decision does not exempt employers from covering just any drug or medical procedure that conflicts with their religious beliefs—for instance, a blood transfusion or vaccines. He also dismissed Justice Ruth Bader Ginsburg’s suggestion that the majority ruling could be used to justify racial discrimination. “The principal dissent raises the possibility that discrimination in hiring, for example on the basis of race, might be cloaked as religious practice to escape legal sanction,” the associate justice wrote. “Our decision today provides no such shield.”

Despite Alito’s stated intentions, this week's ruling sparked more questions than it answered: Can an employer refuse to cover Viagra? What about HIV medication? If a boss can opt out of any law so long as she is motivated by a “sincerely held belief,” can they refuse to extend benefits to a same-sex spouse?

It will take years, if not decades, to know the full impact of the Court’s decision in Burwell v. Hobby Lobby—until a test case winds itself through the legal system, observers can only guess how lower courts, and ultimately the Supreme Court, will rule in any given scenario. But lawyers who specialize in constitutional law say certain outcomes are less likely than others given existing laws on the books.

The most immediate question raised by Hobby Lobby is whether the decision can be used to deny other medical treatments that conflict with an employer’s religious belief. Jenny Pizer, law and policy director at Lambda Legal, a gay-rights group, says that while Justice Alito dismissed the possibility the ruling could be used to deny coverage for vaccinations or blood transfusions, the Court provided no guidelines for determining which religious objections to medical treatments were valid and which are not. “We don’t have a principled framework that tells us why a business owners’ objection to a particular contraceptive should get this treatment and why it would be a different result if the objection was to sterilization,” Pizer says. This was precisely the point raised in Justice Ruth Bader Ginsburg’s dissent.

The answers to whether an employer can refuse to cover any particular treatment will need to be litigated on a case-by-case basis. But Pizer says the courts are unlikely to sanction decisions targeted at a minority group. “One likely answer is that an exclusion of coverage based on antipathy for a group should not succeed given what the court does here,” Pizer says. “If an employer were to say ‘We’ll provide insurance coverage for people who got HIV through X,’ I don’t see court accepting that distinction.” Treatments needed by trans people that are not routinely provided for other medical needs may be more vulnerable, Pizer says: An employer could claim their objection is to the treatment itself and not directed at trans individuals.

Another hypothetical that comes up frequently in discussions about gay rights and religious liberty is the “wedding vendor” scenario: A Christian florist or baker is asked to provide services for a gay wedding and refuses, running afoul of a local or state anti-discrimination law. This was precisely the set of circumstances in Elane Photography v. Willock, a case in New Mexico involving a photographer who declined to provide her services at a same-sex ceremony. A district court judge ruled last year that the wedding vendor violated the state’s Human Rights Act.

Lawyers representing a religious plaintiff in similar case in Oregon—this one involving a baker—praised yesterday’s decision and have pledged to cite the ruling in court filings. But legal scholars say the Supreme Court’s verdict is unlikely to help them. At issue in the Hobby Lobby case was whether the contraception mandate violated the Religious Freedom Restoration Act (RFRA), a statute passed in 1993 that bars the federal government from enacting laws that “substantially burden” religious individuals. Continuing its streak of granting businesses constitutional rights, the Court ruled that RFRA also applies to “closely held” corporations—those in which 50 percent of the shareholder value is owned by fewer than five people—like Hobby Lobby and that Obamacare’s contraception mandate infringed on their religious rights.

RFRA, however, does not apply to the 22 state and 140 local anti-discrimination laws protecting gays, lesbians, and transgender people. In 1997, the Supreme Court ruled that RFRA only applies to the federal government, making yesterday’s decision irrelevant in settling the various state cases across the country involving wedding vendors. State and local antidiscrimination protections would also preclude an employer from refusing to cover a same-sex spouse.

However, many states have passed their own versions of RFRA. “Now that the Supreme Court has decided this case, the question will become: How will state supreme courts interpret state RFRAs?” says William Eskridge, a law professor at Yale University who specializes in sexual minorities and the law. Eskridge says that while the Court’s finding in the Hobby Lobby case isn’t binding on state or municipal courts, they will nonetheless look to the ruling for guidance. In the case of Elaine Photography, the New Mexico Supreme Court determined that the state’s RFRA did not apply.

Protections for anti-LGBT people at the federal level are sketchier. Advocates for LGBT rights have been unsuccessful in passing the Employment Non-Discrimination Act, which would protect gays, lesbians, and transgender people from job discrimination at the federal level—it has been introduced in every session of Congress since 1994 but has yet to pass. However, the Obama administration’s Equal Employment Opportunity Commission has interpreted Title VII of the Civil Rights Act, which bans sex discrimination, to cover gays, lesbians, and transgender people. A federal judge in D.C. reached a similar conclusion in March, finding that discrimination against a gay employee constituted sex discrimination. This week’s decision in the Hobby Lobby case could cause trouble for plaintiffs using Title VII to bring a discrimination claim. “To extent that Title VII applies to sexual and gender minorities, Hobby Lobby creates a large loophole for religious employers,” Eskridge says.

The good news in all this may be that, as support for gay rights continues to rise, businesses will see discriminating against gays, lesbians, and transgender people as bad for business. “There will be a backlash against employers who want to exploit the Hobby Lobby exception to be anti-gay or anti-trans,” Eskridge says. “If you’re a Christian employer—religious of all sorts—do you really want to be in position of saying that Christ requires you to discriminate against HIV people?”