The religious right's No. 1 obsession: Policing women's sex lives by any means necessary 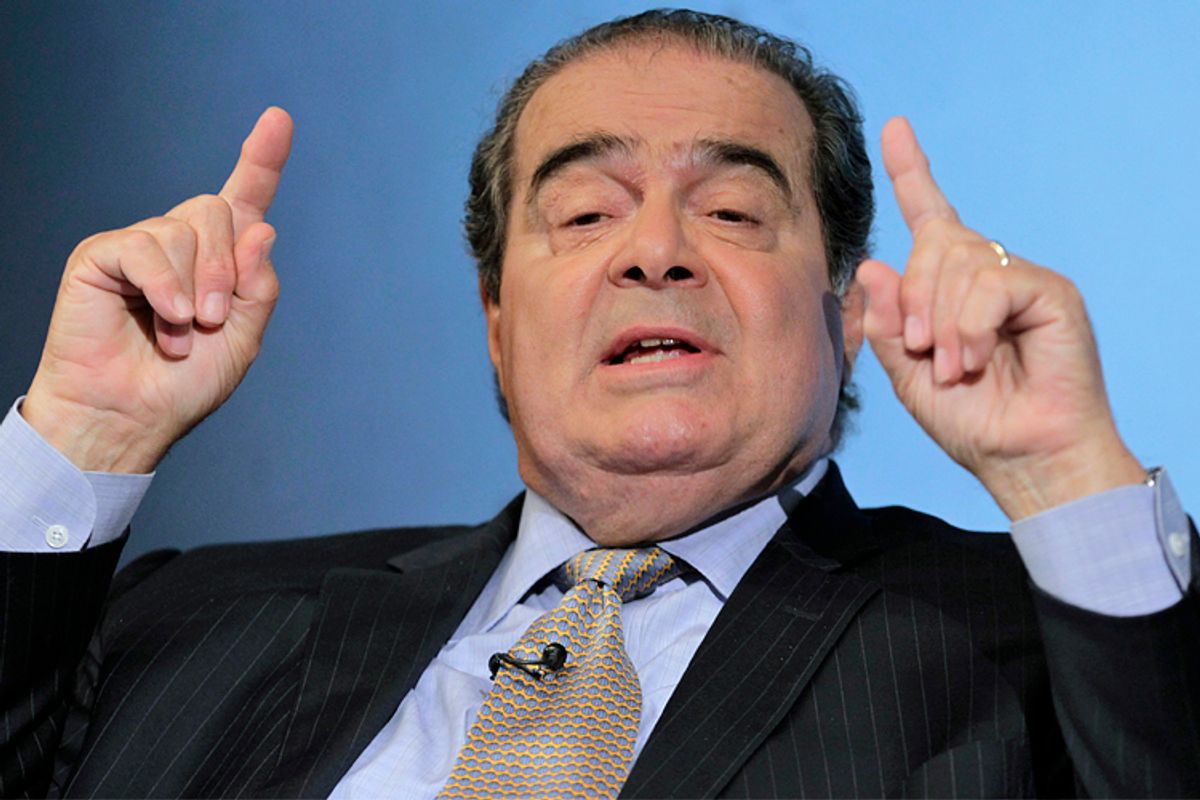 Monday’s Supreme Court decision in Burrell v Hobby Lobby was a blow against consumer protection, worker’s rights, and the religious liberty of employees who want their medical care to be free of what their boss thinks Jesus wants for their vagina. But it should be read as something else, as well: The end of the illusion that the anti-choice movement is about “life”, when in fact they are nothing more than a 21st century anti-sex league.

While anti-choice activists have long benefitted from claiming that they are motivated more by not wanting fetuses to die than any interest in controlling sexuality, the fact that the movement was out in force to support Hobby Lobby’s war on contraception coverage---even though contraception prevents abortion---shows that they are really more about punishing sex than saving fetuses.

Oh, sure, the Green family behind Hobby Lobby tried to preserve the illusion that conservative objections to modern health care methods that allow women to safely control their fertility has something to do with “life”. Their lawyers argued that they only objected to four kinds of birth control that they believed to be “abortifacients”, such as emergency contraception and IUDs. In reality, all the drugs and devices covered by the federal standards work by preventing pregnancy. IUDs and emergency contraception both work by preventing sperm from meeting egg.

But, in the end, all the lies about how some forms of contraception constitute “abortion” didn’t matter, and the court just generally ruled that religious objections to contraception were enough. This isn’t a big surprise. Many conservatives on the court have ties to the anti-choice community--- Justice Scalia’s wife is a hardline anti-choice activist---and so they are most likely familiar with the actual reason that the Christian right is hostile to abortion and contraception. It has nothing to do with “life”. In case there was any doubt about that, the Supreme Court issued a clarification, noting that there was no obligation for employers to claim to believe birth control is abortion. Just simply opposing birth control because you oppose non-procreative sex is reason enough not to offer it in your health care plan. It is all about sex and how they think Americans, especially American women, are having too much of it.

Anyone who has been watching  the anti-choice movement for awhile is not surprised to see Justice Alito, who wrote the decision, blithely assume that being anti-contraception is part and parcel of the broader Christian right agenda.  While most Americans don’t think of contraception as controversial at all, within anti-choice circles it’s simply accepted that contraception is a great evil that led American women astray. One of the main speakers at this year’s Right To Life conference, a radio host named Joy Pinto, went on a tear during a panel on opening night about how contraception was the real “war on women”. She said contraception was “coming from the pit of hell” and compared contraception to when Eve “bit the apple”.

That’s why it was no surprise to see that the “pro-life” people were out in force in D.C. in response to the Hobby Lobby decision, celebrating it as a win for their side, even though fewer women on birth control means more abortions. That’s why Life News, the preeminent anti-choice website, was ecstatic about the possibility that more women will be deprived of contraception.  This anti-abortion site doesn’t hide its anti-contraception views at all, with writers arguing things like, “Fertility is a natural condition of a woman” to argue that it’s wrong to stifle your ovulation with birth control. “I guess it is an admission of my age that I grew up in an era when it mattered to women that they be perceived as ‘ladies’,” Ann Scheidler of Life News writes, making it clear she believes any woman who uses contraception has debased herself.

Indeed, the argument that drives the anti-choice movement isn’t really “life”, but goes more like this: In some more “moral” past, women were so scared of pregnancy that they all waited until marriage to have sex and then only did it sparingly without enjoying too much, as befits a lady. (Never mind that women have been having sex outside of marriage and enjoying sex in an very unladylike fashion throughout all of history.) Now, thanks to legal abortion and birth control, women are having all sorts of sex without “consequences”, which is seen as a terrible thing, mostly because it’s not very ladylike. (It’s also blamed for the breakdown of “the family”, though the overwhelming evidence shows women who are able to delay marriage and childbirth through abortion and contraception have more stable marriages., making this more a fantasy than a reality.)  Some anti-choicers see women who choose sex as wanton hussies who need to be brought into line. However, it’s becoming increasingly fashionable on the right to portray women as inherently asexual beings who are being tricked by all this contraception into thinking they have to have sex, which allows them to argue that depriving women of reproductive rights is doing women a favor, by giving them an excuse to get out of that icky sex.

This argument has, by and large, not had much exposure to the general public and stayed within right wing circles, though Ross Douthat occasionally flexes the evils-of-contraception muscle in the New York Times. The Hobby Lobby decision, however, has forced the issue of contraception right into the mainstream, no doubt surprising many Americans who had no idea that there was anyone who opposed contraception, much less that there’s widespread antagonism against it when it comes to the Christian right. Hopefully, people will remember the lesson that this is not about “life” or “religion”, but strictly about the Christian right wanting to control female sexuality and punish women for having premarital sex ( about 95 percent of women) or for having non-procreative sex ( about 99 percent of women).

Indeed, the latest round of abortion attacks barely bothers with the “life” argument, except as a bit of window dressing. The new argument is that legal abortion needs to be ended for women’s own good.  Abortion, opponents argue, is sleazy and dangerous and women are better off having no access at all. The latest abortion case in from of the Supreme Court, which addressed the issue of “buffer zones” to keep protesters away from clinic doors, was influenced by this argument. The anti-choice lawyers portrayed protesters as gentle souls who simply want to help women, instead of the judgmental haters of old. The argument worked, and the buffer zone was struck down.

The “we’re here to help women” line doesn’t work if you assume the debate is over “life”. If anti-choicers really believed abortion was murder, they would hardly be eager to be seen as trying to help women they believe to be would-be murderers. No, the “compassionate” anti-abortion argument, like the anti-contraception argument, only works if you assume it’s all about sex. Women going into abortion clinics are seen by the anti-choice movement as wayward souls who need to be saved from their sex-having ways and turned towards a life of chastity and pushed to give birth as repentance for the sin of lust. You don’t send a bunch of judgmental grandmothers at people you think are murderers. The church lady brigade is the one you send out when you need people to cluck their tongues at young ladies these days for their supposedly unladylike ways.

This is made even more obvious when you look at the organizing force behind clinic protesters, who call themselves “sidewalk counselors”. Most of these protesters are aligned with “crisis pregnancy centers”, and they are trying to lure women seeking abortion into them. Once there, they will be told that abortion is killing, yes, but more than that. They are also subject to a wave of anti-contraception propaganda, all the better to imply that the only real option is to have sex infrequently and only for the purpose of procreation.

It was also the anti-choice movement that was behind the push for “abstinence-only” education in schools, of course, showing that the attempts to demonize contraception aren’t even that new, but date back to the Bush administration. The Bush administration also appointed a series of “pro-life” officials to the FDA that set out not to attack abortion, but contraception. They stymied the release of emergency contraception, which works by suppressing ovulation, out of fear that it would somehow encourage more sex. One official, Janet Woodcock, wrote a memo arguing that if emergency contraception was made available without a prescription, it “would lead adolescents to form sex-based cults centered around the use of Plan B.” Since then, Plan B has been made over-the-counter, and teen sex cults still have not erupted.

The scary thing, of course, is that the Supreme Court seems to believe that your fellow citizens have broad rights to try to impose their anti-sex views on you through harassment or, in the case of Hobby Lobby, docking your compensation package as a kind of sex fee. The good news is that the anti-sex argument is a losing argument. Perennial fussypants Ross Douthat even admitted, post-Hobby Lobby that the liberal arguments---that sex is good, theocracy is bad---are the majority opinions. He didn’t say this, but you can tell that liberals have won the larger argument because conservatives often cagily lie about their motivations, denying that they are out to attack sex or construct theocracy. But a case like Hobby Lobby flushes the true motivations out into the public, forcing conservatives to defend their position by admitting that they want sexuality to be treated like a weird, marginalized behavior to be punished instead of a normal part of everyday life.