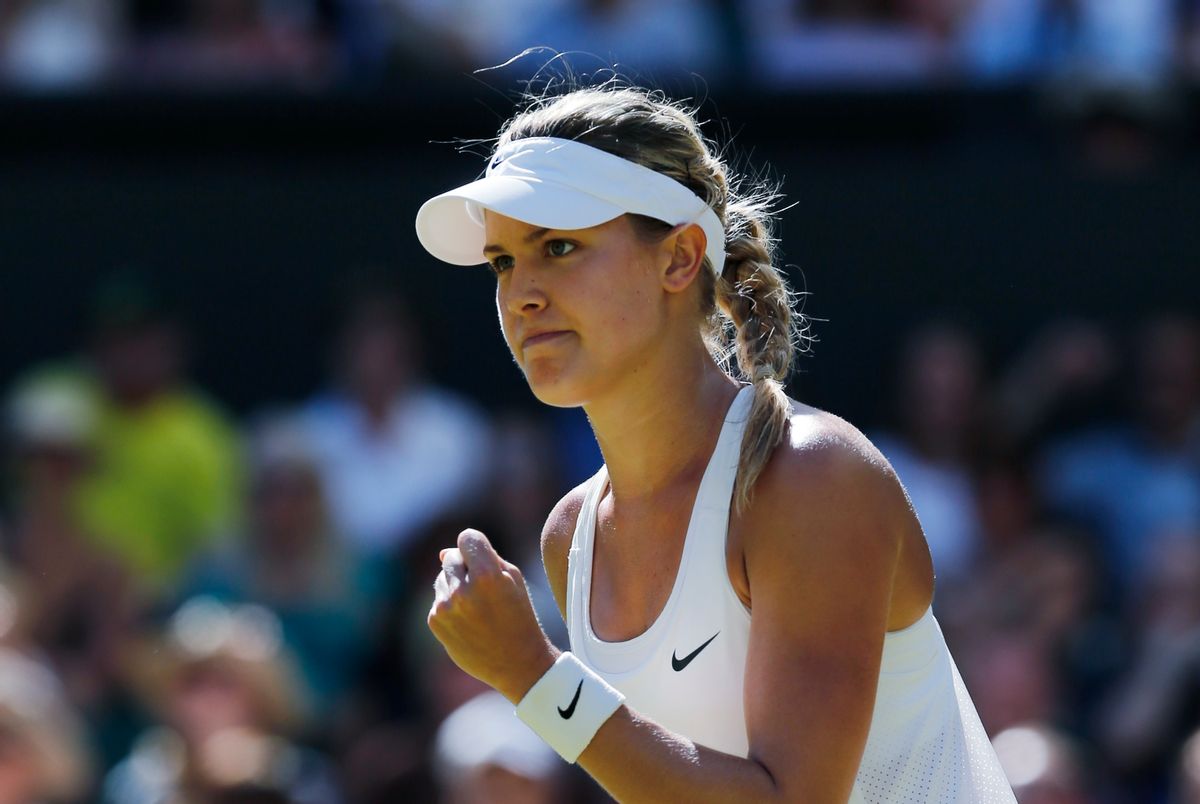 Eugenie Bouchard of Canada celebrates after winning the first set as she plays against Simona Halep of Romania during their womenâs singles semifinal match at the All England Lawn Tennis Championships in Wimbledon, London, Thursday, July 3, 2014. (AP Photo/Ben Curtis) (Ben Curtis)
--

TORONTO (AP) — Mary Jacobs has barely ventured outside in two weeks, but life has been thrilling. The 76-year-old tennis devotee has been glued to her TV as Canadian stars Eugenie Bouchard and Milos Raonic dispatch their rivals at Wimbledon.

Her devotion paid off big time Thursday when Bouchard became the first Canadian women's singles player to advance to a major final.

"The laundry is piling up and the fridge is nearly empty. I've barely left the house for the past two weeks and have scheduled everything around the games!" said Jacobs, a former recreational tennis player herself. "I haven't been this excited about tennis in a long time."

Her excitement rings true for much of Canada. The two tennis stars have become the delight of their country as they rise to the top of a sport Canada has rarely dominated.

Milos Raonic, 23, of Thornhill, Ontario, is in the final four of the men's draw, another first for Canada at Wimbledon. He was taking on Roger Federer, who owns 17 major titles, in semifinal play Friday.

"This is Canada's moment to shine," said Olinda Colaco, 78, shortly after watching Bouchard's victory. "I've almost stopped doing everything to watch these games. It's so nice to see Canadians doing so well and such young Canadians at that."

Bouchard, from Westmount, Quebec, is also the only woman to have advanced to all three Grand Slam semifinals this year. She won the 2012 junior title at Wimbledon.

No one is prouder than Bouchard's mother Julie Leclair, who cheered for her daughter from the guest box Thursday.

"I know it's the temple of tennis. I'm just so proud and I was hoping she'd hold her nerve and close it out," she said.

Leclair said her daughter started playing tennis when she was four years old with her twin sister Beatrice, who gave up the sport at age seven.

"You know, it was very progressive. (Eugenie) kept wanting to do more — two times a week, three times a week, five times a week, leaving school early, take extra lessons," Leclair said. "She just goes out every day trying to be the best she can be."

Leclair moved with her four children to Florida when Bouchard was 12 so her daughter could train at coach Nick Saviano's tennis academy.

"It was a huge sacrifice for the whole family, especially for the siblings," Leclair said. We stopped taking normal vacations when she was 12 because everything was centered around her schedule and tournaments and stuff like that. There was a financial sacrifice, family time sacrifice."

The payoff has arrived.

In just her sixth major tournament and as the tournament's 13th-seeded player, Bouchard will play for the championship Saturday against 2011 Wimbledon winner Petra Kvitova.

Bouchard is projected to rise to a world ranking of No. 7 — the highest ranking for a Canadian woman — by reaching the final and would go to No. 6 by winning the championship. She would also be the youngest major champion since Maria Sharapova won the 2006 U.S. Open at age 19.

Bouchard, who has become a media sensation, joked that she hoped another famous Canadian has noticed. After winning her semifinal Thursday, she was asked whether she thinks pop star Justin Bieber is aware of her successes.

"I hope so," she said. "I'm putting in so much hard work. I want to see this hard work rewarded."