I read all the books. Oh, I was so smug. And then came the hell that would imperil our home -- and my sanity 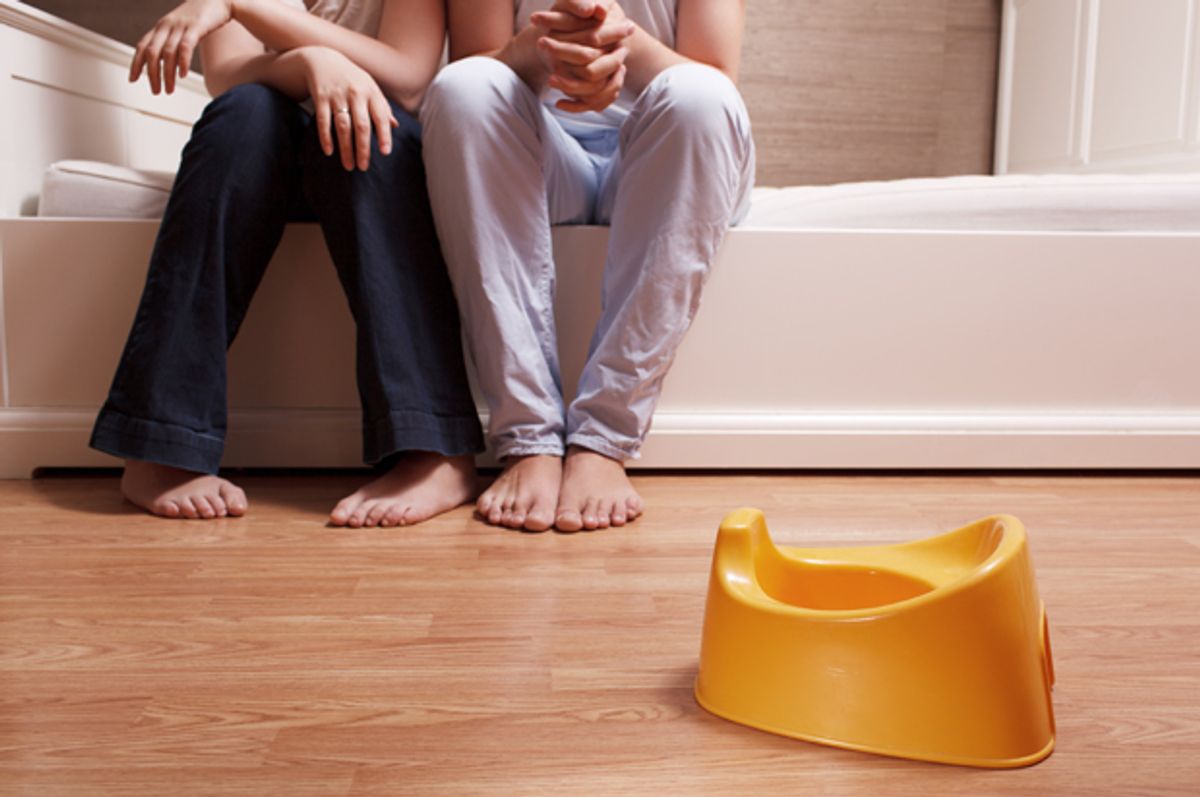 In my life, I have grilled politicians, broken bread with criminals, waded through floodwaters and stood perilously close to fires.  I was in labor for four days with little more than a strong aspirin on board.  I never thought there existed something that could break me, nay, crush me so utterly, so thoroughly; something that could send me over the cliff and into the existential abyss. But then, I had never tried potty training.

I love my son. I do. He is a very good boy. And I'd say on the whole I am a good mom; my husband, a good dad. But potty training has turned us into raving, twitchy lunatics.

We started out with such good intentions. We read the books, we watched the videos, interrogated our friends to find out what worked and sat in silent judgment on what didn't. Oh, we were so smug.

How hard could it be? After all, we learned to use the potty and all its variations including trees, alleys and one time even a milk carton in a moving car. All we have to do is be kind. Be understanding. Express to our little guy the fundamentals of how it works, show him to the toilet and bing, bang, boom, trained.

When our son was getting to be about 2 and a half, we decided to start talking to him about using the potty. We brought him in with us when we went, we explained how the toilet worked, how our bodies worked, we even explained to him the finer points of the wastewater sanitation system. Any time one of his favorite TV shows featured a potty pro, we made sure he watched it and then discussed the episode with him, in great detail, subtly planting the seeds that he too could be a big boy and use the potty just  like Daniel Tiger (who, seriously, what are they feeding that kid, he is constantly in the crapper).

Eventually we bought a potty seat -- some rubber contraption that sits on top of the bowl, and asked our son if he'd like to try using it. Of course he did, it was new and fun and an attractive shade of blue. My husband and I mentally high-fived; we had this in the bag. We could already hear the stories we'd tell our friends of how our son learned to use the potty in one glorious afternoon of awesomeness.

Then, things took a turn.

See he liked the potty, yes. He liked talking to us there, looking at the wallpaper, taking in some light board-book reading -- all from the comforts of his rubbery throne. He just didn't want to use it for anything else. Pretty soon the novelty wore thin as did our asking him every half-hour if he had to use the potty.  We'd ask. He'd say no. We'd say OK. He'd pee behind the couch.

Next came the screaming, thrashing, kicking -- I think he even spit once -- fits every time we took him near the bathroom. Fearing we were scarring him for life, we took a break. Every few months we'd try again, but it was the same screeching fit show as before. We were good parents. We figured we'd let him go at his own pace. We wouldn't push. When he was ready, he would come to the potty.

However, when he passed his third birthday with little interest in doing anything potty-related, we were getting nervous, worrying that somehow we'd be sending him off to Harvard with a mini-fridge and a sack of Husky-size Pampers. We had to try again. This time we would be even more prepared. When before we chaffed at the very notion of giving rewards for peeing, this time we'd make it rain. We bought trucks, candies, cars, stickers, special Spider-Man underpants and entire train sets. We set up charts.

We also spared no expense with the potty; rubber seats were for suckers, only top of line would do: a golden yellow, Elmo potty chair. Complete with a removable potty cup and flushing noise, this Cadillac of Potty Chairs featured the voice of Elmo exclaiming, "Hooray!" as he acted as our son's own personal bathroom ambassador.

We set a date and shelved the diapers. We explained to our son there would be no more diapers, that everyone has to use the potty eventually and that we were there to guide him through this next journey to personhood.

He peed on the carpet and wore the potty cup like a hat.

But we kept with it. We bought yet another potty seat -- this one bearing all the "Sesame Street" characters -- to sit atop the toilet. This one was more to his liking and he stopped screaming when we sat him on it. Once again, we thought we'd found the solution. Once again, we were wrong.

He peed on the porch. He peed in the corner. His junk was like a tiny terrible wand with which he bestowed his magic on our stairs, chairs and his little brother. He revenge peed on my favorite white lounger.  He pattern peed, like a little piddling Picasso.  He peed parkour-style across the length and breadth of my living room. I don't even want to say what happened behind his toy workbench. Let's just say I've seen some things.  That was the first day.

By day two, my husband and I were at loose ends. We hadn't showered and smelled vaguely of urine and Lysol. We were tiptoeing around our toddler who was no longer our child but a tinkling time bomb, and eyeballing each other as the reason for our utter failure to potty train.

Not willing to surrender, I took a new tack.  I would just tell him how his actions made me feel. I explained that when he firehosed my wall with urine, it made mommy feel very frustrated. That it was a lot of work to clean up and that I needed him to try just a little harder to tell me when he had to go before he went. Something softened around his eyes. He seemed to understand. He patted my arm, and then peed on my purse.  We tried being stern. He peed in the plants.

My husband suggested we stop. Try again in a few months, maybe the kid just needed more time. The very thought of going through this again broke something in my brain. I picked my baby up, brought him to the bathroom and shut the door. I can't say that I am proud of what happened next, but maybe it will serve as a cautionary tale for others. There, alone with my child in the bathroom, I broke down.

"Whaaaaaaat do you neeeeeed from meeee? What can I do? Tell me. How can I help you? Help me help you. I'll do anything you want. You want to stay up late? Done. You want to eat cake for dinner? That can be arranged. Do you want different candy? I know a guy. Different trucks? You can have trucks in every color of the rainbow from now until you graduate college. I'll do anything, but please, please, use the potty. I'm begging you. Just use it. Just once?"

He looked at me, a little shocked at my display. He patted my knee.

"Why are you tired, Mommy?"

"Because I need for you to use the potty and I don't know how to get you to do that."

We sat in there quietly for a long time.  He asked me what college was; I told him. He said he wanted to be a builder, I said OK. I apologized to him for getting frustrated. I told him I loved him so much. Then I told him that I knew we could figure this out and we would figure it out together.

The next time he peed, it was in the potty.

Melanie Plenda is a freelance journalist and writer whose work has appeared in The Atlantic.com, The New Republic and American Baby, among others. You can follow her on Twitter @Melanie Plenda.