From Mariah Carey to Run-D.M.C., the most critically acclaimed pop of the last 60 years was shaped by black rock 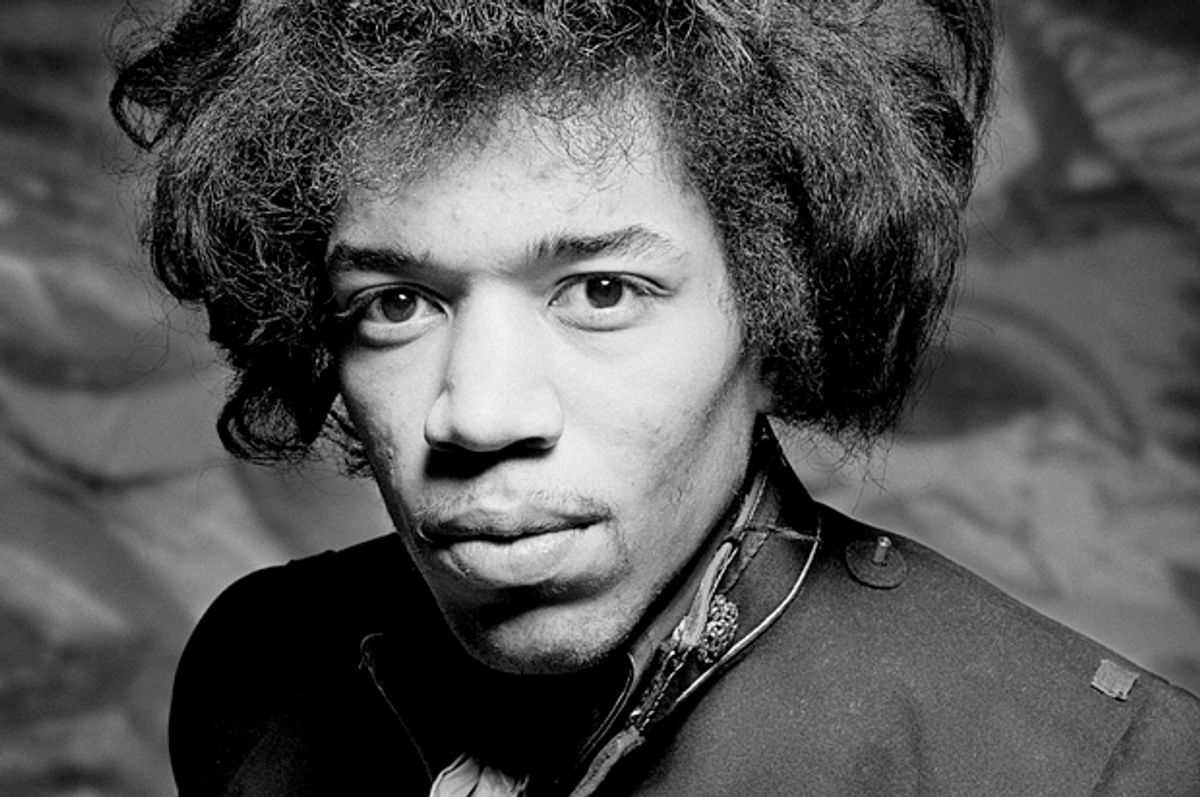 When people think of black rock musicians, Jimi Hendrix is often the first name that springs to mind. To some degree this makes sense; Hendrix is an incredibly talented and important songwriter, and certainly one of the all-time rock greats. But regarding Hendrix as the beginning and end of a genre can be deceptive.

The list below proves that rock has been black music from the beginning, long before Hendrix, and has remained black music up to the present day. (Hat tip to Dee at  http://blackrockandrollmusic.tumblr.com for the idea for this post.) Basically, black rock music is central to the most critically acclaimed pop of the last 60 years.

Roy Brown was one of the great jump blues vocalists, foreshadowing Little Richard in his explosive vocal style, and any number of raunchy rockers in his single-entendre penis jokes ("Oh, Pete, he loves that meat!"). Rockabilly is often presented as the beginning of rock. As a result, jump blues performers like Brown and Wynonie Harris, who laid the groundwork for Elvis and Jerry Lee, are mistakenly seen as outliers rather than founders.

Musicians like Chuck Berry and Bo Diddley are, like Hendrix, performers who can be easily slotted into a narrative about white guitar bands. LaVern Baker shows how limited that view is. A major, successful, early rock star, her music was horn- and piano-based rather than rooted in guitar and country. "Soul On Fire" in particular, is in a torch song tradition that has remained part of rock, from Aretha to Joni Mitchell to Journey.

One of the most massively influential rock records of all time. The rhythmic assault and lascivious lyrics of "What'd I Say" convinced Paul McCartney to become a musician; it was the first song performed by the band that would become the Rolling Stones, and the blueprint for black rock artists from James Brown to Aretha Franklin. It became a standard in the repertoire of Jerry Lee Lewis. Yet Charles is rarely mentioned among the seminal early rock artists like Elvis or Little Richard. Instead, he's pigeonholed as the inventor of soul, as if inventing soul somehow means he can't have invented rock as well.

Even playing guitar isn't necessarily enough to get black artists acknowledged as rockers. Howlin' Wolf's harsh, dirty sound, influenced by blues and country, is an essential part of the DNA of heavy rock, and Wolf was recording at the same time as canonical rock stars. Yet he's called "blues." Maybe it's all part of some sort of plot to make "Exile on Main Street" look original?

Girl-group pop was an essential subgenre in early rock. It was a major influence on rock bands like the Beatles and the Beach Boys, not to mention Ray Charles, with whom many of the Cookies recorded as the Raylettes. This track shows that Beatles and Beach Boys' influence is coming back around. "Wounded" isn't some embalmed source for the rock music innovations of white-boy geniuses, but a slice of psychedelic rock itself.

Redding was a huge Little Richard fan, and performed with Richard's backing band early in his own career. But, in a quintessentially rock star mode, his influences were eclectic; he'd cover blues and country as well as rock songs like the Stones' "Satisfaction." This performance of James Brown's "Papa's Got a Brand New Bag" is so tight and fierce it just about turns into metal — hard rock funk.

One of the great progenitors of electric guitar rock listened to his disciples on both sides of the Atlantic, and then stepped up to show them he could beat them at their own game. King is supposed to be a blues artist, but if this were recorded by Zeppelin or ZZ Top, there's little doubt where it would be shelved at your local record store.

Davis' "On The Corner" was hugely controversial when it came out; his use of tape loops and electronics and the studio as an instrument alienated jazz purists and just about everybody else. The album's genius has long since been recognized. And yet, though its eclecticism, experimentation and fierceness scream "rock!", "On the Corner" still never gets mentioned in lists of greatest rock albums, and Miles is never really considered as an important rock musician. But he is.

Rock and disco are supposed to be sworn enemies. But if the rhythmic funk of Ray Charles and the vocal tradition of LaVern Baker are seen as part of rock, it starts to look like disco is an offshoot rather than an opposite. Donna Summer's great, swaggering disco-rock fusion in this case isn't a synthesis of strangers, but a reunification of siblings, separated briefly perhaps, but both raised on gospel, blues, snarling guitars and rhythmic hot stuff.

Like Hendrix, Funkadelic is often presented as the quintessential example of black funk rock; the one soul funk band interested in crossing over. Funkadelic was certainly rock — but seeing George Clinton as singular obscures the way that '70s funk in general both engaged with the tradition of Ray Charles and reached out to the neighboring subgenre of hard rock. Stevie shows here, as he often did, just how arbitrary that line between soul and rock is.

"Hey, this is a rock and roll museum! You guys don't belong in here!" Run-D.M.C. begs to differ. Who says a hip hop band can't play rock? "Music ain't nothin but a people's jam/ It's DJ Run-D.M.C. rockin without a band." I think the best part is when they unplug Jerry Lee Lewis. He really would have hated that.

Like Funkadelic before him, Prince is seen as the iconic soul-to-rock crossover artist of his day. This is especially confused given how pervasive the man's influence was; the Minneapolis Sound was everywhere., and Jody Watley's massive hit is just one example. "Looking for a New Love" was produced by André Cymone, a bassist who worked with Prince, and it's got that archetypal synth-New Wave funk sound. Which makes it rock, even if Prince himself didn't happen to be in the studio to do a guitar solo.

Run-D.M.C. presented hip hop as a logical extension of rock. De la Soul is less straightforward; "Who Do You Worship?" is basically a parody, sneering at the banal satanic posturing of hard rock from Mick Jagger to Slayer. Part of the joke, though, is that that posturing is part of hip hop too. Rap, de la seems to say, is just more rock stars pretending it's cool to be an asshole. And of course you have to be a swaggering jerk to point that out — which is totally rock and roll.

The importance of gospel performers like Rosetta Tharpe to early rock is rarely discussed, but you can't miss it when you listen to this amazing recording. Aubrey and Lori Ghent perform in a sacred tradition of steel guitar which has grown up in Florida and a number of other states. This fiery live show has obvious links to both Ray Charles-style rhythmic rock and the gritty blues guitar of performers like Howlin' Wolf and Freddie King. The compilation Sacred Steel, which collects performances by Ghent and many others, is one of the great unsung rock recordings of all time.

Carey's mixture of pop and rhythm recalls girl groups, classic Motown and bands like the Beatles. How is "Heartbreaker" categorically different in approach, or message, or execution from something like "I'm a Believer" — and why do the Monkees get to be (critically appreciated) pop rock, and Mariah Carey doesn't?

In 2008 James Hannaham wrote a Salon article about TV on the Radio in which he bemoaned "the nearly total segregation among bands who have played rock music since the early ’70s." That segregation existed — but in the minds of music critics, not in the performances of black musicians. Cee Lo Green is generally pigeonholed as a hip hop artist, even though, as "Super-Chicken" shows, he's steeped in a Southern stew of soul, gospel and funk. In case you missed it, that's the formula for rock.

Brooke Valentine, "Thrill of the Chase" 2005

Brooke Valentine is virtually forgotten, but she was one of the most inventive and audacious R&B performers of the 2000s. This non-album track is a good example of why — "Thrill of the Chase" is built around a massive hard rock riff spiced with touches of reggae and gangsta heavy bottom. Valentine's willingness to experiment was probably what doomed her commercially; the separation of R&B from rock can inhibit the kind of intermixing of black and white styles that made rock possible to begin with.

The Dixie Cups' "Iko Iko" was a famous early rock girl group performance that incorporated folk rhymes and nursery-like chants; the Dixie Cups used an aluminum chair, an ashtray and a Coke bottle for percussion. Rye Rye and M.I.A. pick up on that gleeful tradition, blending girl harmonies and skip-rope rhythms.

SZA's recent release "Z" is part of the latest wave of alt-R&B by folks like Solange, Kelela and Dawn Richards — artists who are as much indie rock as soul, and seem as influenced by Bjork as by Beyoncé. It would be nice to think that this innovative effort to cross musical boundaries could prompt a reconsideration of those boundaries themselves.