Ronald Reagan stuck it to millennials: A college debt history lesson no one tells

Dramatic, awful changes occurred on my generation's watch -- and it amounts to a fiendishly successful conspiracy 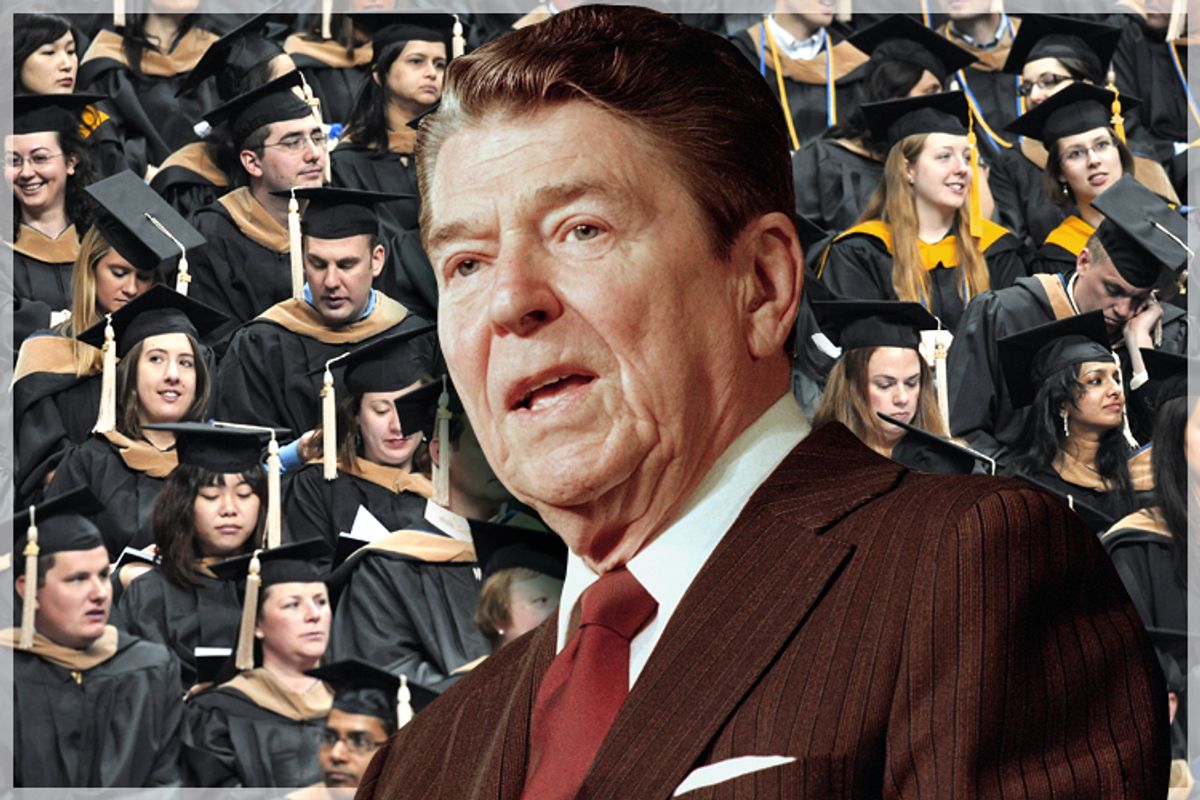 That nostalgic time of year for newly minted college grads and their professors has now concluded. I admit to being affected by the academic robes I pull out for commencement, not to mention the students I’ve taught for the past four years, who are finally ready to make the leap into the “real” world.

This spring was a bit different. It marked the 30th anniversary of my own graduation from college. And as I headed east for my reunion, I thought about how my daughter (a sophomore) and the rest of her millennial cohort have inherited a radically different academic world than the one I toasted with my friends from the Class of 1984. The changes -- and they were dramatic -- occurred on my generation’s watch, and were not just a series of unrelated misfortunes. On the contrary, the new world is the end product of a fiendishly successful conspiracy.

During my first semester of college, John Lennon was assassinated 40 blocks south of my freshman dorm, and Ronald Reagan, the former governor of California, was elected president of the United States. I was devastated by both of these events. At the time, I had no idea that the Great Communicator had cut his teeth on campus protests during the 1960s, using long-haired Berkeley students as perfect foils. Reagan assailed the Free Speech and antiwar movements, promising the taxpayers that if elected, he’d get college kids off picket lines and back in class. With comments like, “They are spoiled and don't deserve the education they are getting” and that the state “should not subsidize intellectual curiosity,” he won in a landslide. Fourteen years later, Reagan was elected president, running against a host of mythical foes from “welfare queens” to an omnipotent “Evil Empire,” but he and his administration never shed their antipathy toward “elitist” campuses and the young people who dared question the system.

The students Reagan loathed were the beneficiaries of a consensus that paired the GI Bill with the post-Sputnik explosion of higher education to offer no- to low-cost access to public institutions, and aid to those who needed it to make private college possible. Students were not expected to shoulder the burden of their educations alone, and this freed them to explore who they wanted to be and the kind of America in which they wanted to live. There were many adults, of course, who despised them for just this freedom, and powerful forces terrified of the changes they saw coming.

By the time Reagan was elected to the nation's highest office a decade and a half later, these powers had devised perfect tools to make sure the spirit of 1960s protest would never again erupt on campus. During Reagan’s two terms as president, dedicated funding for outright grants-in-aid decreased, federal guidelines pushed individual loans, and private bill collectors were brought in to ensure that the hardest kind of debt to escape was whatever you took on for your education. Even more important was the shift in tone and expectation. Public goods became private services, and by the end of the 1980s, the anti-tax, infra-structure-starving, neoliberal Weltanschauung meant that as states cut their budgets, support for higher education was thrown into a cage match with every other necessary public good.

Had anyone at my reunion complained about the complacency of today’s students or bragged about how they got through school without taking on staggering debt, I could have reminded them that the class of ’84 was the last to have a higher percentage of grants than loans. Today’s imbalance leads too many students to buy the lie that the humanities are exclusively for rich kids. They worry that those in the 99 percent studying Aristotle or Virginia Woolf are destined for permanent residency in their parents’ basements and, if they are lucky, positions as baristas.

These same students are pressured to major in “practical” subjects like business or the STEM fields (science, technology, engineering and mathematics), even though this year, more than 80 percent of all students, regardless of major, didn't have a job lined up a month before graduation. Worst of all, these students’ sense of the future is constrained by planning for and then paying down their student loans, often for decades. Economists are waking up to the fact that when young Americans enter the workforce burdened with over a trillion dollars in cumulative debt, they become risk averse, unwilling to move, less able to make major purchases, and slower to become homeowners. Not coincidentally, they don’t feel safe enough to register any major protests against the society that’s done this to them.

As we progressed in our careers and raised our families, the Class of ’84 acquiesced to a world in which students who wanted to better their situation chose between private colleges that built staggering debt into their aid packages, and public institutions that have had their state funding slashed to the bone, incentivizing them to make up for shortfalls by raising tuition and, just like their private counterparts, piling on the loans.

When these students graduate from college, and even worse, if they don’t, they will have taken on burdens that are almost impossible to negotiate much less erase, no matter the shape of the economy the day they leave campus. If they aren’t protesting about this, it’s not because they’ve been bought off by rock climbing walls in the gym and fresh pesto in the dining halls, or because they all want to be investment bankers. The terror of decades of loan payments is a far more potent silencer than any police baton. Since 1997, the Ronald Reagan Legacy Project has made its mission to have at least one thing named after the 40th president in each of the nation's 3,141 counties. Too bad there’s nowhere to mount a plaque with Reagan’s name over the debtors prison without walls he built for the nation’s young.

Peter Lunenfeld is a professor in the UCLA Design Media Arts department. He is the co-author of Digital Humanities and recently published The Secret War Between Downloading and Uploading: Tales of the Computer as Culture Machine.