What would the Founding Fathers have thought about our libertarian crazies?

Modern-day libertarians fancy themselves freedom fighters. How would their fantasies strike our nation's founders? 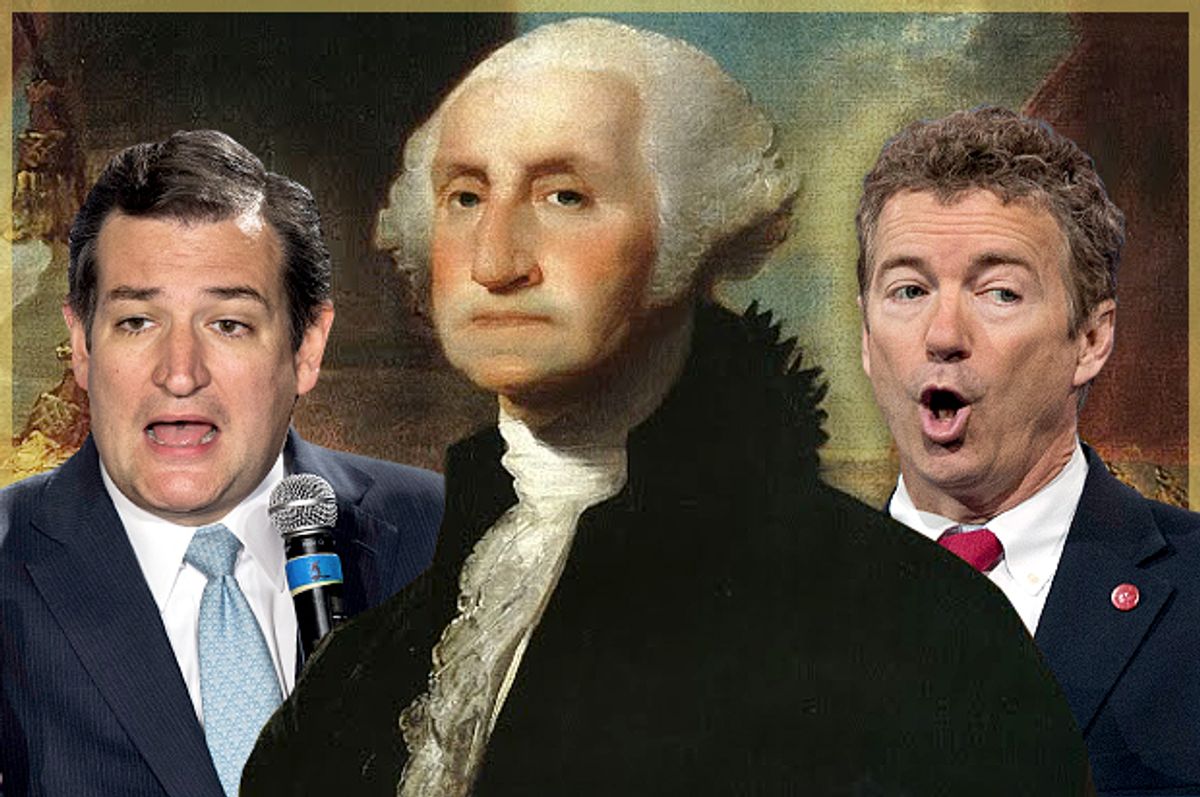 When in the course of human events, it becomes necessary for one people to dissolve the political bonds which have connected them with another...

Say whatever nasty things you want about those slave-owning white men that got the US-of-A up and running, but there is little question that the Declaration of Independence offers a compelling rationale for the selfishness of secession. Which raises a question: If the Founding Fathers were posting on Facebook and tweeting on Twitter in 2014, how would they assess the current discontents and escapist fantasies of contemporary techno-libertarianism? The timing seems right for an investigation. The rhetoric of liberty -- so essential to the creation of the United States, so beloved by both Tea Party radicals and Silicon Valley startup entrepreneurs -- is a Fourth of July weekend staple.

Thomas Jefferson, Benjamin Franklin, John Adams... these men made a winning case for why the colonies should sever their ties to King George III. But what would they think of software engineer (and Milton Friedman grandson) Patri Friedman's dream to create his own "startup country" afloat in international waters -- a libertarian paradise that would "show what a society run by Silicon Valley would look like." Would they approve of venture capitalist Balaji Srinivasan's advocacy for virtual secession, his plan to "build an opt-in society, run by technology, outside the U.S.?" You can hardly go a day in Silicon Valley without hearing from a CEO restless to dissolve the political bonds that constrain his disruptive business plan. What could possibly be more American?

In pursuit of clarity on the American Dream, I reread the Declaration of Independence, for the first time in many years. And then I reread John Perry Barlow's 18-year-old libertarian statement of founding principles for the Internet era, " A Declaration of the Independence of Cyberspace." And then, finally, there could be no avoiding the manifesto penned by Peter Thiel, Silicon Valley's most prominent (and richest) despiser of all things governmental.

I confess, my working thesis when I started out was that the Founding Fathers wouldn't be too thrilled with the selfishness of Silicon Valley. But my faith has been shaken. Yesterday's King George has been replaced by today's Congress, and the list of grievances is long in both cases. A great dissatisfaction with the status quo, coupled with the belief that we can do better with less onerous supervision, is as American as apple pie. Ben Franklin might cast a sour eye on how much Facebook paid for Whatsapp, but I'm not so sure he wouldn't recognize a kindred spirit in freedom fighters of the new economy. All these guys want is independence. What could be more patriotic?

First let's consider this passage from the Declaration of Independence:

He has plundered our seas, ravaged our coasts, burned our towns, and destroyed the lives of our people.

He is at this time transporting large armies of foreign mercenaries to complete the works of death, desolation and tyranny, already begun with circumstances of cruelty and perfidy scarcely paralleled in the most barbarous ages, and totally unworthy the head of a civilized nation.

He has constrained our fellow citizens taken captive on the high seas to bear arms against their country, to become the executioners of their friends and brethren, or to fall themselves by their hands.

He has excited domestic insurrections amongst us, and has endeavored to bring on the inhabitants of our frontiers, the merciless Indian savages, whose known rule of warfare, is undistinguished destruction of all ages, sexes and conditions.

When we think about the Declaration today, we are most likely to recall the famous passage that "all men are created equal, that they are endowed by their Creator with certain unalienable rights, that among these are life, liberty and the pursuit of happiness." But the vast majority of the document is actually a long list of grievances. And, one must concede, judged as propaganda designed to rationalize the justice of revolution, it's pretty effective stuff. Rabble-rousing to the max, one might even say.

But when you boil it all down, the substance is straightforward: We don't like the way we are being treated, so we are opting out of the current arrangement. Every Silicon Valley engineer who has bolted his employer to form a new startup knows exactly how those proud Virginians felt. Our stock option grants were not generous enough -- raise high the standard of revolution!

In contrast to Jefferson's great screed, Barlow's "Declaration of Independence for Cyberspace" is a more proactive, forward-looking document, less concerned with the injustices of the moment, more obsessed with the oppression that is certain to come. At the time of its writing, 1996, few would have argued that a latter-day King George was already oppressing the new settlers of the digital frontier. But Barlow was taking no chances:

Governments of the Industrial World, you weary giants of flesh and steel, I come from Cyberspace, the new home of Mind. On behalf of the future, I ask you of the past to leave us alone. You are not welcome among us. You have no sovereignty where we gather.

We have no elected government, nor are we likely to have one, so I address you with no greater authority than that with which liberty itself always speaks. I declare the global social space we are building to be naturally independent of the tyrannies you seek to impose on us. You have no moral right to rule us nor do you possess any methods of enforcement we have true reason to fear....

We are creating a world that all may enter without privilege or prejudice accorded by race, economic power, military force, or station of birth.

We are creating a world where anyone, anywhere may express his or her beliefs, no matter how singular, without fear of being coerced into silence or conformity.

Your legal concepts of property, expression, identity, movement, and context do not apply to us. They are all based on matter, and there is no matter here...

These increasingly hostile and colonial measures place us in the same position as those previous lovers of freedom and self-determination who had to reject the authorities of distant, uninformed powers. [Emphasis mine.] We must declare our virtual selves immune to your sovereignty, even as we continue to consent to your rule over our bodies. We will spread ourselves across the Planet so that no one can arrest our thoughts.

Barlow could hardly be more direct in his implication: The citizens of cyberspace were 1996's equivalent of the Founding Fathers. Their grievances were real, while his were imaginary, but the spirit is the same.

Barlow could also hardly be more wrong. The notion that legal concepts of property do not apply to cyberspace is laughable. (For example: Try asking a woman if she feels comfortable expressing her beliefs online "without fear of being coerced into silence or conformity.") But what's most striking about this document, 18 years later, is how focused it is on the wrong threat. The control exerted by government in the digital domain is nothing compared to the free-market corporations that colonized the Matrix. What could possibly be more restrictive of "freedom" than the companies that are tracking our every mood or conducting experiments on our emotions or monopolizing our economic behavior. By asking government to stay out, Barlow invited the market to take over. It's hard to see that as a win-win for freedom.

But even Barlow's grandiloquence is weak tea compared to PayPal founder and early Facebook investor Peter Thiel. Thiel is a libertarian determined to back up his rhetoric with his unlimited cash. He's also a major funder of the Seasteading Institute, the organization bankrolling Patri Friedman's efforts to float his own libertarian sovereignty.

In his 2009 statement of principles, Thiel wrote:

I stand against confiscatory taxes, totalitarian collectives, and the ideology of the inevitability of the death of every individual. For all these reasons, I still call myself “libertarian.”

In our time, the great task for libertarians is to find an escape from politics in all its forms — from the totalitarian and fundamentalist catastrophes to the unthinking demos that guides so-called “social democracy.”

As an entrepreneur and investor, I have focused my efforts on the Internet. In the late 1990s, the founding vision of PayPal centered on the creation of a new world currency, free from all government control and dilution — the end of monetary sovereignty, as it were. In the 2000s, companies like Facebook create the space for new modes of dissent and new ways to form communities not bounded by historical nation-states. By starting a new Internet business, an entrepreneur may create a new world. The hope of the Internet is that these new worlds will impact and force change on the existing social and political order. The limitation of the Internet is that these new worlds are virtual and that any escape may be more imaginary than real. The open question, which will not be resolved for many years, centers on which of these accounts of the Internet proves true.

Thiel's manifesto is most famous for blaming "the vast increase in welfare beneficiaries and the extension of the franchise to women" for rendering "the notion of 'capitalist democracy' into an oxymoron." It's easy to get distracted by his views on suffrage (which, of course, would be quite familiar to what the Founding Fathers enjoyed). But in our get-out-the-vote zeal we should not miss just how how fundamentally radical Thiel's position is. The Founding Fathers did not deny the authority of government -- they just wanted to set up their own government. But Thiel and his brethren want to escape politics altogether!

It seems ridiculous, until you contemplate the possibility that the floating sovereign state to which Silicon Valley plans to emigrate might be populated only by a few guys and a bunch of robots. Suddenly, the great escape seems possible.

And really, what could be more American? The great lure of the founding story of the United States is its tale of successful escape. The Founding Fathers pulled it off -- they acted in their self -interest, threw off a burdensome government and, well, made glorious history. It's no myth. It actually happened. For anyone frustrated with their current circumstances, from 2-year-old toddlers denied that extra cupcake to Silicon Valley CEOs who can't stand unions and income taxes, the successful pursuit of happiness in 1776 is an inspiration and a roadmap.