The suburb of the future is here 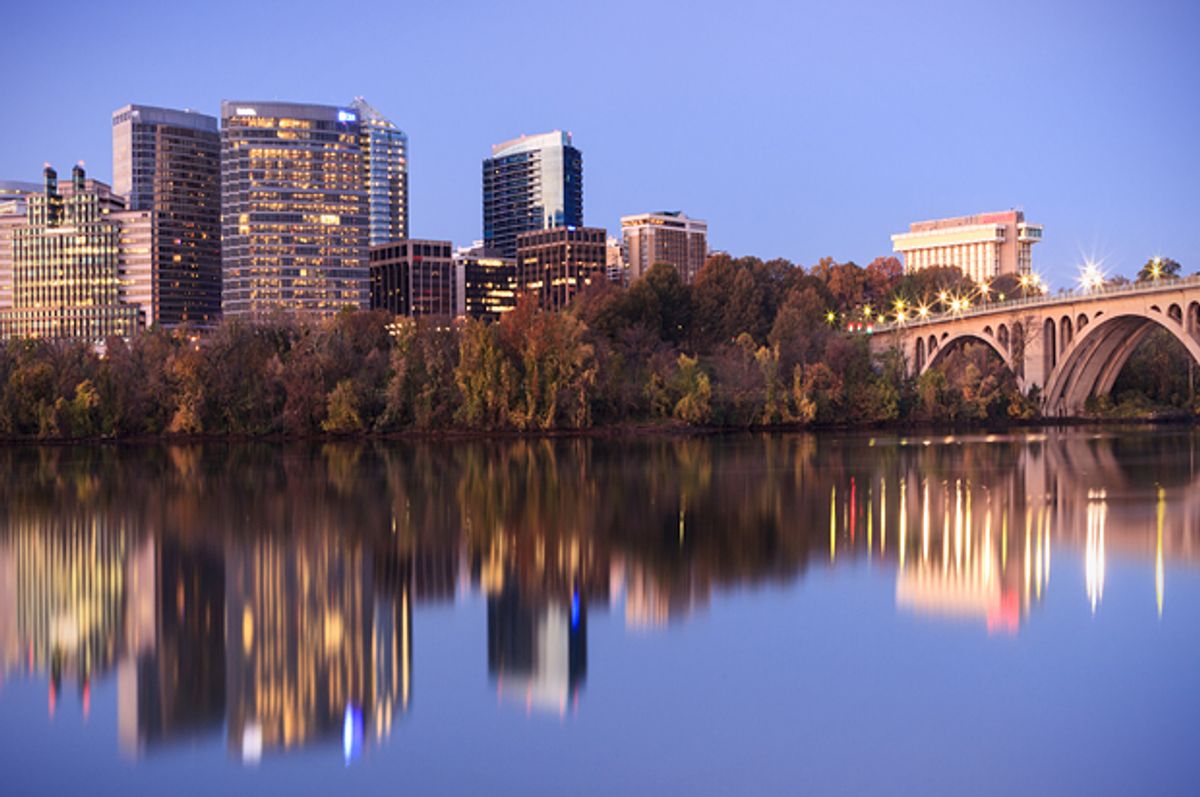 We often associate high-density cities with car-free life, and rightly so. But the concentration of businesses and residents also makes roads more crowded. That’s why dense, transit-friendly cities like New York have longer commute times than sprawling, transit-deficient cities like Phoenix. Think of it this way: New York has fewer cars per capita, but even fewer roads per capita. And building mass transit, contrary to popular belief, doesn’t generally reduce traffic congestion. (Neither, by the way, does the expansion of roads.) Growth produces traffic, and urban growth produces even more.

That second spurt of growth did not look much like the first: The new Arlington reached for the sky, with clusters of high-rise buildings that today give the county a more impressive skyline than the squat panorama of the capital. What’s more, population numbers don’t tell half the story. Office space in America’s fourth-smallest county has expanded from about 6 million square feet in 1960 to about 40 million today — making it a greater employment center than downtown Dallas or downtown Denver.

And here’s the really remarkable thing: Despite the influx of tens of thousands of workers and residents, despite the transformation of this sleepy suburb into a mid-size city, traffic has thinned. Nearly 20,000 cars traveled along Wilson Boulevard, a major east-west route here, each day in 1980. Today, that number is down to 13,000. Other arterials have shown similar declines: On the six-lane Jefferson Davis Highway (yes, Virginia has one of those), traffic dropped by 15 percent between 1996 and 2011/12. During that same period, the Lee Highway and Washington Boulevard also recorded 15 percent reductions in traffic.

In essence, Arlington has shown that the mistakes of American suburban development can be corrected within a few decades. The county won the Environmental Protection Agency’s 2002 award for Smart Growth Achievement, and its planning history is so locally celebrated that the county commissioned an hour-long documentary about its transformation from bedroom suburb to thriving city.

The story begins in the 1960s, when Arlington’s old-style suburban way of life was threatened by more distant suburbs offering bigger stores, bigger roads and bigger yards. But a series of decisions taken in the 1970s allowed Arlington to reinvent itself. First, the county litigated to prevent Interstate 66 from carving up Rosslyn, forcing the highway into a more circuitous riverine route. Second, as the newly built Washington Metro pushed into Virginia, planners pushed for a series of underground stations in the midst of the urban fabric, instead of acceding to the much cheaper method of running the tracks in the highway median.

Around the new Metro stops, the county devised a series of “bull’s-eye" plans for high-density, mixed-use developments. Between 1970 and 2000, the Rosslyn-Ballston corridor — just two square miles — added 15 million square feet of office space and 15,000 residential units. Adding in the Metro corridor in nearby Crystal City, Arlington’s seven “station sectors” produce half of the county’s real estate revenue from just 7 percent of its area. It may be the only American suburban district where fewer than half of residents drive to work.

But without citizens’ willingness to support high-density zones, Arlington would still look much as it did in the Kennedy administration. “Why it’s worked is because there was community consensus back in the ’60s,” explained Robert Brosnan, the director of Community Planning, Housing and Development in Arlington. "What most people fear is you say you will stick to your plans but you don’t, and the boundary between development and single-family homes is going to change over the years. Well, it hasn’t changed.”

That lesson has spread to neighboring counties in the D.C. metro, which recently earned the top rating in a study of “walkable urban places” conducted by Leinberger and Patrick Lynch, of the George Washington University School of Business.

"What has happened in this region, which I have never seen anyplace else, is as other suburban areas begin to urbanize, neighborhood groups around them have organized to demand the county triple the density that’s allowable,” said Leinberger. In Fairfax County, where the Metro continues in the median of Interstate 66, planners and residents now seek to emulate Arlington’s success.

Yet NIMBYism, motivated by fear of change or a resistance to newcomers, continues to paralyze Arlington-style transformations from Boston to the San Francisco Bay. In Long Island, for example, residents warn of “Queensification” – in reference to nearby New York borough – even as local young people move away at their first opportunity … more than a few of them to Queens.

“They can’t stand how boring the place is,” Leinberger told me. “Eight percent of you [in the New York area] live like Jerry Seinfeld, and the other 90 percent live like Tony Soprano in McMansions spread over five states at a density less than Los Angeles. Your great opportunity up there is the urbanization of the suburbs à la Arlington. And you already have the transit in place.”

But if Arlington’s transformation has been unusual, its advantages were also atypical. Its proximity to Washington is extraordinary – it was part of the original diamond plan of the nation's capital – and its neighborhoods are mere minutes from Washington’s central business district. It has the good fortune to be served by a subway, running every five to 10 minutes, rather than a commuter rail.

Finally, Arlington benefits from D.C.’s supercharged real estate market. The District is not only one of the country’s most expensive places to live and work. It also, in the form of the Height Act, has one of the most restrictive urban development laws on the books.

You could argue that those circumstances make Arlington a less relevant example. But without a doubt, there’s one lesson whose import will resonate with suburbanites from Huntington to Palo Alto: No suburb can urbanize without the support of its residents.

In Arlington, the fruits of that open-mindedness are on full display.