A breakthrough in the Nigerian kidnappings

Reports of a mass escape from Boko Haram 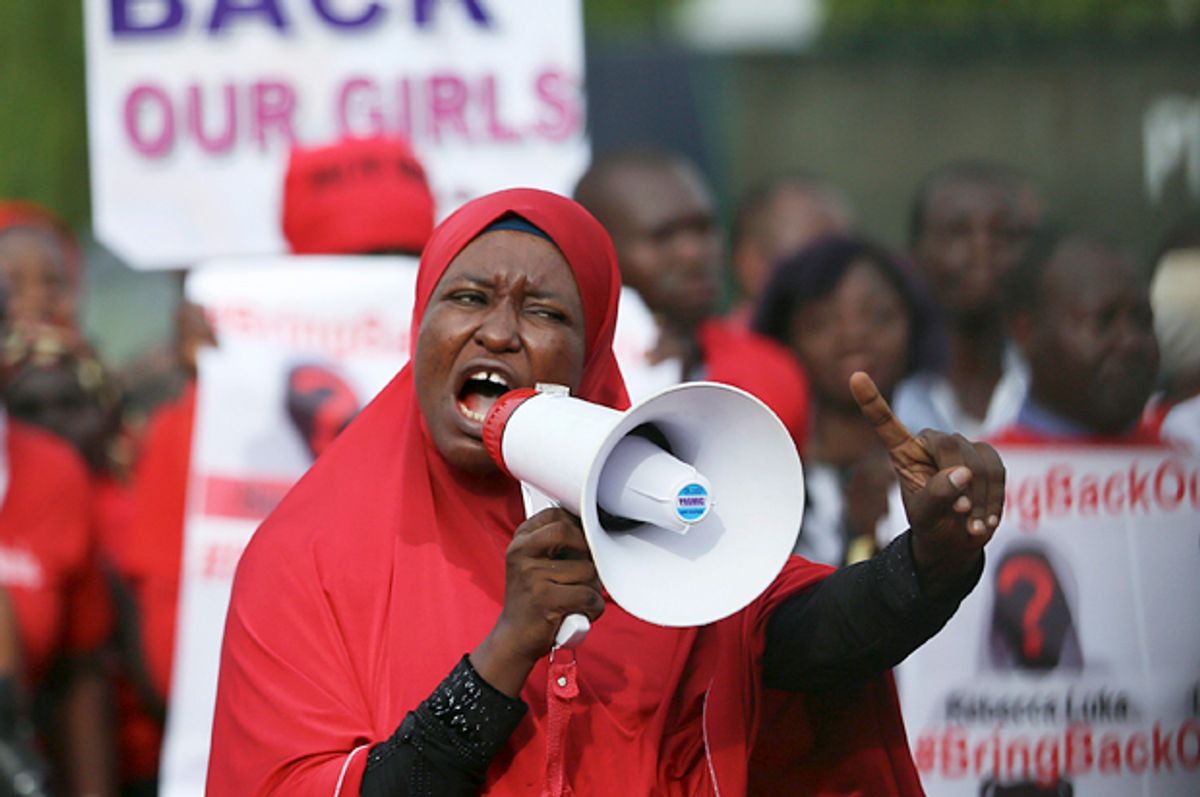 In a surprising twist to one of the most shocking human rights stories of the year, the international press is reporting that over 60 women and girls believed abducted by Boko Haram two weeks ago escaped from their captors last week and have "made it back home."

In April, over 200 schoolgirls were abducted from the Government Girls Secondary School in Chibok in a violent overnight attack. The Islamic militant group quickly claimed responsibility for the mass kidnapping in a video in which a group leader vowed, "I will sell them in the market, by Allah. I will sell them off and marry them off. There is a market for selling humans. Women are slaves." The story was initially underreported, until a groundswell of local protest brought attention to the crime and "Bring Back Our Girls" became a rallying cry. But attention does not equal results, and as the weeks dragged on, deep frustration with the lack of progress in returning the girls – and accusations that Nigerian authorities were not doing enough to return them – were running high. Nigeria's defense chief Alex Barde explained in June, "We can't go and kill our girls in the name of trying to get them back." As recently as Sunday, 50 protesters were turned away from a march to the presidential palace in Abuja. Activist Aisha Yesufu told reporters at the time, ''We have been coming out for 68 days and nobody has really listened to us." More alarmingly, the abductions have brazenly continued, including the one of 68 women and girls in northeast Nigeria in June.

But in the midst of a seemingly hopeless situation, Abbas Gava, a "local vigilante" working with security officials, reported early Monday that he had "received an alert from my colleagues" regarding the victims of the June abduction -- "that about 63 of the abducted women and girls had made it back home." Gava said that the females ''took the bold step when their abductors moved out to carry out an operation" and fled while they were out in an attack on a Domboa military base. An anonymous "high-level security source" in Borno State further confirmed the report. NPR revealed Monday that "Relatives have confirmed that they are indeed safe," but adds that "Insecurity is rife in this restive part of Nigeria, making it difficult to confirm such reports." It is believed that between 30 and 50 young women also escaped during the Chibok abduction in April.

The abductions and the violence that Boko Haram are wreaking in the region remain a real and ongoing threat, and the return of what amounts to a handful of individuals doesn't change that. Nor does it say anything about the potential consequences to those left behind, including the Chibok girls. But it does make it clear that a group of girls and women were able to achieve something their own government could not. It does offer a glimmer of hope for others. It sends the message to their captors – and the rest of the world -- that these women are not to be written off as irretrievably lost. But it also suggests that the ultimate heroes of the story, the ones to bring back our girls, will be the girls themselves.