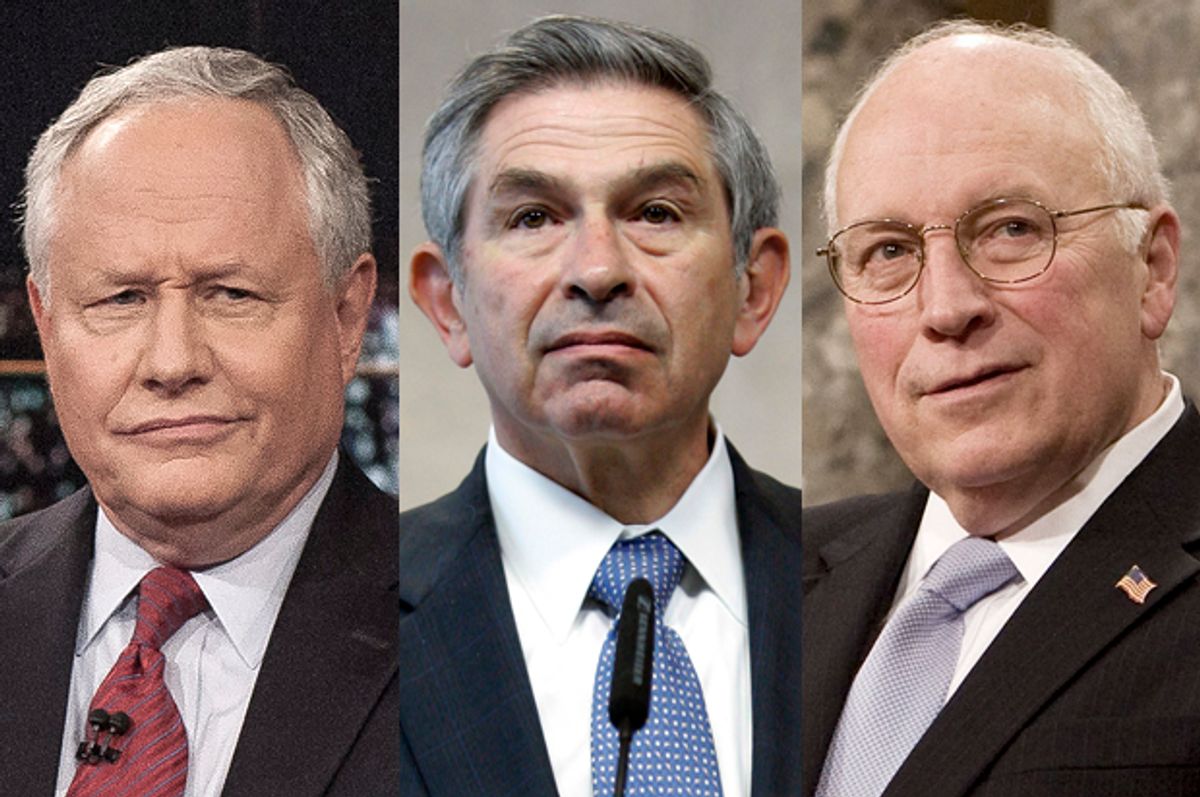 There are many voices criticizing the prominence of neoconservatives who've been weighing in on the crisis in Iraq, since it was the neocon-advanced idea of invading Iraq that is the sine qua non that created this mess in the first place. But being wrong on Iraq is not the neocons' only sin — merely their most germane.

A piece that Harvard international affairs professor Stephen Walt wrote during the 2008 election, "The Shattered Kristol Ball," caught Salon's attention because it takes the argument considerably further, and thus gives a much more comprehensive picture. It's not just Iraq that neocons were wrong about, Walt indicated, it's everything — even their supposed triumph the “surge," he noted. Walt argues that their failure is rooted in a worldview divorced from reality. He further clarified this argument by discussing the strengths of the alternative, foreign policy realism, the dominant U.S. foreign policy worldview since World War II.

Salon contacted Walt to ask him to reflect and expand on the themes he struck in that piece — themes that have been getting far too little attention since ISIS emerged as a serious military threat in Iraq. The following is an edited transcript of our interview.

I'd like to start small, with specifics, and build up to the big picture. Neocons tried to use the “surge" to vindicate all their earlier failures in Iraq, and even today, some may think it strange to say that the “surge" failed. Yet, you wrote that it had failed all the way back in September 2008, and Obama's failure to realize this was arguably instrumental in his decision to expand the war in Afghanistan.

So, three questions to begin with. First, why did you say the “surge" failed in 2008?

The “surge” had two explicit objectives: 1) reduce the level of violence, and 2) enable political reconciliation among competing Iraqi groups. The first goal was merely tactical; the second goal was the real prize. It has been clear for some time that this second, more important goal was never achieved. Ergo, the "surge" failed.

Second, what problems have resulted from failing to realize this?

I see two problems. First, it made some Americans more confident that we could repeat the surge's alleged successes in Afghanistan, which paved the way for Obama's decision to escalate that war in 2009. Second, it fooled some people into thinking that the U.S. could have "finished the job" in Iraq if it had just been willing to stay there longer.

Third, what does this tell us about the broader failings of the neoconservatives?

It reminds us that their track record as policy analysts and forecasters is abysmal; they've been wrong about almost every important strategic choice since 9/11 (if not before). It also reveals that their basic worldview is flawed, and that they've never been willing to rethink it, despite all the evidence against them.

Another neocon failure you mentioned in that piece is North Korea, the one country where the WMD threat was not just smoke and mirrors. The U.S. was actually getting close to a possible nuclear deal toward the end of Clinton's presidency, but things fell apart fairly quickly under Bush, and only began to get better once the neocon influence began to wane. How did the neocons make our North Korea problem worse?

Dealing with North Korea is never easy, but the neocons believed the only way to handle Pyongyang was with threats and bluster and name-calling. The result was North Korea's decision to leave the Non-Proliferation Treaty and eventually test a bomb. The Bush administration's obsession with Iraq helped too, as they just weren't paying close attention to North Korea and were in no position to do anything once Pyongyang decided to restart its nuclear weapons program.

How consequential was that?

It depends on whether you think nuclear deterrence is very stable or not. If you have lots of confidence in deterrence, North Korea's bomb doesn't make much difference, except to make it impossible for the U.S. to use force to do regime change there. If you are more worried about North Korea's unpredictable and often aggressive behavior, then their possession of a small nuclear arsenal is not good news at all.

You also discuss how the neocons have made things worse for Israel, despite all their militant rhetoric to the contrary. What should people keep in mind regarding the actual fruits of neocon policy and its impact on Israel's well-being?

Israel's long-term future as a democracy depends on achieving a two-state solution with the Palestinians and decent relations with its neighbors. By encouraging the U.S. to back Israel no matter what it does, and by supporting hard-line responses by Israel's government, the neocons have helped derail the two-state solution. This will probably lead to one state, which will be an apartheid state. But that will not be sustainable over the longer term. No genuine friend of Israel could be happy with that outcome.

You contrast the neocons' record of failure with the realists' record of success preceding them, particularly as the dominant foreign policy outlook guiding us during the Cold War period. You briefly encapsulated the differences between these two views as follows:

Where realists see a world of states with both competing and intersecting interests, neoconservatives see a stark clash between virtuous, peace-loving democracies and aggressive, evil dictatorships.

How did the realist outlook enable us to win the Cold War?

It made it possible for the United States to recruit a wide and diverse array of allies around the world, which meant that international communism was outnumbered and outproduced and unable to make significant gains.

What sort of tragic missteps did we avoid that neoconservatives would have likely gotten us into?

The United States made significant mistakes during the Cold War as well — most notably in Indochina — but for the most part it focused on critical regions such as Europe, Asia and the Persian Gulf and did not squander vast resources in places that did not matter.

One point you make is that Ronald Reagan was predominantly a foreign policy realist in his actions, though he did enjoy indulging in black-and-white neocon rhetoric. What are some examples you'd cite to bolster this point?

First of all, Reagan cut deals with countries like the former Soviet Union, when it was in the U.S. interest to do so. He also supported alliances with non-democracies such as Egypt and Saudi Arabia, and withdrew U.S. forces from Lebanon when it was clear that remaining there would be costly and counterproductive. In short, he was more flexible than he is sometimes given credit for.

It strikes me that realists in rival countries can work together, based on shared perceptions of shared interests, while agreeing to set aside areas of conflict, whereas neocon-style thinkers in rival countries will tend to empower each other politically by playing the devil in each other's fantasies -- and in this sense they're actually political allies, though they'd never admit to it. What do you think of that notion?

Sounds right to me. Neocons have a very black-and-white view of the world, and diplomatic flexibility is not something they are known for.

With all this in mind, what sort of opportunities are realists likely to see in dealing with ISIS, and the broader set of problems it's part of, which neocons are ideologically incapable of seeing?

The key difference here is that realists understand that continuing to interfere in the Arab and Islamic world — and especially to do this with military force — is going to generate more and more hostility and opposition. The United States should reduce its footprint in that part of the world and let local actors address these problems. Washington should also work harder to rebuild relations with countries such as Iran, because we have some shared interests and because that would increase our overall diplomatic leverage.

What sorts of self-defeating moves are neocons likely to push for that the U.S. should resist no matter what?

The main danger I see is a war with Iran, which they will push for if there is no agreement over Iran's nuclear program.

Looking forward, beyond the immediate challenges such as ISIS, how would you describe the difference between the realist vision of America's future and the neocon vision?

Realists believe the United States is very secure, and that it tends to get into trouble when it tries to export democracy at the point of a gun and force other states to adopt our political values and principles. Neoconservatives think U.S. security is precarious but that spreading democracy with military force is easy and cheap. Needless to say, the past decade demonstrates how foolish their ideas really are.

What are the greatest dangers the neocon vision holds?

Endless wars that do not spread liberty abroad and eventually compromise liberty here at home.

What are the greatest opportunities the realists can realize that the neocons cannot?

A realist strategy would make the U.S. more popular, reduce the military burden, get other states to do more, and allow the United States to address pressing domestic problems. The only groups that would suffer from this approach would be defense contractors and special interest groups that are powerfully committed to endless U.S. global activism.

A final question. One of the neocons' favorite epithets for dismissing their critics is calling them "naive." But the definition of naive is, roughly, someone who shows a lack of experience, wisdom or judgment. The neocons' implication is that anyone who "trusts" "evildoers" must be naive. They don't. Ergo they alone are uniquely not naive, and are uniquely in a place to judge others.

But, of course, the historical record shows that they're the naive ones -- the ones lacking wisdom and judgment, for whom no amount of experience leaves them any wiser for the next go-round. In short, when they call others "naive," the neocons have a bad case of projection. Does this seem like an accurate criticism of their penchant for calling others "naive"?

Yes, absolutely. A remarkable feature of the neoconservative phenomenon is their unwillingness to acknowledge past errors or admit responsibility for the flawed policies they previously endorsed.