From Joan Rivers to "Opie and Anthony," comics on the defensive are a sad sight

When celebrities fly off the handle in the guise of comedy, it's time for fans to stop invoking the First Amendment 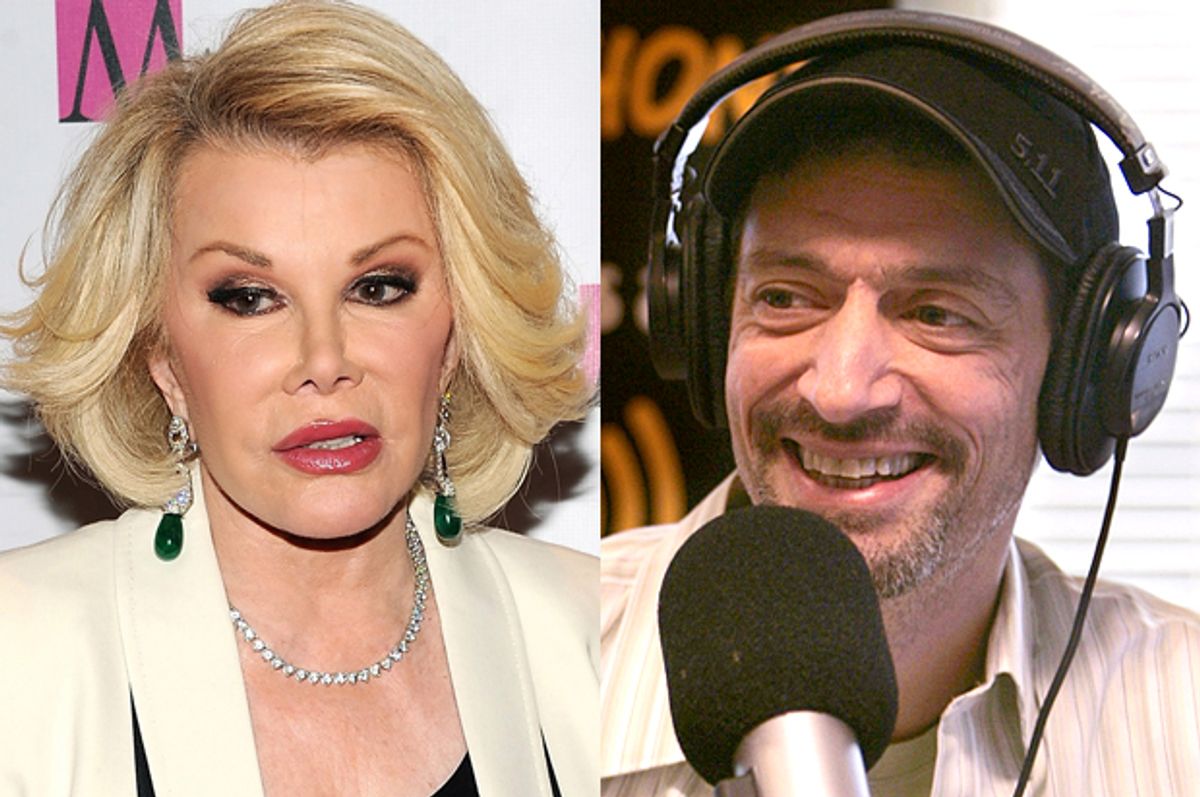 After the firing of Anthony Cumia from Sirius XM radio following an unhinged racist rant (and a history of ugly statements), Cumia's fans have risen to his defense, treating Cumia's right to speak in disgusting invectives against nonwhite people as a fundamental right. Among the saddest attempts was a post on Deadline, which tied Cumia's firing to the July 4 holiday: "But on a day meant to commemorate freedom, including speech, do angry words justify ending someone’s livelihood?"

Of course, no one is actually violating Cumia's civil rights. He has faced no legal consequences brought by the government on the basis of calling black people "savages" and "animals," the sort of consequences the First Amendment protects against. He simply lost his job, after those offended by Cumia -- including what we can presume were voices within Sirius -- spoke up. The obvious consequence of the right to free speech is the responsibility to deal with the consequences.

But we're dealing here with a comedian (of sorts), and comedy is treated by its practitioners as a protected class of speech. Because comedy is intended at times to get at harder truths via provocation, comedians tend to bristle at any suggestion that a person might be earnestly offended by their jokes. Jim Norton, a comedian who has devoted his platform to arguing that jokes about rape should not offend anyone, has implied that Cumia has been "silenced," as though a corporation deciding on its own that an individual's statements made him a less-than-ideal employee constituted some chilling overreach. Cumia can still say whatever he wants on Twitter or during shows, but the fact he's deleted his tweets calling a black woman a "savage" would seem to indicate he has some clue that explicit racism isn't a great look.

It's the same phenomenon that happened over the weekend with Joan Rivers: Tired of getting asked fairly straightforward questions about whether she uses humor that's "mean," Rivers walked out of a CNN interview. But Rivers wasn't being accused of anything particularly shocking; the comedian's humor has for many years straightforwardly hinged on calling celebrities fat, drunk, ugly, stupid, or poorly dressed. It's hardly shocking that someone might suggest that Rivers uses meanness in her comedy, but Rivers, of course, chose to position her interviewer as an enemy of comedy, saying, "You are not the one to interview a person who does humor!"

Rivers, like the far more offensive Cumia, wants to be able to say whatever she wants whenever she wants, free from blowback or criticism -- a gambit as old as time.

But jokes aren't a secret language no non-comic can possibly crack; it's a fair observation that Rivers is pretty mean. The mere fact that a comic is using humor doesn't exempt the humor from being examined. And sometimes, the line between insult comedy and plain, on-the-nose insult is clear enough to everyone but the comics.