A Pottermore update on an older Harry, courtesy of Rita Skeeter 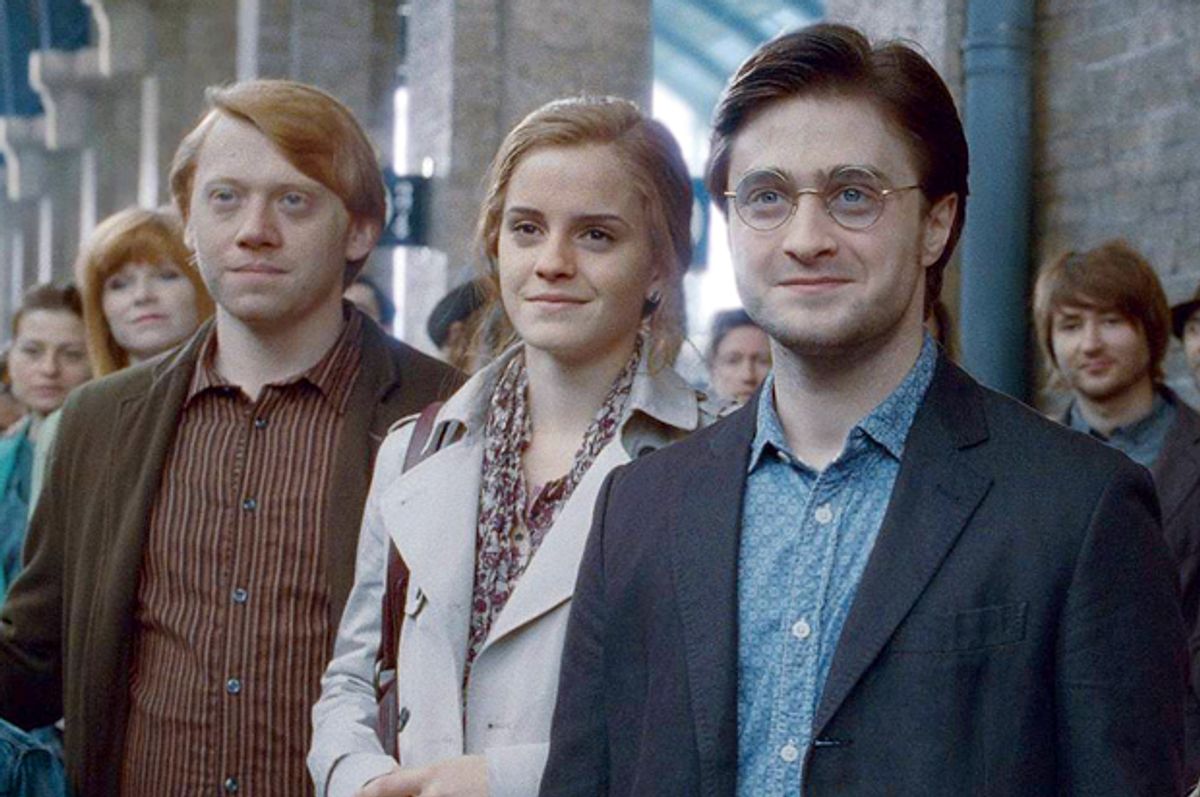 Rupert Grint, Emma Watson, and Daniel Radcliffe in the epilogue scene of "Harry Potter and the Deathly Hallows: Part 2"
--

As every Muggle knows, Harry Potter celebrates a birthday this month. But on the cusp of turning 34, he's given his fans a gift – a peek into what his life is like these days, thanks to the Daily Prophet – and his creator, J.K. Rowling.

In a surprise appearance that brings readers up to date on the now approaching-middle-age character -- along with the other key members of the famed Dumbledore's Army – Harry and his friends and family show up for the final of the 2014 Quidditch World Cup. And they're a long way from the faraway view in the stands they once had.

For Rowling's 1,500-word new story, which appeared early Tuesday on Rowling's Pottermore site, the author delivers the first update on Harry and company since the final Potter novel released seven years ago. It's an intriguing view of what her characters have been up to, written in the unmistakably snarky voice of gossip columnist Rita Skeeter, the Perez Hilton of the wizarding world. Like a HuffPo story on the cast of "Saved by the Bell," Skeeter's story notes that the Hogwarts alums are "no longer the fresh-faced teenagers they were in their heyday" – Harry's hair is now flecked with "a couple of threads of silver," while Ron's "famous ginger hair appears to be thinning slightly." More portentously, Harry is now sporting "a nasty cut over his right cheekbone," leading Skeeter to speculate that perhaps the Ministry of Magic's most famous Auror is "embroiled in fresh mysteries that will one day explode upon us all." His wife, Ginny, meanwhile, is busy reporting on the games themselves, to the obvious consternation of Skeeter.

Rowling-as-Skeeter further reveals that after a brief stint at the Ministry of Magic, Ron left to become co-manager of Weasleys' Wizard Wheezes with his brother George, while Hermione remains a rising star at the Ministry. And because she's also a mother of two, Skeeter can't help wondering, "Does Hermione Granger prove that a witch really can have it all? (No – look at her hair.)" There are also updates on Neville and Luna, as well as the next generation of young wizards -- though readers will remember that the scandal-hungry Ms. Skeeter can be a most unreliable narrator.

Rowling's peek into the current lives of her beloved characters is a charming little summertime treat – a fresh slice of wit and satire on a hot day that proves the author hasn't lost her deft touch around the enchanting world she created. And it's certainly a tantalizing hint that she's dreaming up more adventures not just for Harry but for the younger Weasleys and Potters and Lupins. But it's also a pretty brilliant parody of celebrity culture and the relentlessness of tabloid journalism, with its endless obsession with who's looking old and who's possibly showing "cracks" in their relationships and which working mothers are incorrectly leaning in. And though Harry and his cohorts managed to defeat Voldemort himself, Rowling's latest will leave you wondering how they'd hold up against TMZ.