They're huge and ruthless and define our lives. They're close to monopolies. Let's make them public utilities 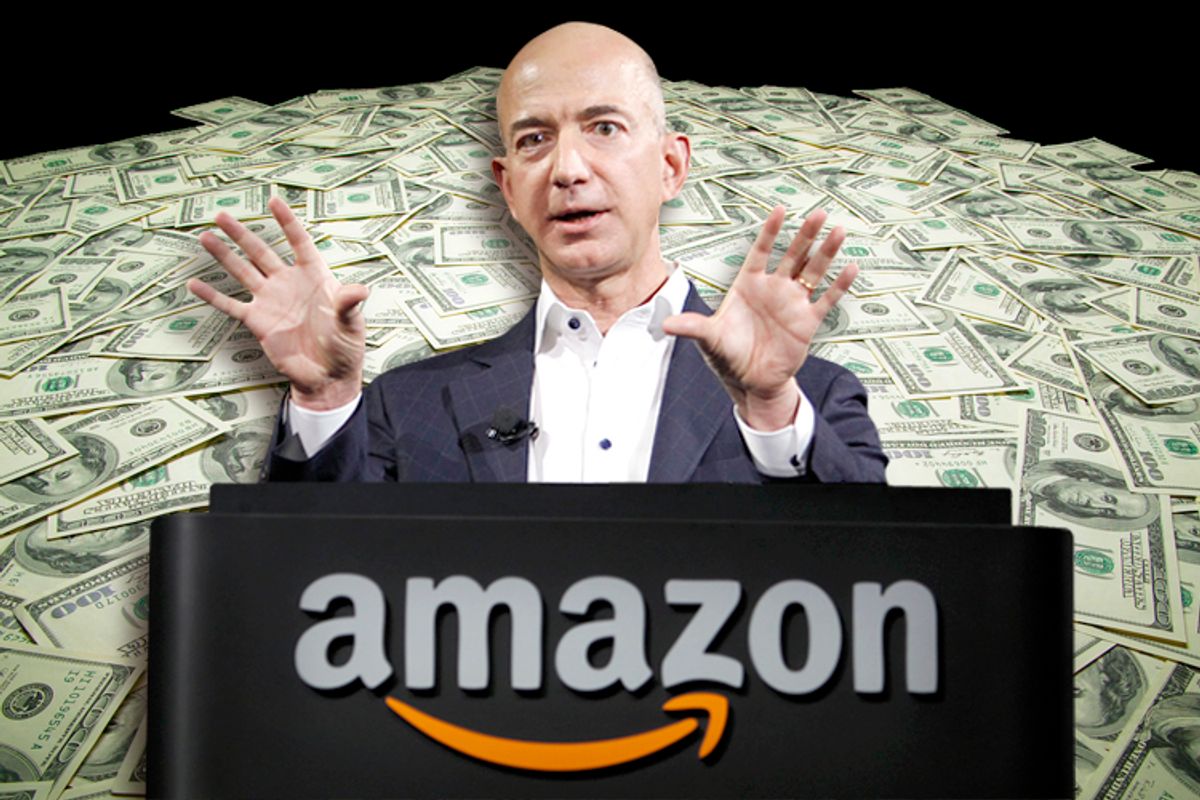 They’re huge, they’re ruthless, and they touch every aspect of our daily lives. Corporations like Amazon and Google keep expanding their reach and their power. Despite a history of abuses, so far the Justice Department has declined to take antitrust actions against them. But there’s another solution.

Is it time to manage and regulate these companies as public utilities?

That argument’s already been made about broadband access. In her book “Captive Justice,” law professor Susan Crawford argues that “high-speed wired Internet access is as basic to innovation, economic growth, social communication, and the country’s competitiveness as electricity was a century ago.”

Broadband as a public utility? If not for corporate corruption of our political process, that would seem like an obvious solution. Instead, our nation’s wireless access is the slowest and costliest in the world.

The Big Tech mega-corporations have developed what Al Gore calls the “Stalker Economy,” manipulating and monitoring as they go. But consider: They were created with publicly funded technologies, and prospered as the result of indulgent policies and lax oversight. They’ve achieved monopoly or near-monopoly status, are spying on us to an extent that’s unprecedented in human history, and have the potential to alter each and every one of our economic, political, social and cultural transactions.

In fact, they’re already doing it.

No matter how they spin it, these corporations were not created in garages or by inventive entrepreneurs. The core technology behind them is the Internet, a publicly funded platform for which they pay no users’ fee. In fact, they do everything they can to avoid paying their taxes.

Big Tech’s use of public technology means that it operates in a technological “commons,” which they are using solely for its own gain, without regard for the public interest. Meanwhile the United States government devotes considerable taxpayer resource to protecting them – from patent infringement, cyberterrorism and other external threats.

Big Tech’s services have become a necessity in modern society.

Businesses would be unable to participate in modern society without access to the services companies like Amazon, Google and Facebook provide. These services have become public marketplaces.

For individuals, these entities have become the public square where social interactions take place, as well as the marketplace where they purchase goods.

They’re at or near monopoly status – and moving fast.

Google has 80 percent of the search market in the United States, and an even larger share of key overseas markets. Google’s browsers have now surpassed Microsoft’s in usage across all devices. It has monopoly-like influence over online news, as William Baker noted in the Nation. Its YouTube subsidiary dominates the U.S. online-video market, with nearly double the views of its closest competitor. (Roughly 83 percent of the Americans who watched a video online in April went to YouTube.)

Even Microsoft’s Steve Ballmer argued that Google is a “monopoly” whose activities were “worthy of discussion with competition authority.” He should know.

As a social platform, Facebook has no real competitors. Amazon’s book business dominates the market. E-books are now 30 percent of the total book market, and its Kindle e-books account for 65 percent of e-book sales.  Nearly one book in five is an Amazon product – and that’s not counting Amazon’s sales of physical books. It has become such a behemoth that it is able to command discounts of more than 50 percent from major publishers like Random House.

They abuse their power.

The bluntness with which Big Tech firms abuse their monopoly power is striking. Google has said that it will soon begin blocking YouTube videos from popular artists like Radiohead and Adele unless independent record labels sign deals with its upcoming music streaming service (at what are presumably disadvantageous rates).   Amazon’s war on publishers like Hachette is another sign of Big Tech arrogance.

But what is equally striking about these moves is the corporations’ disregard for basic customer service. Because YouTube’s dominance of the video market is so large, Google is confident that even frustrated music fans have nowhere to go. Amazon is so confident of its dominance that it retaliated against Hachette by removing order buttons when a Hachette book came up (which users must find maddening) and lied about the availability of Hachette books when a customer attempts to order one. It also altered its search process for recommendations to freeze out Hachette books and direct users to non-Hachette authors.

Amazon even suggested its customers use other vendors if they’re unhappy, a move that my Salon colleague Andrew Leonard described as “nothing short of amazing – and troubling.”

David Stratfield of the New York Times asked, “When does discouragement become misrepresentation?” One logical answer: When you tell customers a product isn’t available, even though it is, or rig your sales mechanism to prevent customers from choosing the item they want.

And now Amazon’s using some of the same tactics against Warner Home Video.

They got there with our help.

As we’ve already noted, Internet companies are using taxpayer-funded technology to make billions of dollars from the taxpayers – without paying a licensing fee. As we reported earlier, Amazon was the beneficiary of tax exemptions that allowed it to reach its current monopolistic size.

Google and the other technology companies have also benefited from tax policies and other forms of government indulgence. Contrary to popular misconception, Big Tech corporations aren’t solely the products of ingenuity and grit. Each has received, and continues to receive, a lot of government largess.

The real “commodity” is us.

Most of Big Tech’s revenues come from the use of our personal information in its advertising business. Social media entries, Web-surfing patterns, purchases, even our private and personal communications add value to these corporations. They don’t make money by selling us a product. We are the product, and we are sold to third parties for profit.

Public utilities are often created when the resource being consumed isn’t a “commodity” in the traditional sense. “We” aren’t an ordinary resource. Like air and water, the value of our information is something that should be publicly shared – or, at a minimum, publicly managed.

Facebook tracks your visits to the website of any corporate Facebook “partner,” stores that information, and uses it to track and manipulate the ads you see. Its mobile app also has a new, “creepy” feature that turns on your phone’s microphone, analyzes what you’re listening to or watching, and is capable of posting updates to your status like “Listening to Albert King” or “Watching 'Orphan Black.'”

Google tracks your search activity, an activity with a number of disturbing implications. (A competing browser that does not track searches called DuckDuckGo offers an illustrated guide to its competitors’ practices.)  If you use its Chrome browser, Google tracks your website visits too (unless you’re in “private” mode.)

Yasha Levine, who is tracking corporate data spying in his “Surveillance Valley” series, notes that “True end-to-end encryption would make our data inaccessible to Google, and grind its intel extraction apparatus to a screeching halt.” As the ACLU’s Christopher Soghoian points out: “It’s very, very difficult to deploy privacy protective policies with the current business model of ad supported services.”

Given its recent hardball tactics, here’s a little-known development that should concern more people: Amazon also hosts 37 percent of the nation’s cloud computing services, which means it has access to the inner workings of the software that runs all sorts of businesses – including ones that handle your personal data.

For all its protestations, Microsoft is no different when it comes to privacy. The camera and microphone on its Xbox One devices were initially designed to be left on at all times, and it refused to change that policy until purchasers protested.

Privacy, like water or energy, is a public resource. As the Snowden revelations have taught us, all such resources are at constant risk of government abuse.  The Supreme Court just banned warrantless searches of smartphones – by law enforcement. Will we be granted similar protections from Big Tech corporations?

Freedom of information is at risk.

Google tracks your activity and customizes search results, a process that can filter or distort your perception of the world around you.  What’s more, this “personalized search results” feature leads you back to information sources you’ve used before, which potentially narrows our ability to discover new perspectives or resources.  Over time this creates an increasingly narrow view of the world.

What’s more, Google’s shopping tools have begun using “paid inclusion,” a pay-for-play search feature it once condemned as “evil.” Its response is to say it prefers not to call this practice “paid inclusion,” even though its practices appear to meet the Federal Trade Commission’s definition of the term.

As for Amazon, it has even manipulated its recommendation searches in order to retaliate against other businesses, as we’ll see in the next section.

The free market could become even less free.

Could Big Tech and its data be used to set user-specific pricing, based on what is known about an individual’s willingness to pay more for the same product? Benjamin Schiller of Brandeis University wrote a working paper last year that showed how Netflix could do exactly that. Grocery stores and other retailers are already implementing technology that offers different pricing to different shoppers based on their data profile.

For its part, Amazon is introducing a phone that will also tag the items around you, as well as the music and programs you hear, for you to purchase – from Amazon, of course. Who will be purchasing the data those phones collect about you?

They could hijack the future.

The power and knowledge they have accumulated is frightening. But the Big Tech corporations are just getting started. Google has photographically mapped the entire world. It intends to put the world’s books into a privately owned online library. It's launching balloons around the globe that will bring Internet access to remote areas – on its terms. It’s attempting to create artificial intelligence and extend the human lifespan.

Amazon hopes to deliver its products by drone within the next few years, an idea that would seem preposterous if not for its undeniable lobbying clout. Each of these Big Tech corporations has the ability to filter – and alter – our very perceptions of the world around us. And each of them has already shown a willingness to abuse it for their own ends.

These aren’t just the portraits of futuristic corporations that have become drunk on unchecked power. It’s a sign that things are likely to get worse – perhaps a lot worse – unless something is done. The solution may lie with an old concept. It may be time to declare Big Tech a public utility.