“This is what happens when a woman gets fed up and locks the door on me," Thicke told the crowd 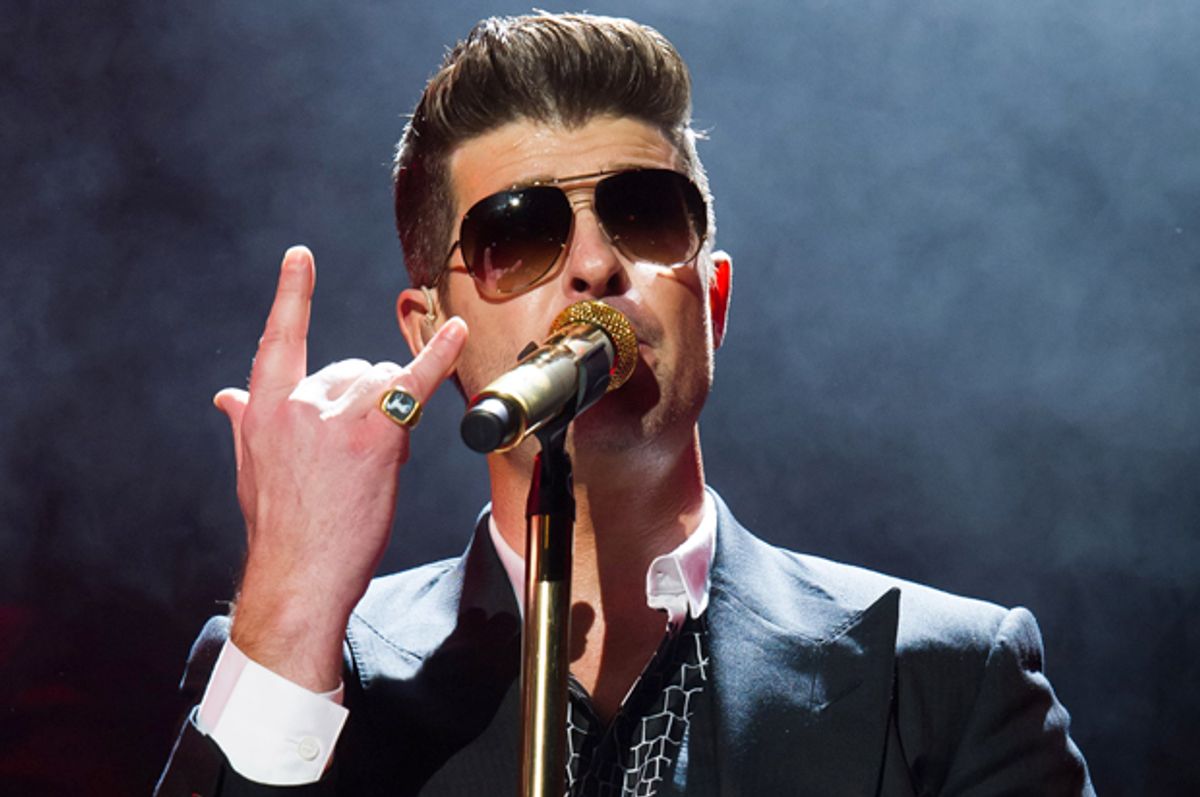 It’s awkward being a middle-aged pop ladies’ man. You can no longer project the carefree randiness of your youth, and you’ve yet to earn the knowing charm of your later years; what’s more, you’ve got baggage. Rarely has there been a pop midlife crisis as spectacular as Robin Thicke’s: that very public separation from his wife, Paula Patton, followed by that extraordinarily bald post-breakup album ("Paula"), and a weepy promotional campaign from a seemingly broken man.

While it’s all very well to interrupt a sensitive piano ballad on BET for a quiet cry -- as Thicke recently did -- this sort of thing won’t fly in the celebratory atmosphere of a music festival. So as a crowd huddled in a tent on a drizzly Sunday last weekend at London’s Wireless Festival to hear one of Thicke’s first post-“Paula” sets, one question hung in the air: How on earth was he going to pull this off?

“All my ladies scream!” an announcer bellowed as Thicke bounded onstage in a figure-hugging, shiny suit while his 10-piece band burst into last year’s single “Give It 2 U.” “Big hits for ya / Big dick for ya,” he promised, clutching his crotch. For the moment, Paula was forgotten – and “Paula” too.

Thicke’s album, the subject of much derision from critics and on social media, finds the pickup artist of yore trying to rekindle monogamy, yet still trying to sell his skills in the sack: “When you come back we’ll have so much fun / With your new nails on my back,” he croons on “Love Can Grow Back.” Alas, save for a few scattered peppy tracks, he has pared down the carefree funk that characterized “Blurred Lines” in favor of a sparseness that fits him like a hair shirt. He’s making a show of not allowing himself to have fun.

Denying gig-goers fun is a cardinal sin, though, as Kanye West found out the night before when he interrupted a storming headlining set to rant for a good 15 minutes about his trouble with the limelight and a current lawsuit, asking the bemused crowd, “Have any of y’all ever had to give a deposition?” and arguing that even celebrities need a day off and that paparazzi should just LEAVE KANYE ALONE. Having paid 70UKP (around $120 U.S.) a head for the privilege of seeing Kanye substitute for the incapacitated Drake, the crowd responded with widespread boos, chants of “We want Drake,” and walkouts. But Kanye, being Kanye, could still rescue his set by circling back to his hits. With one (mega) hit to his name, Thicke has to be more judicious.

His opening gambit was to work his ass off. Slinky horns, synchronized dance moves, and juddering percussion lifted the high-energy “Magic” (a 2008 co-write with Patton, sample lyric “I can erase the past”) and “Take It Easy on Me” from “Blurred Lines” (“I want to shop for your underwear”), as he prowled the stage, “slicked back” the stubble on his new grade 1 haircut, and wiped sweat into black towels that he flung into the worked-up crowd. You’ve got to give it 2 him –Thicke can be a top-class entertainer.

Six songs in, he even made a smooth transition into pleading mode. On “Too Little Too Late,” the “Paula” track that best sits with “Blurred Lines,” he let rip with a “p-p-p-p-p-pl-eeeeease!” worthy of Porky Pig to set off salsa rhythms and rippling bass, and by the end of the tune he was, in fact, down on his knees.

From here, things got uncomfortable. “My new album is dedicated to my lady – we recently separated,” he remarked, to scattered approving screams from the predominantly female crowd. But when a slightly winded Thicke – “You lose your breath begging and pleading,” he explained – announced, “We’re going to play a couple new songs,” electric buzzing erupted onstage like the “Wrong answer!” sound on “Family Feud.” On “Love Can Grow Back,” the desperate balladeer, now stroking a grand piano, indulged in over-the-top melisma: “Sho-o-o-o-o-OW me our love!”

He prefaced “Lock the Door” by saying, “This is what happens when a woman gets fed up and locks the door on me,” as any dreams of a zipless hookup with the indefatigable lover of the opening songs started to turn sour. By the end of the uneasy, drumless number, Thicke was wiping more than sweat from his face: “I get a little emotional when I do that one.” The crowd talked over the single “Get Her Back,” a slinky lick in search of a song; some left even though the rain had picked up. Back on his knees, he was all raspy histrionics, before declaring with grim determination, “All right, now we’re going to dance!” From there, he made it to “Blurred Lines” in four moves, via 2009’s “Shakin’ It 4 Daddy,” Michael Jackson’s “Rock With You,” and Al Green’s “Let’s Stay Together,” a rather more fun advertisement for patching up a relationship.

Back in the ’70s, when artists might release more than one album per year, Thicke could have dropped a project like “Paula” without much fanfare to get something out of his system, and then moved on to more commercially palatable fare. But in an age when global stardom means global touring, and social media elevates an A-list artist’s every musical flub to the status of a feast, “Paula’s" songs must be trotted out and performed even as they’re parsed to death. And where Thicke had claimed he was singing in pervy character on a song like “Blurred Lines,” “Paula’s" overt (if sometimes unconvincing) critique of such priapism, cast as a critique of Thicke himself, skewers the very work that made him a star. So where to now? Maybe he could embrace the inner darkness he finds on “Paula’s" “Something Bad,” or else call up “Blurred Lines” collaborator Pharrell Williams for lessons in how to transition into a mega-selling, family-friendly middle-aged pop star.