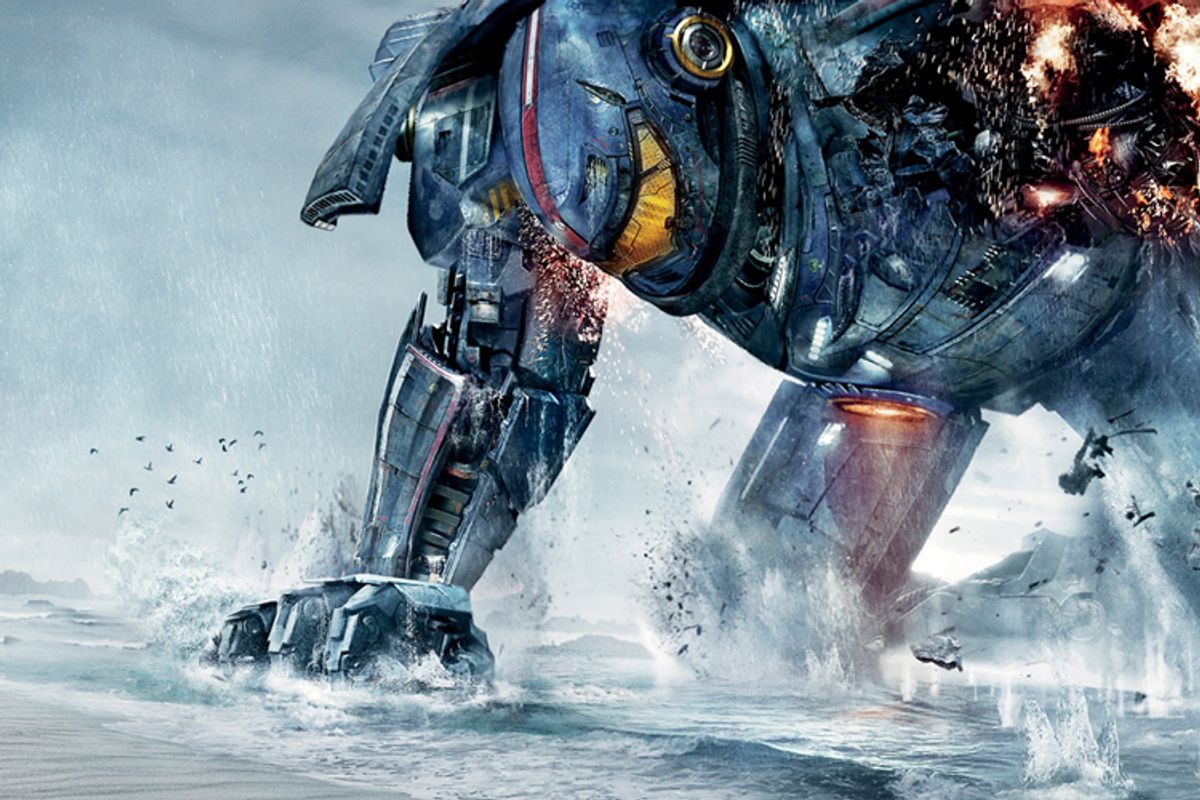 Pacific Rim seems like a pretty simple film, and honestly, it is. Giant robots fighting alien monsters doesn’t need to be complicated.

What most people don’t know is that there’s a ton of Pacific Rim backstory and worldbuilding that didn’t make it into the final film. Director Guillermo del Toro is known for putting a great deal of love into the worldbuilding for his movies, which in the case of Pacific Rim included a whole cast of side-characters and a notebook full of concept art and background details.

In an interview with the Wall Street Journal, del Toro hinted at what might show up in the Pacific Rim sequel, animated series, and comicbooks.

“The [animated] series tackles the stories that happened to pilots working in the Shatterdome, but also cadets learning how to become pilots. All of this happens prior to the first movie, and it gives you a little more depth into the background of certain characters that will appear in the second movie.”

Del Toro has said before that he isn’t interested in making a feature-length prequel about the earlier, Godzilla-style attacks from Pacific Rim’s Kaiju, because the whole point of the original story is that it takes place long after the “apocalypse” had begun. Rather than being a post-apocalyptic dystopia or an Armageddon-style movie about saving the world, it’s a story about people who have already been experiencing a worldwide disaster for years.

Using the animated series to provide some backstory sounds like an ideal choice. Most viewers will already be familiar with the setting, but there’s no pressure for it to follow a traditional monster-movie plot. After all, we already know that in the years prior to the events of Pacific Rim, all attempts to defeat the Kaiju obviously failed.

As for the idea of an ongoing comic series, del Toro was inspired by the success of the first film’s tie-in comic, “Tales from Year Zero,” which included appearances from several of the film’s main characters.

“By the time the second movie comes out, you will have probably one year of the animation airing, and you will have three years of the comic book series ongoing, so we are trying for all these things to be canon, to be in the same universe… a lot of kids, for example, have discovered Pacific Rim through the toys. They come in through the toys, and then they watch the movie, so we’re trying to make it canon so we can expand the universe. And by the time we come into the second movie, you have a good feel for the world, and we can dedicate ourselves to character and ideas and spectacle.”

It’s interesting to see how del Toro is purposefully aiming for this kind of expanded universe. When the first Pacific Rim movie came out, many critics pointed out how unusual it was to see a blockbuster sci-fi film of this size that wasn’t part of a pre-existing franchise like Transformers, Avengers, and so on. Pacific Rim may be kind of derivative, taking inspiration from iconic disaster movies and mecha anime, but it’s still very much an original film in the sense that the entire cast and setting had to be introduced to new audiences. Amazingly, this was still perceived as something of a gamble for this kind of big-budget Hollywood action movie.

Luckily, this combination of familiar blockbuster tropes and a brand new cast of characters meant that Pacific Rim was easy enough to understand, but could be innovative in ways that things like Star Trek never seem to manage. Del Toro set out give the film a relatable female lead, and Pacific Rim went on to be praised for having a far more diverse international cast than most other movies of the genre.

In this week’s WSJ interview, he touched on how this will still be a major part of the sequel, saying, “I’m hoping to bring the same idea I had in the first movie, that was to make it multicultural and humanistic as much as possible, to make characters from many nationalities or gender, to make them equal in the scope of the adventure. So, we’re bringing a few characters that are new and hopefully doing good work managing those that survived the first movie.”

The animated series and comic books will presumably continue to explore this theme, since Pacific Rim co-writer Travis Beacham has already shared plenty of details that didn’t make it into the first film, such as the fact that some characters in Pacific Rim canon from the LGBT community.

Beacham also mentioned that there are at least two all-female Jaeger teams, and told fans that the character Hermann Gottlieb is married to a woman named Vanessa. Vanessa Gottlieb is an interesting example because Beacham only described her on Tumblr as “a model” and “mixed race,” and Pacific Rim fandom basically took these two characteristics and ran with them. Despite never actually appearing in the film, she’s appeared in plenty of fanfics, and a popular fan theory is that she’s actually a prosthetics model.

Considering the level of interest Pacific Rim has already inspired, it’s no wonder that Guillermo del Toro wants to court this kind of fandom audience. With Hollywood franchises like Transformers having a near-symbiotic relationships with their tie-in products and expanded media universe, it only makes sense for Pacific Rim to try and get in on the action.