Is there a "trend" of children being left in hot cars?

A deluge of stories in just the past week suggests an epidemic of neglect -- but is it true? 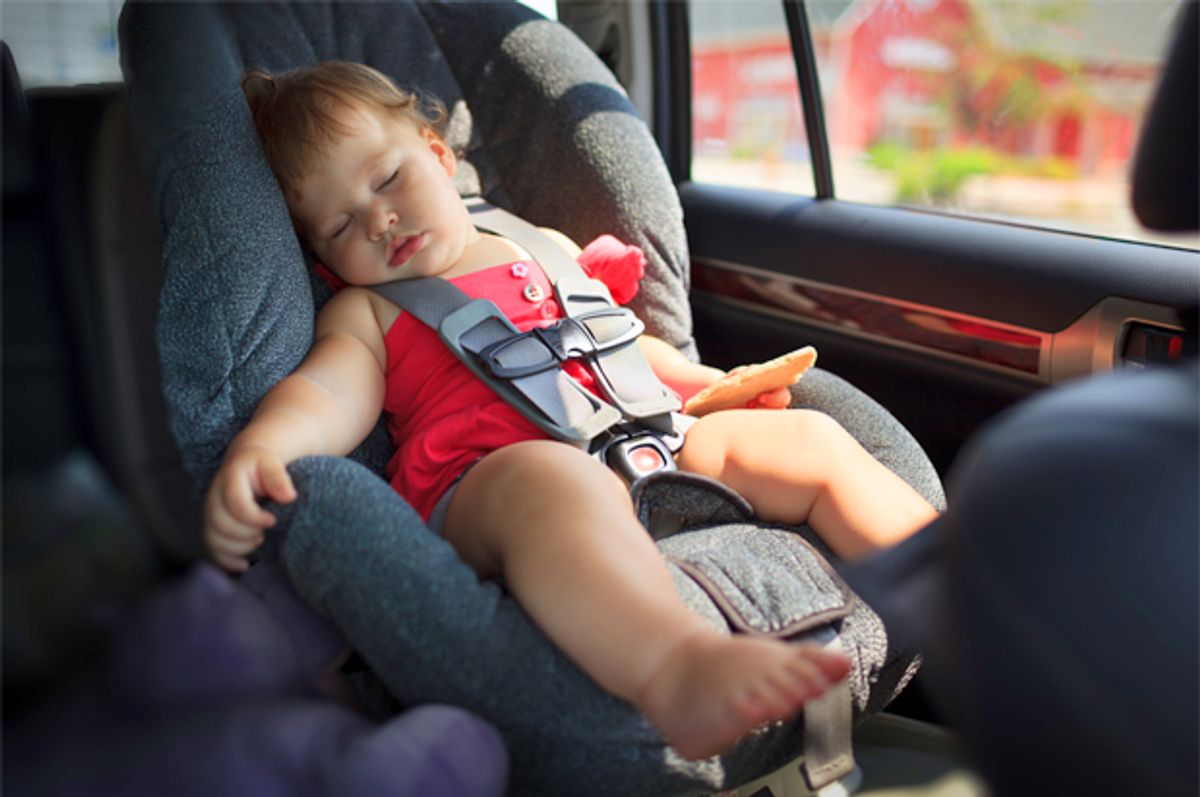 Believe it or not, we are not in the throes of a harrowing spike in summertime child neglect. Why, then, are we seeing a near daily deluge of stories involving very young children in peril, sometimes with fatal consequences?

This week alone, a 25-year-old Nassau County, Florida, mother was charged with neglect after her toddler was treated for heat exhaustion after being left inside a hot car. After dropping her husband off at work, the mother allegedly brought her other two children back home and went back to bed, forgetting her 18-month-old son in the back seat. In Connecticut on Monday, a 15-month-old boy died after being left alone in a car for an "extended period of time." In South Dakota, a couple was charged with abuse or neglecting a minor after they left their 7-year-old, 5-year-old and 8-month-old daughters alone while they gambled at a nearby casino. Police found meth in the father's pants pockets. And on Sunday, a Jacksonville mother was arrested for leaving her 5-year-old daughter in a hot car while she shopped at Costco. John Harrell, of the Department of Children and Families, told First Coast News at the time, "It's very concerning because this is an increasing trend." Combine all of that with the story this week of the mother who left her 7-month-old daughter on the Columbus Circle subway platform, and you'd be left thinking we were, as Mr. Harrell put it, facing a disturbing "trend" of neglect and abandonment.

Yet a USA Today story this week notes that the number of children who've died this year from overheating in cars is actually lower than it was this time in 2013. It's estimated that 38 children die each year from "vehicular heatstroke." So far in 2014 there have been 15. In 2010 there were 49. It's true, however, that young children are intensely vulnerable -- the USA Today story notes that "More than 70% of heatstroke deaths occur in children younger than age 2" and that a car "can heat up 20 degrees in ten minutes." That means that on even a pleasant day, a car can feel like an oven. And on a truly hot one, it can become a hell.

But if it feels like this has somehow become the summer of terrible things happening to very young children, it's likely because of one well-timed and chilling incident. When 22-month-old Cooper Mills Harris died in June after his father left him in a hot car, the mystery surrounding the death became a media sensation. At first, it appeared a case of a tragic mistake. The boy's father, Justin Ross Harris, claimed he had, in a terrible moment of distraction, forgotten to drop the child off at daycare and left him in his car seat as he went to work. Witnesses claim he was in obvious distress when he discovered the boy's lifeless body hours later. The story began to take an even darker turn, however, when reports began to surface that Harris had been doing Internet searches on how long it would take an animal to die in a hot car, that he had been allegedly sending sexually explicit messages to other women the day Cooper died, and that he and his wife had life insurance policies on the child. Harris is now charged with felony murder and second-degree child cruelty. In recent days the story has twisted again, as the investigation has begun to focus of Cooper's mother.

A case like the Harris one triggers all kinds of feelings in the public imagination. Initially, it can't help but incite the nightmare that many of us who've ever been new parents share: the fear of doing something – or not doing something – in a moment of supreme exhaustion and unintentionally hurting one's own child. And then it turns into a crime mystery, and the puzzle of whether a person would cold-bloodedly leave a defenseless toddler to die.

The subsequent barrage of similar stories has played upon the same emotions the Harris tale conjures – and the questions of how we parent. What's a regrettable split-second decision, like the one Kim Brooks wrote about for Salon last month? What's an unconscious mistake? And what's an unconscionable crime? When a 2-year-old wandered off in a Brooklyn park Saturday and drowned, the story prompted a predictable mix of sympathetic grief for the family and accusations of neglect.

We all turn our eyes away from our children at some point or another, and for most of us, the thought of what might happen in that space is our deepest fear. The comforting truth is that most of us do an OK job of protecting our offspring from harm. But the idea of what can happen has taken root in the public imagination, thanks largely to one heartbreaking death. If there's any good to come out of it, let's hope it comes in the form of greater awareness of the risks of leaving children unattended. Because we've already had enough stories this summer of what happens when a parent closes the door and walks away.