Armed residents are taking on the feared Zetas cartel in Tamaulipas state. One desperate town’s mayor applauds them 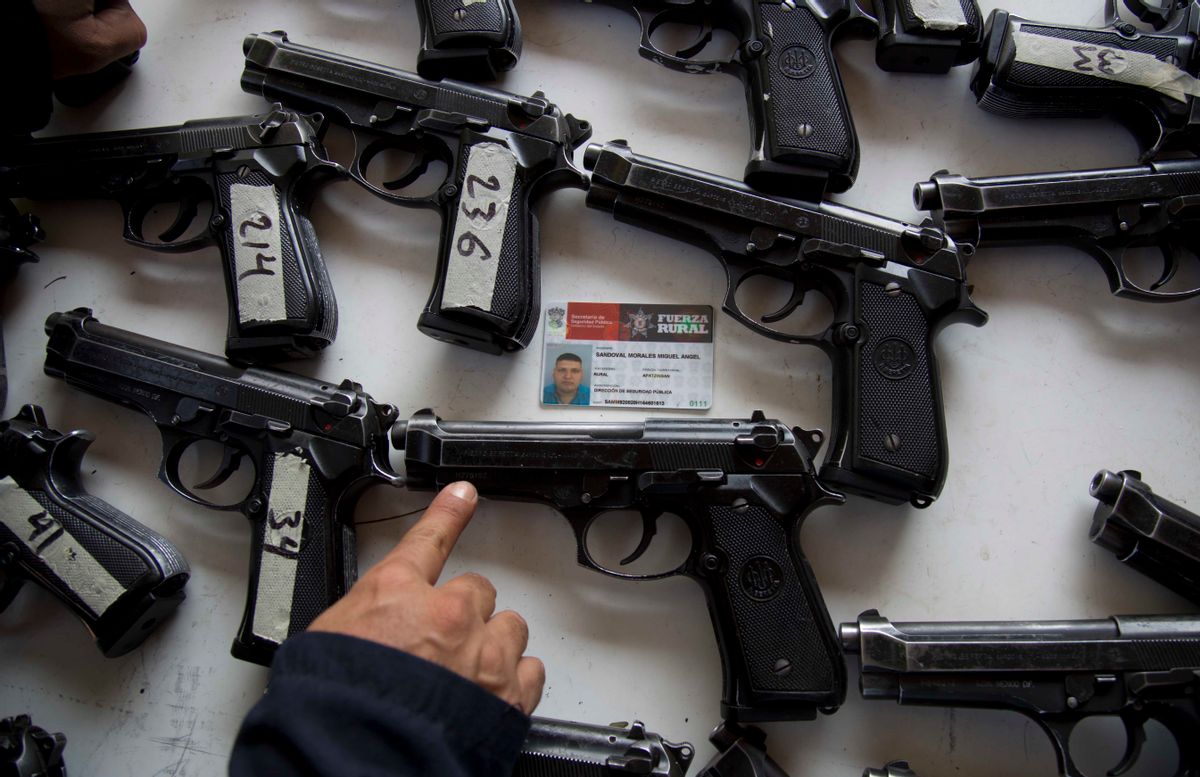 A federal police looks for the assigned weapon that corresponds to the rural police's identification card before the start of a ceremony in Tepalcatepec, Mexico, Saturday, May 10, 2014. (Associated Press)
--

HIDALGO, Mexico — The gunmen nabbed watermelon farmer Jesus Manuel Guerrero as he drove from his ranch to buy supplies and held him for five painful days in the trunk of a car.

When family members finally paid a $120,000 ransom and they released him, he was urinating blood.

He’s just one of hundreds of victims of a wave of kidnapping that’s swept this once peaceful farming town, about 130 miles south of Texas.

But almost three years after his brutal abduction, Guerrero, who is now the mayor, says his town has become safer, the kidnappers scared to enter.

This change is not due to the police, he says, but to a clandestine vigilante group known as the Pedro Mendez Column, named after a local general who fought the French in the 19th century.

The column hands out leaflets declaring it operates night patrols to defend the community from the feared Zetas cartel, which is behind most of the kidnapping. The vigilantes have also claimed responsibility for several murders of alleged Zeta members, including two men shot dead in January.

“The column only kills kidnappers and drug traffickers. They don’t allow extortion or threaten honest people,” Guerrero told GlobalPost, speaking in his town hall, which is decorated with paintings of Mexico’s independence and revolutionary heroes.

“It is much safer with them.”

This is the latest expression of a vigilante movement in Mexico that’s expanding from the southern mountains to areas near the United States border like Hidalgo, in Tamaulipas state.

The vigilantes are rising after the Mexican government failed to stop the country from becoming a world kidnap capital, with more than 1,600 reported abductions in 2013, the worst year on record. There have been more than 70,000 cartel-related killings since 2006.

But human rights groups warn that vigilantes may only add to Mexico’s cycle of violence — a severe problem in border states like Tamaulipas, which suffers shoot-outs that have caused temporary shutdowns of crossings into Texas.

Bordering the Rio Grande valley and the cities of Brownsville and Laredo, Tamaulipas lies along a major US-Mexico trade route, with tens of thousands of trucks of goods crossing daily, as well as many undocumented migrants and drug loads.

Farther south in the Pacific states of Michoacan and Guerrero, a vigilante movement mushroomed until thousands openly took up arms to fight cartels.

Some of those vigilantes were deputized as rural state police in May, but others have carried on operating outside the law. Last month, police and soldiers arrested Michoacan vigilante leader Jose Mireles and more than 70 of his supporters for carrying illegal guns.

Gun permits are difficult to get in Mexico, but the country is awash in illegal arms, many smuggled in from the US. The vigilantes favor the same Kalashnikovs and AR-15 rifles as the cartels, which sell on the black market here for several thousand dollars apiece.

The vigilantes in Tamaulipas are more secretive than those of the south, working in hidden cells from towns and ranches.

They conceal their identities because they not only fear arrest but also revenge attacks from the gangsters.

In May, alleged cartel gunmen shot and burned nine people at a ranch here in Hidalgo, accusing them of being linked to the vigilantes. Among the victims were two children.

“People of Hidalgo, don’t be involved with the column,” a note left by the bodies read. “The monster has woken up. This is the first test. Attentively: The Zetas.”

The murders took place in a hamlet away from the town center, which is harder for the vigilantes to defend, Mayor Guerrero says.

“It was a terrible, brutal scene. They killed the parents, the children. These are the kind of criminals we are dealing with,” he added.

The Pedro Mendez group first formed in 2010, but the mayor said it has grown substantially this year and now has hundreds of gun-owning affiliates.

“The criminals submit to blood and fire,” the Pedro Mendez declares in a leaflet it released in May. “The defense of our people has been long and gory, in permanent struggle and sustained combat against kidnappers.”

The column accuses some police officers of being in league with cartel members but says it supports the Mexican army and marines.

“Insecurity, violence and criminality are only solved by honest soldiers and an armed people,” the group says in the leaflet.

Web users claiming to be local vigilantes also participate on social media sites set up to discuss drug violence. In one January post, in which the vigilantes claim the killing of a Zetas cartel kidnapper, a user writes, “Excellent. That is the only way to finish the Z.”

There are also signs of these vigilantes spreading to other towns near the US border.

In the Tamaulipas state capital Ciudad Victoria, a leaflet recently appeared from a vigilante group calling itself the Alberto Carrera Torres brigade promising to fight the Zetas.

Federal prosecutors have accused some vigilantes across Mexico of being backed by drug cartels to fight rival gangs.

The Pedro Mendez may be receiving weapons to fight the Zetas from that gang’s enemies in the Gulf Cartel, Guerrero says. But the mayor insists the vigilantes are authentic in defending their community.

While Guerrero says the vigilantes have reduced crime, he says he is not himself a militia member.

The government of President Enrique Peña Nieto has led a shifting and seemingly confused policy on Mexico’s vigilante movement. At times it has ignored them, at others attacked them, and sometimes actively worked with them.

Peña Nieto repeatedly condemned people taking justice into their own hands — but then in May he made a speech in Michoacan recognizing the work of vigilantes there.

The administration is currently waging an offensive by soldiers and federal police in Tamaulipas to quell cartel violence plaguing the state. In the last two months, troops have arrested ranking gangsters from both the Zetas and the Gulf Cartel.

“We are working in a good coordinated way and with good results to win back the tranquility of Tamaulipas,” Mexico’s Interior Secretary Miguel Osorio Chong told the government’s news agency. “All the criminals who have hurt the Mexicans’ tranquility will have to fall.”

However, many residents in the embattled state are concerned that the federal offensive won’t do enough to protect them from ruthless gangsters.

In June, thousands of marchers dressed in white took to the streets of the Tamaulipas cities of Victoria and Tampico, calling for better security.

While some of these residents sympathize with vigilante efforts like those of the Pedro Mendez Column, others want to pressure the government to police them better.

“I think the self-defense groups [vigilantes] are dangerous,” said Raul Villarreal, a furniture store owner in Victoria who marched against crime. “A shoemaker makes shoes. A businessman does business. You need trained police officers to fight crime, not just anybody with a gun.”