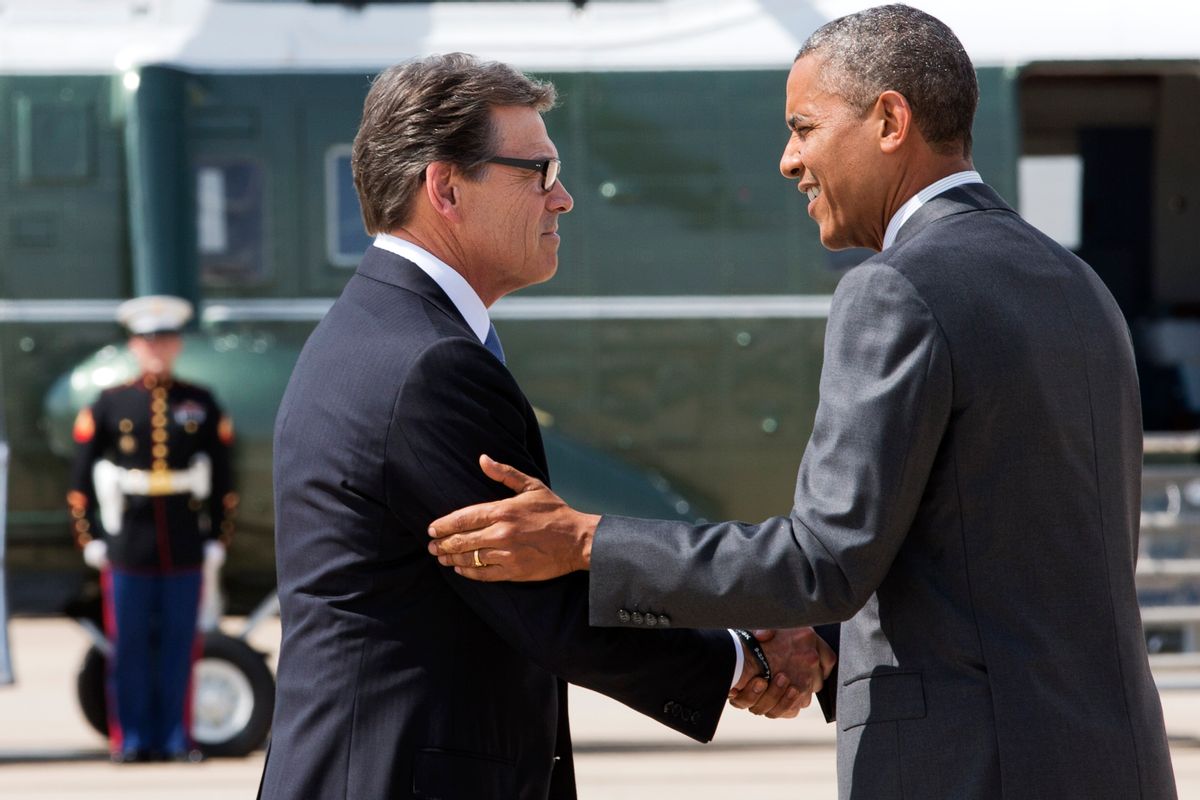 President Barack Obama, right, and Texas Gov. Rick Perry shake hands as Obama arrives in Dallas where they will attend a meeting about the border and immigration together, Wednesday, July 9, 2014. (AP Photo/Jacquelyn Martin) (AP)
--

U.S. officials acknowledge being overwhelmed by tens of thousands of children fleeing drug violence in Central America and lured to America by rumors they can stay.

U.S. military commanders suggest perpetrators of a second assault on a CIA complex were probably different from those who attacked the American diplomatic mission the night before, the AP learns.

3. ISRAEL STEPS UP OFFENSIVE AS DIPLOMACY KICKS OFF

Egypt and U.S. Secretary of State Kerry intervene and U.N. chief Ban Ki-Moon warns of a "deteriorating situation" as violence persists between Israel and the Palestinians.

Prime Minister al-Maliki alleges the Kurdish self-rule region is harboring Sunni militants who have overrun much of the country, an accusation Kurds call "baseless."

5. HOW GOLDEN STATE PLANS TO DEAL WITH HISTORIC DROUGHT

Californians will face the threat of $500-a-day fines for wasting water on lawns, cars, sidewalks and decorative fountains if the state water board approves tougher rules.

The tumultuous odyssey of Ray Nagin comes to a close with a federal judge sentencing him to 10 years in prison for corruption.

A jury awards a San Francisco Giants fan $18 million in damages, of which $15 million must be paid by the Los Angeles Dodgers for not providing adequate security.

8. WHAT JUSTIN BIEBER GOT IN EGG-THROWING CASE

The pop singer is ordered to pay $80,900 in damages and serve two years on probation after pleading no contest for the January incident in California.

9. SURVEY: RAPES NOT INVESTIGATED AT 2 IN 5 COLLEGES

A lack of coordination between many campuses and local law enforcement in handling sexual assaults is cited as a reason.

Goalkeeper Sergio Romero saves two penalty kicks to send Argentina into the World Cup final with a 4-2 shootout win over the Netherlands.