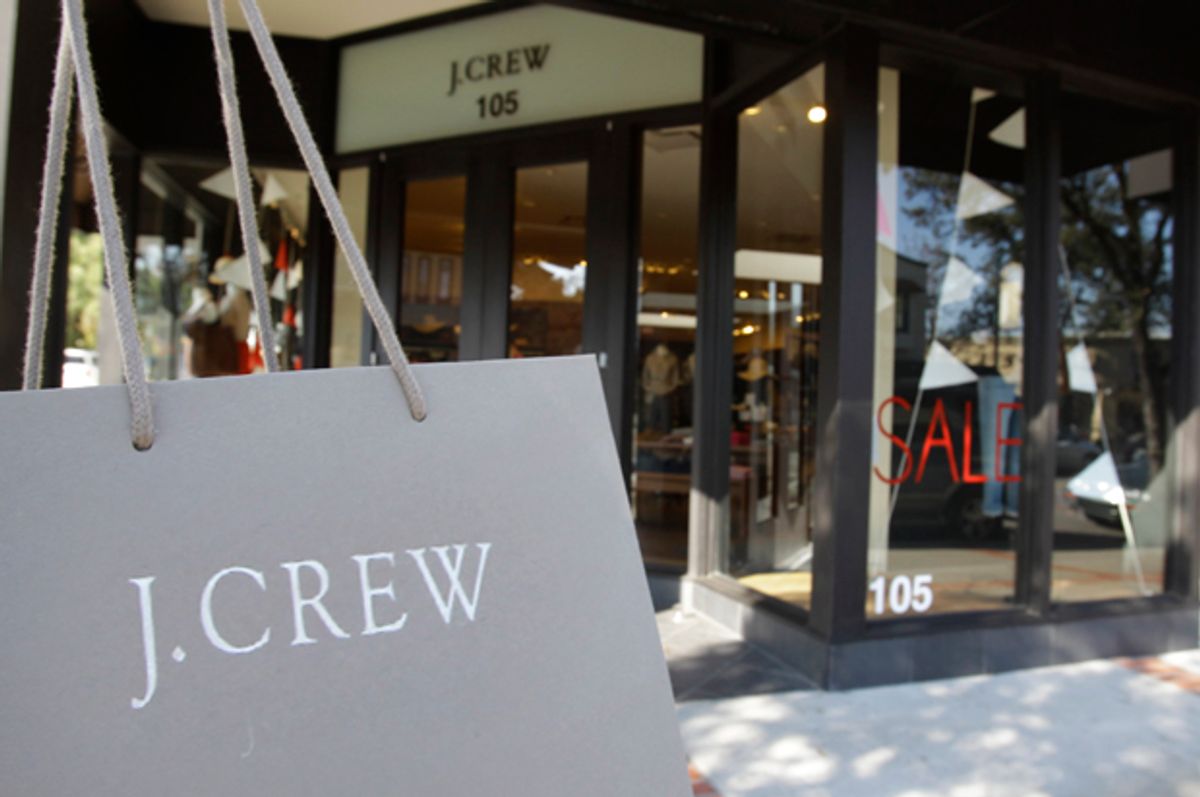 Small just got smaller. J.Crew, the venerable retailer of preppy clothing and occasional Fox News outrage, is rolling out a new size. Set your aspirations lower, because now, right beneath its XXS -- or 00 -- sizes, you are now able to shop for clothing in XXXS – or 000 if you're numeric about it.

As Time points out, the new size, which will fit women with a 30.5-inch bust and a 23-inch waist, will be good news to ladies like Dita Von Teese, who claims that years of strict corseting have winnowed her down to a 22-inch midsection. And if you're a tall fourth-grader, I imagine this will come in handy for you as well. It's safe to say the majority of females who've gotten their periods won't, however, be squeezing into the new size. For "Today" on Wednesday, a spokesman for the company defended the new sizing, citing another audience. "We are simply addressing the demand coming from Asia for smaller sizes than what we had carried," she said. "Our sizes typically run big and the Asia market tends to run small. To further put into perspective, these sizes add up to the smallest possible percentage of our overall sizing assortment. Also to note, J.Crew's sizes run across the board to try and accommodate as many customers as possible … We run up to size 16, we carry petites and talls, and our shoe sizes run from 5-12. [It's] all based on customer demand."

It's true that bodies across the world are built differently, but it seems a little unsporting of J.Crew to blame its unorthodox sizing methods on its Asian customers. Nor does it take into account how evenly the company truly shows its support for its patrons of all body types. Consider, for instance, J.Crew's online "special sizes" "size 16" shop, which hilariously features an array of noticeably slender models. Observe its pants sizes, helpfully abundant in "skinny," "straight" and "slim" cuts. And laugh with me, won't you, anyone who's ever been in a J.Crew dressing room, at the company's assertion that its sizes "run big."

Vanity sizing is no secret in the retail industry, and for years clothing manufacturers have steadfastly been resetting their sizes lower to encourage patrons to feel better about buying their clothes. If you shop, you now must go along with the illusion that 8 is the new 12. One of the most devastating remarks I've ever heard was when a famous plus-size female recently bragged of being a size six and a friend dryly noted, "Please. She's not even a Kohl's six."

Of course there are women with 30-inch busts and 23-inch waists out there, and they need well-fitting clothes too. Have you ever shopped for vintage clothes? Did women of other eras even have ribs? But it's as laughable to deem those women triple zeroes as it would be to, say, make a speaker that goes all the way to 11. It infantilizes everybody, says that it's better for a brand to have three full zero-based sizes than to readjust the sizing to a more realistic system because female consumers just prefer tiny, tiny numbers. When retailers first introduced the subzero size eight years ago, insider Jim Lovejoy told Newsweek, "Most companies aren't using the standard ASTM [American Society for Testing and Materials] sizes anymore. Sizes have been creeping up a half inch at a time so that women can fit into smaller sizes and feel good about it."

As the Capitol Hill Style blogger Belle said last week, "Vanity sizing is based on the misguided notion that you need to lie to women in order to sell clothing ... I won't support J.Crew's decision to expand their sizing downward because it feeds into the notion that clothing size is a scarlet letter. The practical and reasonable thing to do would be to create a measurement guide that isn't abhorrently dishonest, accepting that the brand now sells size 24 clothing."

Rolling out a triple zero size doesn't tell consumers, hey, we're just trying to please the Asian market. It instead immediately makes the triple zero aspirational for the slim-hipped fans of J. Crew's Ivy League look, and opens the gates for other brands to do the same. It doesn't just reduce women to a number, it reduces them to nothingness -- and then assigns ever shrinking degrees of that nothingness.