Under house arrest and barred from filmmaking, Jafar Panahi creates a tender, mysterious fable of art and freedom 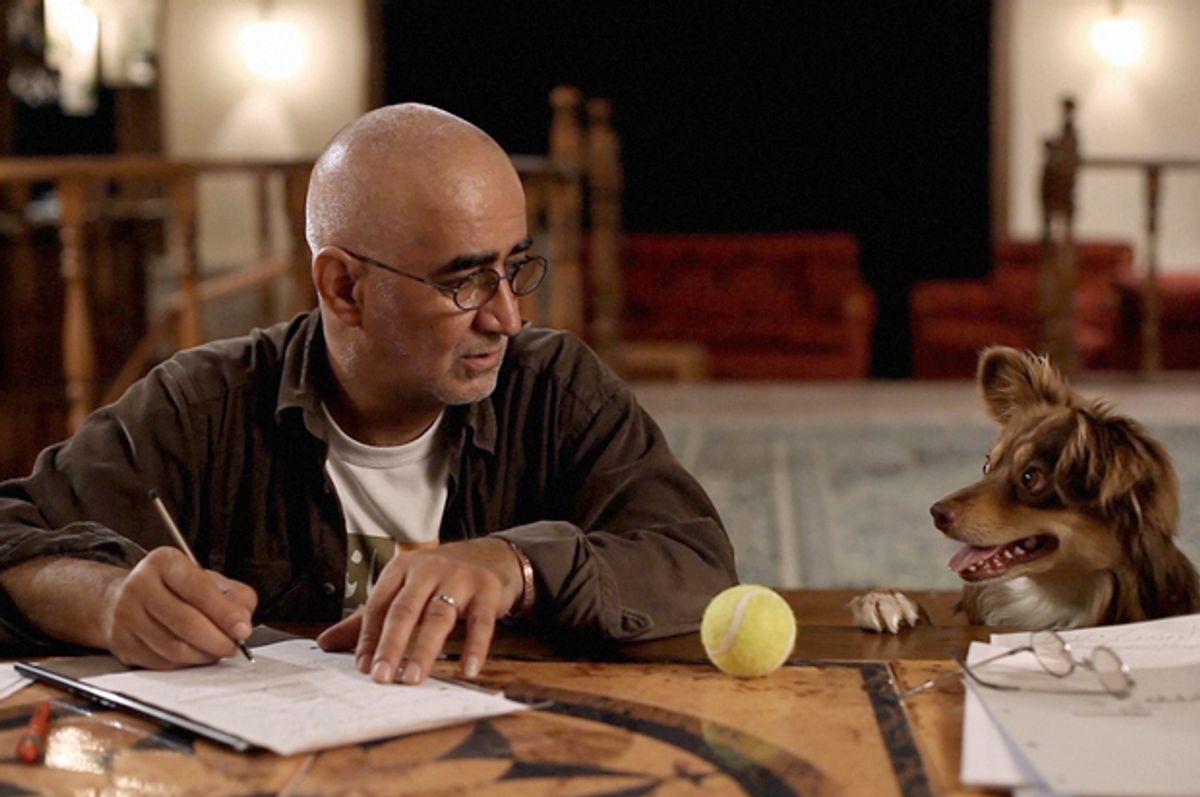 “Are there windows behind those curtains?” asks the mysterious woman to the mysterious writer in Jafar Panahi’s “Closed Curtain,” an ambiguous, allegorical film made by the world’s best-known banned director. We think we know the answer to that question – the writer has locked himself (and his adorable dog) up in an isolated beach house, pulling blackout curtains across the windows to conceal his presence from prying eyes. But it turns out to be a trick question. Some of those black curtains turn out to conceal not windows but enormous, framed film posters – for the internationally acclaimed movies of Jafar Panahi.

Indeed, the sole set and location for “Closed Curtain” is Panahi’s lakeside villa (presumably on the Caspian Sea), a gilded cage he cannot leave without the permission of the Iranian government. And making a film, even inside his cage, is an act of open defiance. Once a celebrated director of the so-called Iranian New Wave who made puckish, mildly seditious films like the 2006 international hit “Offside” -- about a group of girls trying to sneak into Tehran’s soccer stadium -- Panahi has spent the last five years as poster boy for the Iranian regime’s persecution of artists. After the mullahs shut down a movie Panahi began making in 2010, he was convicted, in essence, of a thought-crime: “the intention to commit crimes against the country’s national security and propaganda against the Islamic Republic.” Exactly why Panahi was singled out for this treatment, while equally prominent Iranian directors like Asghar Farhadi, Abbas Kiarostami, Mohsen Makhmalbaf and many others have either been tolerated or allowed to emigrate, is not entirely clear to me.

There’s been a capricious back-and-forth ever since that is somewhat typical of autocratic regimes: Panahi was sentenced to six years in prison, and then allowed to serve it under house arrest, in his Tehran apartment and also (evidently) at his lake house. He was also barred from filmmaking for 20 years, and the government seems unsure how to deal with his adamant refusal to obey. While the Tehran regime issued loud protests about "Closed Curtain's" premiere at the Berlin Film Festival last year (where it won the screenplay prize), there ultimately wasn't much they could do about it. Panahi’s case has become an international cause célèbre, the subject of petitions from filmmakers and film critics (I signed one) and an Amnesty International campaign spearheaded by Paul Haggis and Sean Penn. He has won the Sakharov Prize from the European Parliament, been named to the Cannes Film Festival’s jury in absentia (a chair was kept empty), and become the topic of a speech by Barack Obama. None of this has changed the Iranian government’s mind, unsurprisingly – but it has thoroughly swamped any discussion of Panahi's actual work and turned him into an issue instead of an artist.

“Closed Curtain” can be read as an effort to reclaim that lost territory. While it has no budget, no sets and only one professional actor (Maryam Moghadam, as the woman who may or may not be real), it’s much closer to being a “real” Panahi movie than the 2011 “This Is Not a Film,” which was supposedly smuggled out of Iran on a thumb drive baked into a cake. That was largely a video essay about the Orwellian nature of Panahi’s case, partly an experiment in stripping down narrative to stick figures on a carpet (literally) and entirely an anti-regime prank. “Closed Curtain,” on the other hand, combines elements of thriller, domestic comedy and frame-breaking documentary realism, and offers a loving portrayal of ordinary Iranian society, as it functions below the surface under the theocracy. For Panahi, getting a window repaired is a delicate task that requires enlisting his neighbor and occasional caretaker to recruit a couple of local guys who will do the job for cash without asking questions. They know perfectly well whose house this is – one of them wants his picture taken with the famous banned filmmaker, while the other politely declines: “It’s a bit dangerous for me, sir. You understand.”

But by the time Panahi himself shows up as a performer and/or character in “Closed Curtain,” we’ve already grasped that this is a dreamlike psychological landscape, not unlike a no-budget version of the haunted spaceship in Andrei Tarkovsky’s “Solaris.” Something has happened in Panahi’s lake house, but how “real” those events and people are we can’t be sure. The nameless middle-aged writer, played by Panahi’s co-director and collaborator Kambozia Partovi, shows up with his irresistible terrier, entering the house at the end of an opening shot out the villa’s window that lasts more than five minutes. Partovi blacks out the windows and shaves off all his hair, but before long we understand that he’s not hiding for his own sake. He's actually trying to hide his beloved pooch from the Islamic Republic’s murderous anti-dog policy. Say this for Panahi: He knows what nerve to touch. Sure, the Iranian mullahs oppress women, imprison artists and are viciously intolerant of gay people. But never mind all that -- they kill puppies!

Difficult as it is to focus on anything else when the irresistible doggie is on-screen, then the woman played by Moghadam shows up, entering and exiting the house via unclear methods and sometimes accompanied by a guy who may be her lover or her brother. Maybe they’re real people who got chased away from a boozy beach party by the religious cops, and maybe they’re, I don’t know, externalized elements of the writer’s imagination. Come to think of it, how real is Partovi's character? Why doesn’t Panahi appear to see either of them, when he arrives to discover that the place has been ransacked and the beachfront window smashed?

If this sort of thing frustrates you no end, if you want all your narrative questions answered and all the loose ends tied up – or you don't wish to put up with a deep-focus, wide-screen landscape shot, filmed with an iPhone -- then you’re better off giving “Closed Curtain” a pass. But if you’re willing to roll with the tremendous loneliness, sadness and ambiguity of this tender parable about life and art in bizarrely constricted circumstances, it restores Jafar Panahi to us as something more than a noble sacrifice.

Closed Curtain Iran Jafar Panahi Movies Our Picks Our Picks: Movies This Is Not A Film