It has been six months since chemicals spilled into the Elk River contaminating 300,000 people's drinking water 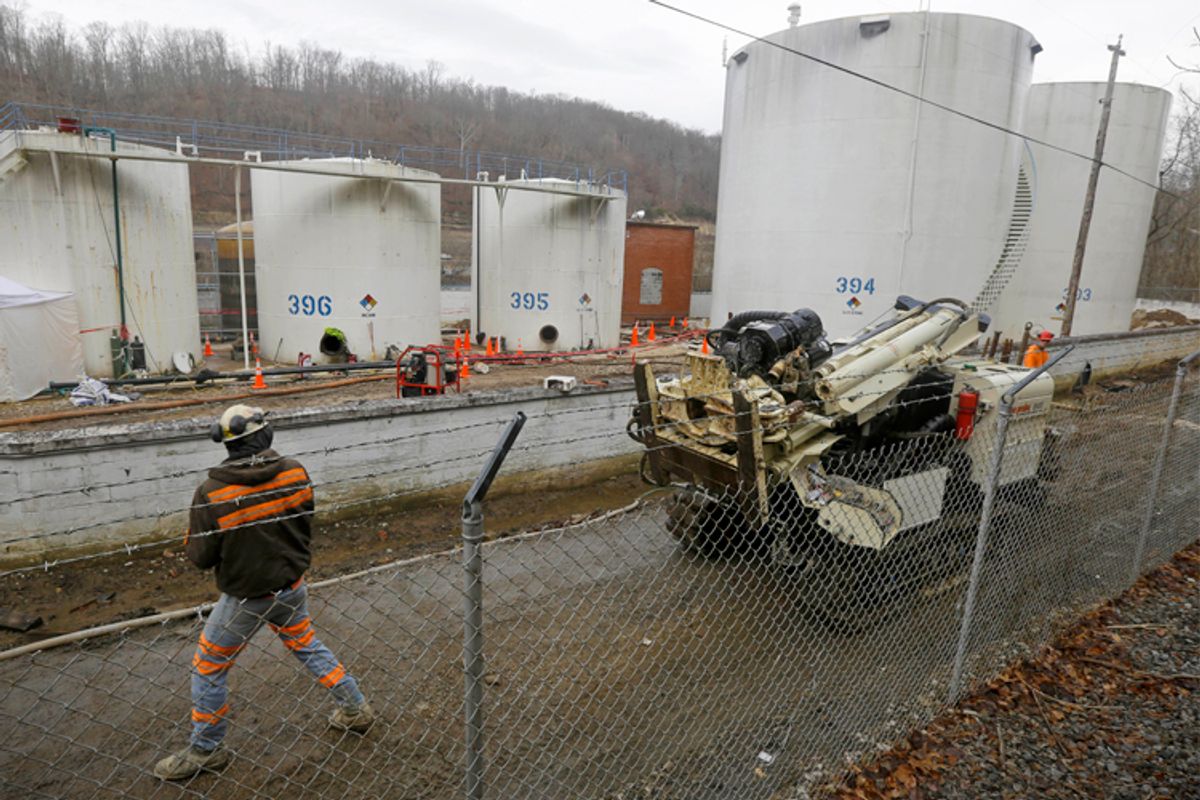 Wednesday marked the six-month anniversary of the infamous toxic chemical spill in West Virginia. Two days before, on June 7, the U.S. Department of Labor leveled an $11,000 fine (yep, that's it) on the company, Freedom Industries, responsible for spilling 10,000 gallons of crude MCHM (a chemical used in the production of coal) into the Elk River.

At the time of the spill, the wall surrounding the chemical tanks -- full of crude MCMH -- was not liquid tight, earning the company a $7,000 fine, according to Think Progress. OSHA also fined Freedom Industries $4,000 for lacking railings on an elevated platform that was used to load and store chemicals in the tank.

Another "other than serious" infraction was found -- a chemical tank improperly labeled glycerin rather than crude MCHM -- but did not warrant a fine.

Think Progress also reports that the tank, which eventually leaked the licorice odor chemical, had not been inspected in over 20 years -- in 1991, when the plant was owned by an entirely different company. Monday's inspection also marked the first time that OSHA inspected the facility, which is undoubtedly problematic.

“I think that it’s sad that this is the first time that OSHA has been at the facility,” Maya Nye, the president of the West Virginia citizen group People Concerned About Chemical Safety, said to ThinkProgress. “Had they been at the facility previously, maybe the incident could have been prevented, because these issues would have been noted sooner.”

Think Progress also explained another important reason to have inspections:

'Nye said regular inspections of chemical storage sites — especially ones located right next to drinking water supplies — are necessary to prevent spills, because the fines wind up being relatively minuscule compared to the costs of keeping equipment up to snuff, and compared to how much money the company makes.

"'It’s kind of like a slap on the wrist,' Nye said. 'For a lot of industries, it’s easier to pay the fine than fix the problem, which ends up posing dangers to the workers and the community.'"

Freedom Industries filed for Chapter 11 bankruptcy in January, following the spill and claims that arose from it. According to Think Progress it had $10,000 in assets and $10,000 in debts.

The cost to the community was far worse: The water supply for 300,000 civilians was contaminated, and around 600 people visited the hospital with issues including rash, nausea, stomach pain, vomiting, diarrhea related to the contaminated water.

Also, the toxins may have been much worse than anticipated. According to a federally funded study, which was released earlier on Thursday, the MCHM may have been more environmentally potent than Eastman, the company that produces the chemical, had stated.

The numbers released from Eastman's tests were from 1998. Andrew Whelton, an environmental engineer, replicated the test with "the same water chemistry, temperature, quality, and organisms," according to Think Progress, and his results were dramatically different.

Whelton did acknowledge that there could be reasons for the difference in data -- including that MCHM today may be different than MCHM in 1998. And it is important to note that this test does not relate to people's health; it does present an issue. Whelton explains to Think Progress:

"'What is important is that the findings further demonstrate that additional work is needed to better understand the short- and long-term toxicity implications of this contaminated water,' Whelton said. 'Somebody else needs to replicate Eastman’s work, and if the study that someone else conducts turns out to show that crude MCHM is more toxic, then that calls into question the toxicity data was published that was used as a basis for public health response.'"