Sarah Palin and Rick Perry argue that the border refugee crisis may be a deliberate plot by Obama. Umm ... go on? 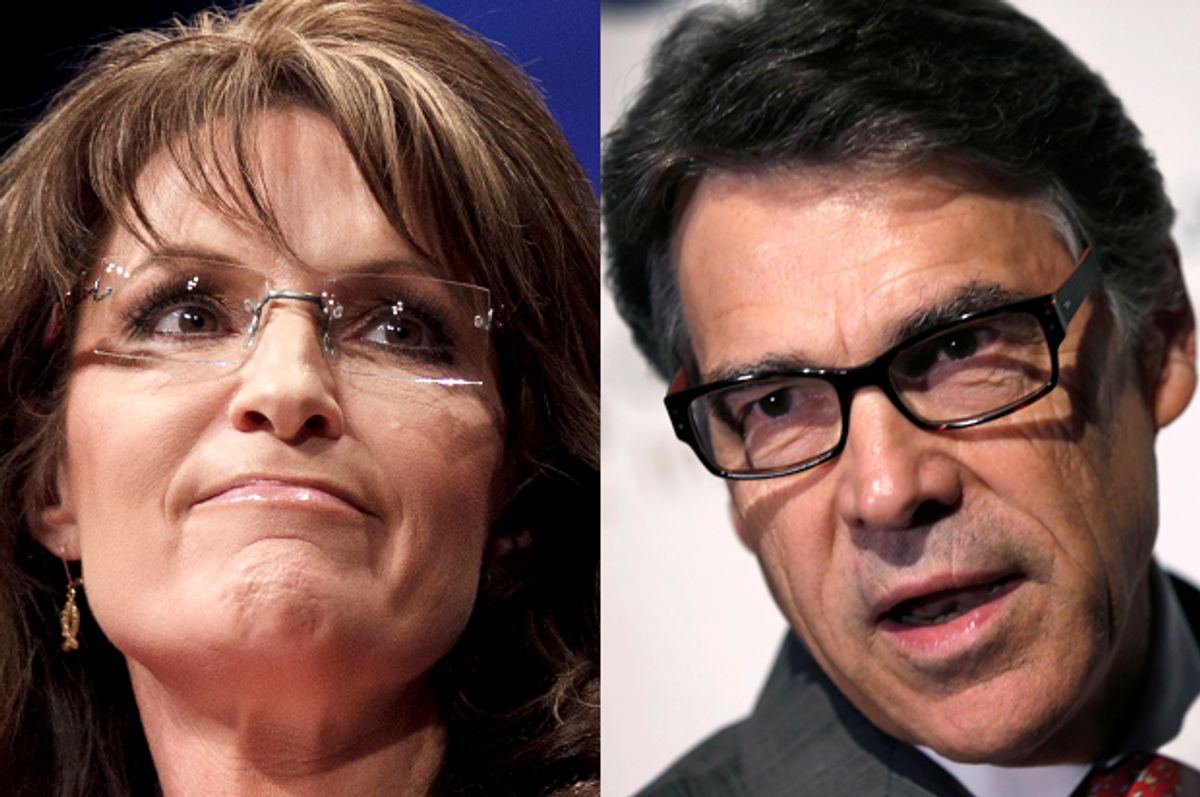 There comes a time, whenever Republicans see an opportunity to score political points against President Obama, for them to make a decision: Do we argue that this is merely a matter of presidential incompetence -- of bad policy coupled with poor enforcement -- or do we suggest that it's a deliberate move by the president to stoke a crisis and to transform America into his dark, imperial wasteland?

And if there's ever a story from which to score political points, it's the sight of thousands of desperate children fleeing violence in Central American countries to sleep on the floors of makeshift detention centers in the American Southwest. What an opportunity -- thanks, kids!

The "presidential incompetence" line is your standard, Why hasn't Obama thrown these kids one-by-one back over the fence yet? What's taking so long? It also suggests that DACA, the president's 2012 executive order slowing deportations for people under 31 who came to the country illegally before 2007, is the root cause of the problem. That doesn't make a lot of sense, since that "before 2007" part doesn't give these children much hope. (Although perhaps in some cases, after a muddled game of international telephone had run its course, Central American parents weren't clearly informed of the fine print.)

The "deliberate" strategy allots more space for conservative creativity. This is the path, believe it or not, that Sarah Palin has chosen in her argument for Obama's impeachment. "Without borders, there is no nation. Obama knows this," she wrote earlier this week. "Opening our borders to a flood of illegal immigrants is deliberate. This is his fundamental transformation of America." (Her link goes to a story about how Border Patrol agents are being told not to protect the border, according to one union representative.) Comprehensive immigration reform, DACA, secret orders not to protect the border: all components of the president's plan to flood the country with neighbors from our south and "fundamentally" transform United States' demographics into something less "American."

Texas Gov. Rick Perry, who met (awkwardly) with President Obama yesterday, isn't sure whether to go with "incompetence" or "deliberate conspiracy." He suggested it could be either in an appearance on Fox News recently. "We either have an incredibly inept administration, or they're in on this somehow or another," he said. "I mean, I hate to be conspiratorial, but I mean how do you move that many people from Central America across Mexico and then into the United States without there being a fairly coordinated effort?" Yeah, is Obama renting them buses?

The thing about conspiracy theories: When you argue on television that something could be either incompetence or a conspiracy, that still counts as promoting a conspiracy theory. Perry was confronted on this in a CNN interview this morning:

"Do you really honestly believe, as you said in that interview last month, that the administration might be in on this somehow?" [host Kate Bolduan] asked on CNN's "New Day." "I mean, you're suggesting there's some kind of conspiracy here."

"No. What I'm suggesting is that this administration and their words and their actions, or the lack thereof, are part of the problem," Perry responded. "I think you're putting the words of conspiracy in my mouth, which I did not say."

"No, you actually did say the word 'I hate to be conspiratorial,'" Bolduan pressed.

Busloads of child refugees are showing up at the border not because the president is renting them buses and shuttling them up to an unguarded border to change the demographics of the United States as part of his Grand Transformation project. "At the root of the crisis," as the New York Times writes today, "is a 2008 law intended to curb human trafficking abuses. It requires officials to provide extra legal protections for migrants coming from countries that do not share a border with the United States." This law was passed on voice-vote at the end of George W. Bush's term because, hey, trafficking sounds bad. But, as the Times continues, "[T]he unintended consequence has been to allow children from El Salvador, Guatemala and Honduras to overwhelm the immigration system." In other words, this law over which there was no disagreement ended up working really well.

Obama has suggested Congress change the law so as to speed up deportations of these refugees. Dave Weigel suggests that this is another way in which Republicans feel played, as though Obama's using this crisis to present them as inhumane monsters:

The Obama administration is citing this as the reason why deportations have plunged, and asked Congress to fix it. We dare you. You just killed immigration reform — now, go ahead and make it easier to for young Central Americans to be sent into sex slavery. (I'm paraphrasing.)

Except that since Obama is asking them to fix the law, for the purpose of speeding up deportations, he would be implicated in such savagery too. Indeed, Obama's already earned scorn from reformers on this end.

In an apolitical fantasy world, the problem would be relatively simple to diagnose and solve. Congress passed a law in 2008 that many of its members now deem to have had unintended negative consequences. Congress would pass a bill amending the law and President Obama would sign it.

In our argle-bargle highly political nonsense world, there is a problem somewhere in the United States, and election-minded Republicans must tether it to President Obama. So they argue either that this is incompetence and/or President Obama is ignoring the law (even though, as Dana Milbank writes, the crisis is a problem specifically because Obama is following the 2008 law) or that President Obama is deliberately stoking this for ideological, demographic and political gain. There's not much in the way of truth to either posture, and the even more far-flung one is gaining traction. So it goes.