Right-wing "populism" is a joke: Poor-bashing, immigrant-hating and a revolting agenda

From Sarah Palin to Pat Buchanan, here's what it really means when they speak to "the American worker" 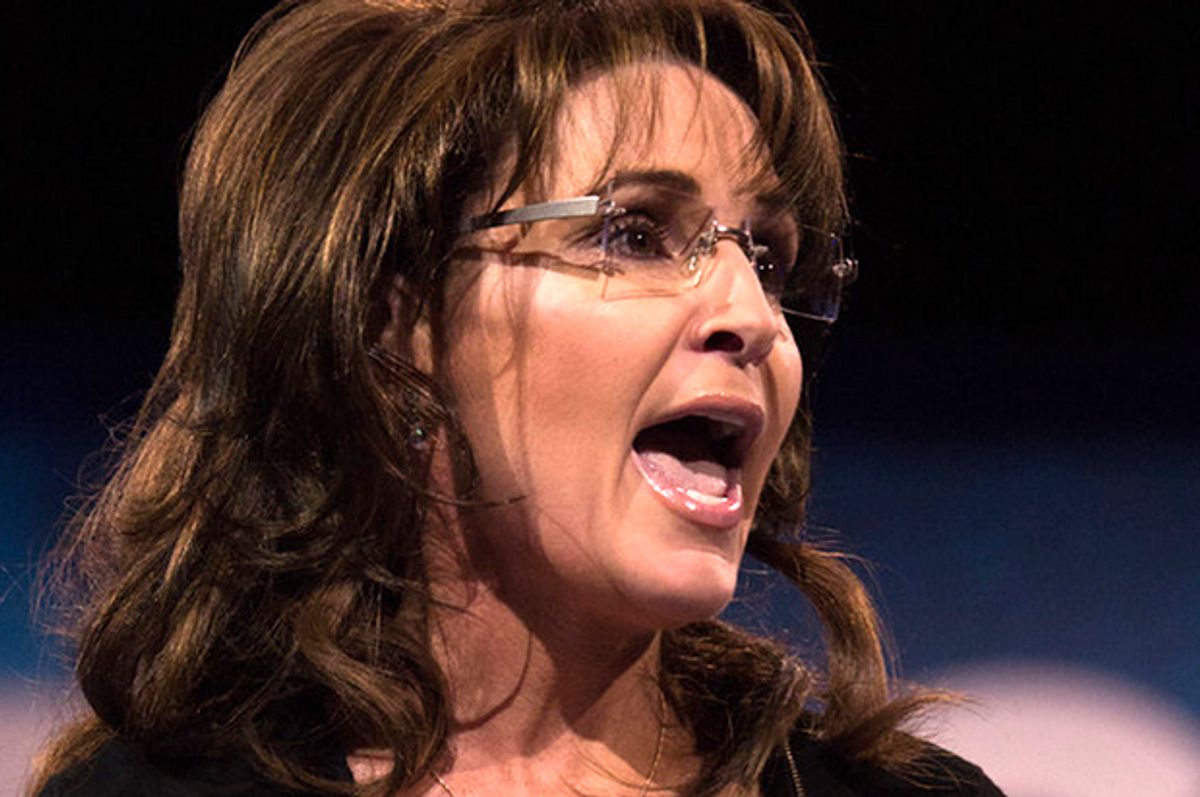 Writer John Judis presciently published an important book about American politics about a decade before its time called "The Paradox of American Democracy: Elites, Special Interests, and the Betrayal of the Public Trust" in which he accurately observed the seeds of discontent among the American public and its mistrust of political institutions. He saw the Tea Party coming before it was born. In the wake of David Brat's recent win over Eric Cantor he analyzed the race and helpfully defined the right-wing populism that drove it:

American populism is rooted in middle class resentment of those who are seen as enjoying the benefits of the goods and services the middle class produces without having earned them through work. Its ideology is what historians call “producerism.” It first appears in the Jacksonian Workingmen’s Parties and then in the Populists of the late nineteenth century. But it takes a leftwing and a rightwing form.

We see the two strains of populism springing up in both political parties with more and more energy. On the left the Elizabeth Warren wing is gaining steam. Her rousing cri de guerre from the last campaign -- "you didn't build that" -- speaks directly to these middle-class anxieties in the language of common good that left-wing populists like to hear. Indeed, she's been speaking and writing books about it for more than a decade.

But who's really speaking for the right on these issues? George Wallace is long gone and Pat Buchanan has been exiled from polite company. Under the yoke of their 1 percent benefactors and the demographic time bomb of a non-white majority, you have Paul Ryan and other Washington GOP players trying to walk the fine line between Wall Street's needs and the base's antipathy toward immigrants. Ted Cruz? Not really.  He's an Ivy League lawyer with a gift for demagoguery but he doesn't really have that common touch you need to be a true populist.

There actually is one right-wing populist speaker out there who has no trouble getting right to the heart of the matter:  Sarah Palin. Sure, she's something of a joke to the mainstream and nobody thinks she'll ever run for anything again. But her celebrity remains formidable as she uses the modern communications technologies to stay in touch with her followers. And she speaks their language perfectly.

Her article for Breitbart.com yesterday was ostensibly about pushing for President Obama's impeachment and it got quite a bit of play in the media. But that was almost incidental. What she spoke to was the populist anxiety that's permeating the right wing at the moment, anxiety that's increasingly focused on the "economic parasites" of the poor and the immigrant while paying some lip service to the exploitation of the Big Money Boyz who are pulling the strings. Palin's language is widely mocked by the cognoscenti, but it is as authentic as it gets when she expresses middle-class angst in right-wing terms:

The federal government is trillions of dollars in debt, many cities are on the verge of insolvency, our overrun healthcare system, police forces, social services, schools, and our unsustainably generous welfare-state programs are stretched to the max. We average Americans know that. So why has this issue been allowed to be turned upside down with our “leader” creating such unsafe conditions while at the same time obstructing any economic recovery by creating more dependents than he allows producers? His friendly wealthy bipartisan elite, who want cheap foreign labor and can afford for themselves the best “border security” money can buy in their own exclusive communities, do not care that Obama tapped us out.

Have faith that average American workers – native-born and wonderful legal immigrants of all races, backgrounds, and political parties – do care because we’re the ones getting screwed as we’re forced to follow all our government’s rules while others are not required to do so. Many now feel like strangers in their own land. It’s the American worker who is forced to deal with Obama’s latest crisis with our hard-earned tax dollars while middle class wages decrease, sustainable jobs get more scarce, and communities become unrecognizable and bankrupted due to Obama’s flood of illegal immigration.

Who’s looking out for the American worker? Who has their backs? Who fights for them?

She hits all the right-wing populist hot spots: government debt, crumbling cities (where the "wrong people" live), a healthcare system that's "overrun" (by people who don't deserve to use it) an entire public sector that's being starved because of our "overly-generous" welfare programs. The "leader" (in scare quotes) is creating unsafe conditions on behalf of the bipartisan elites who can buy their own border security and don't care about the "Average Americans" like Sarah Palin who are broke and feel like "strangers in their own land" (the one stolen from others and settled by immigrants). If only she added a Buchananesque "you didn't build that -- Jose" it would have been the bizarroworld image of the Elizabeth Warren speech.

Notice that Palin emphasizes the words "American worker" rather than middle class, thus evoking a kind of blue-collar vibe, which she has always done going back to the 2008 campaign in which she often showed solidarity with the "guys in steel toed boots." But she's making a play for others as well, like office workers and retail clerks and police officers, middle-class workers and small business owners who are still under pressure in an economy with stagnant wages, crumbling infrastructure and stingy services. Unfortunately, most of their problems can be traced to the income and wealth disparities created by the policies enacted on behalf of the 1 percent. And the fact is that no members of government have pushed those policies more fervently and relentlessly over many decades than the Republican Party. If "the worker" was their concern they have a funny way of showing it. And yes, the Democrats have certainly been complicit in advancing those policies. But they can at least boast of the fact that they have mostly avoided outright blaming immigrants and the poor for the stagnation of the middle class and the fading of the American Dream.

There are some areas of agreement among the left and right populists. They are both hostile to the "wealthy bipartisan elite" although for somewhat different reasons. It's possible there could be some common legislative ground if both sides were sincere in their desire to rein in money in politics. But Sarah Palin's words speak of a different priority -- the visceral hostility toward immigrants and the obvious belief that they and other poor people are at the root of "workers'" problems. One certainly hopes that the poor and immigrant populations aren't seen as chips in a negotiating session on these issues, but it wouldn't be the first time that such devil's bargains were made.

The real impediment to any agreement is the fact that most of the populist right is being funded and informed by the same wealthy interests they claim are destroying America with their immigrant-loving ways. These wealthy interests are actually less concerned about keeping their cheap immigrant labor (there are many ways of skinning that cat) than they are about the fact that the Republican Party is in grave danger of locking itself out of the executive branch for generations if it is seen as being overtly hostile to Latinos. They've invested a lot of time and money in the GOP and they do not wish to lose their grip on power simply because Sarah Palin and her friends don't like immigrants. But there's not much they can do about it -- they've been stoking this right-wing populist base for decades now and that fire is now burning out of control.

Indeed, they may find over the next few years that the Democratic elites are friendlier terrain. They certainly seem eager to entertain the possibility.  Will the liberal populists be organized enough to face that challenge?