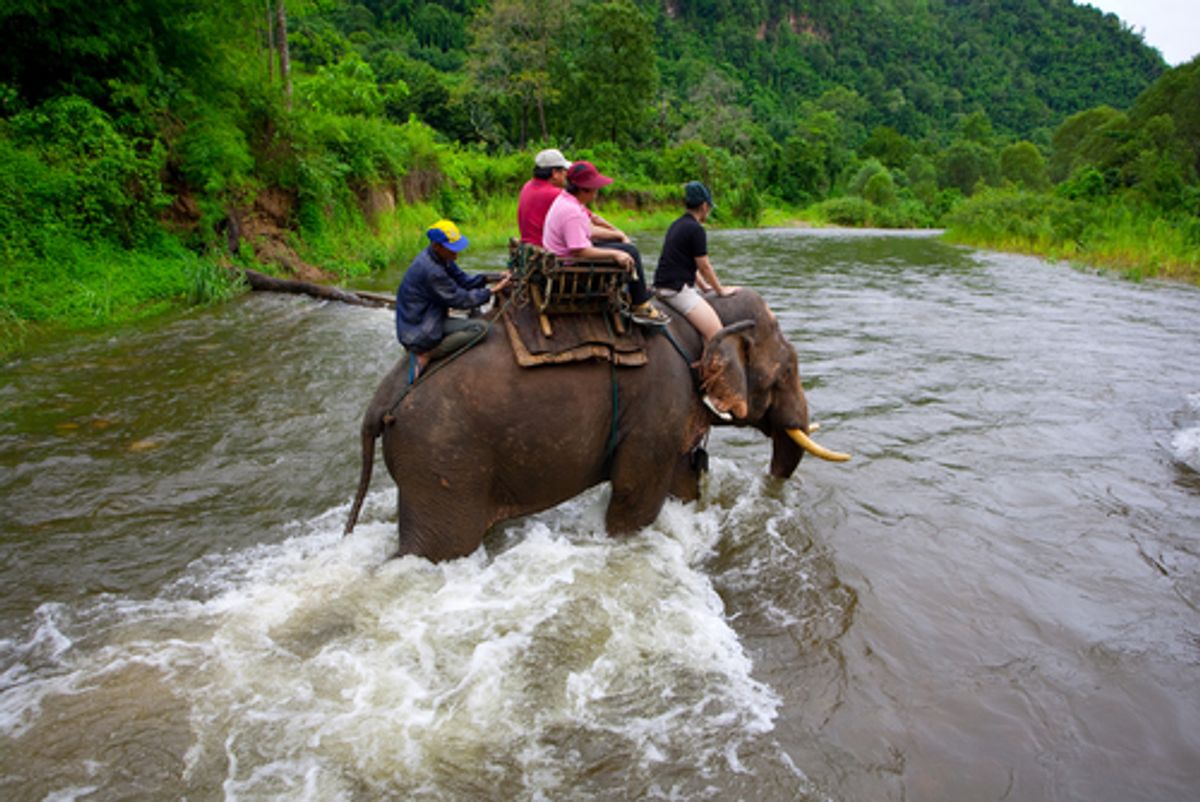 Seated atop a rollicking elephant on a rudimentary platform strapped to the animal’s back, tourists in Thailand take happy snaps as a mahout edges one of Asia’s largest land mammals along with a stick.

But at the end of this stick glints the curve of a blade. Underneath the platform, the elephant’s back is blistered and raw — apt metaphors for the dark underbelly of Thailand’s elephant rides.

The Asian elephant is endangered, and demand by tourists for elephant rides in Thailand is fueling a system of abuse that compounds the threat to its survival, according to a new report from TRAFFIC, a leading international wildlife trade monitoring network.

Tourists often feel good about the elephant rides, having been told that the beasts have been “rescued” for “conservation,” and that the fees they pay will help the animals. Yet watchdogs say young elephants from neighboring Myanmar are being illegally captured and trafficked to Thailand under the protection of legal loopholes for sale into the tourist trade there.

The once-prolific population of wild elephants in Myanmar, formerly known as Burma, has dwindled to between 4,000 and 5,000 in recent years. Development and deforestation are partly to blame, but capturing wild elephants, previously for logging but now increasingly for tourism, has played a key role in population declines and is now considered a major threat to wild elephants, the report argues.

“In Myanmar, domesticated elephants are used to corral wild animals into pit-traps where older protective members of herds are often killed and the higher value, younger animals taken,” the report reads. “The young are then transported to Thai-Myanmar border areas and then mentally broken and prepared for training before being sold into the tourism industry in Thailand where they are put to work at tourist camps or hotels.”

Thailand has no legislation that specifically addresses this type of animal trafficking, although some efforts have been made in the past to authenticate the origin of tourism elephants. One of the Thai legislation loopholes is the requirement that tourism elephants be registered only after they reach eight years of age, leaving young elephants from Myanmar highly vulnerable to being laundered into the Thai tourist trade.

TRAFFIC’s report recommends urgent reforms so wild and domesticated animals are governed under one law, clarifying responsibilities for management, enforcement and ownership of the animals, including mandatory DNA registration and use of microchips for tracking.

This week CITES, the international body concerned with protection of animals, meets to discuss the progress Thailand has made for protection of elephants.

“The Asian Elephant is the forgotten elephant; it needs government support now more than ever. If the capture and smuggling of calves is not stopped, some of the last great wild populations of the species are at risk of extinction," said Joanna Cary-Elwes, campaigns manager for wildlife NGO Elephant Family.

Travel for Wildlife zoologist Cristina Garcia said that the demand to ride elephants by tourists visiting Thailand underlies systematic abuse of the animals. The price of a young elephant has risen fivefold in recent years to $33,000. Mistreatment of the animals continues once they enter the tourist trade, Garcia said.

“Elephants used in the trekking industry suffer physical effects as they spend their lives carrying people on their backs. Their spines were never designed to carry people, and the weight of the chairs leads to long-term damage,” Garcia said. “Furthermore, the trekking platforms rub on their backs all day long, causing blisters and infection. Not to mention broken legs and foot damage.”

Despite this, wildlife experts say boycotting elephant tourism altogether is unnecessary. Instead they recommend tourists in Thailand and Myanmar wishing to interact with elephants do so through programs that offer ethical opportunities to feed, bathe or walk with the elephants instead of using the animals as a ride.

“If you still want to ride an elephant, you can look out for signs of mistreatment. If the elephants are chained and the mahouts use bull hooks, this is a sign of serious abuse,” Garcia said. “The bottom line is, taking a wild animal and using it for human entertainment is inherently not caring for it appropriately.”