Fallon's fallacy: What we lose, and gain, as talk shows abandon the "talk"

A new study calculates percentages of chat on late-night TV, and finds a drastic change in recent years 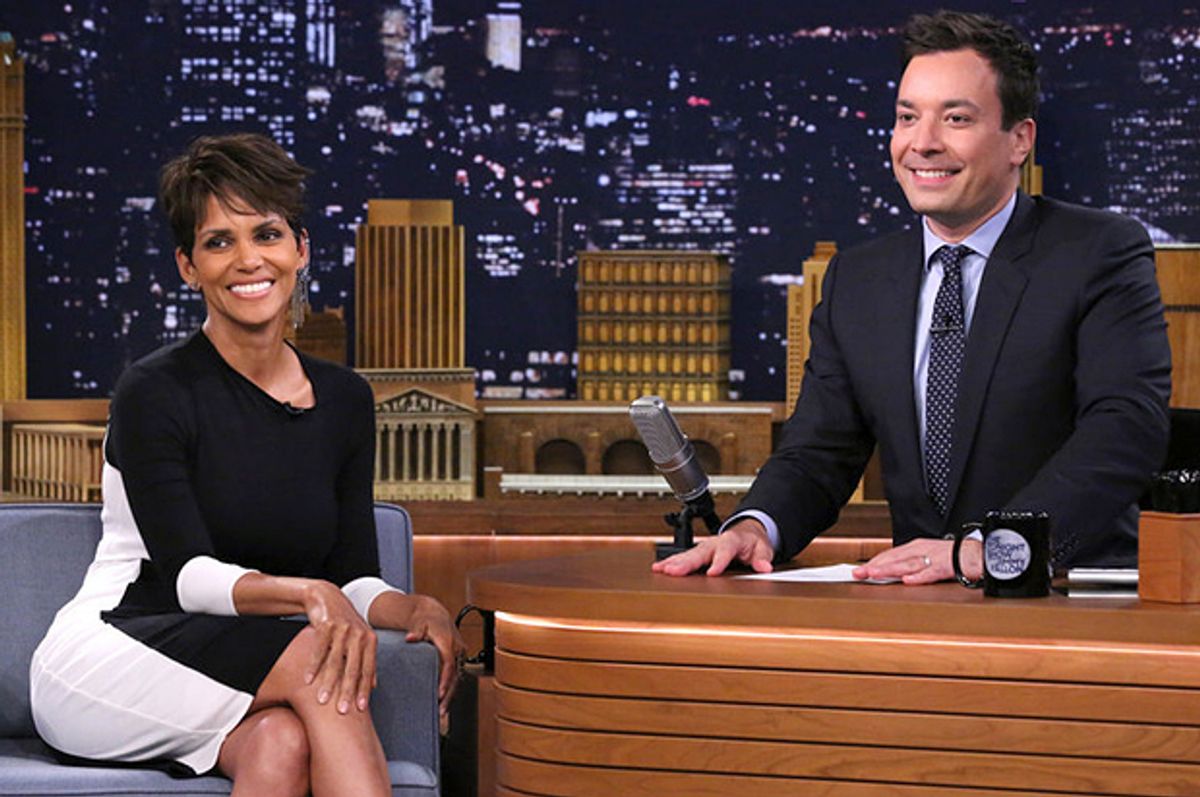 We're going to have to come up with a new name for talk shows.

For all the conversation about how little innovation there is in the late-night format -- Seth Meyers on NBC's "Late Night" was only the latest newly minted host to opt to do a nightly monologue even though his skill set is entirely elsewhere -- the shows that air in the witching hour are leaving talk behind in favor of quick-hit sketches. As Stephen Winzenburg, who researches communications and late-night TV, has written, Jimmy Fallon's "Tonight Show" in particular has significantly cut back the portion of the show in which guests just talk. The chat portion of his show takes up just 37 percent of the airtime. Craig Ferguson and Jimmy Kimmel also come in below 50 percent.

This shift comes with its own justifications. Celebrities would seem, in theory, to reveal more about their inner selves by playing a game or participating in a taped skit than in a canned interview. And Jimmy Kimmel's "Mean Tweets About Celebrities" bits or Jimmy Fallon's Charades can seem like a rebuke to decades' worth of P.R.-y interviews in which celebrities reveal absolutely nothing.

But, if we're moving toward a post-talk talk show future, there are two caveats. First, for every ten terrible Leno or Letterman interview, there was one that refreshingly cut through the dross. Sure, most of the time celebrities are just going on about their latest project and how inspiring it was to work with [insert director or co-star here]. But sometimes a peculiar chemistry breaks through. Hugh Grant's post-arrest interview with Jay Leno probably wouldn't happen today for many reasons, not least because Leno's successor would just try to get the scandal-plagued star to play a game with him. (Contrast the wasted opportunity that was Fallon's "Water War" with Lindsay Lohan against David Letterman's strangely moving pre-rehab interview with her last year to see just what late-night is getting, and giving up, as it moves to a new generation.)

David Letterman in particular was masterful at building rapport with female guests -- Natalie Portman, for instance, is literally never interesting unless she's on his couch, and then she's lots of fun! (It helps that he's been interviewing her since she was a teenager.) But the other problem with the move away from talk is that hosts still feel obligated to provide just a snippet of it, without bothering to make it good. Fallon offers a particularly piquant contrast to Letterman, and at this point if he doesn't want to do interviews, he probably just shouldn't. He treats every guest exactly the same: as a glancing Hollywood acquaintance, often offering up a party story about some mutual event they attended in order to prove their rapport. (For instance: Jennifer Lawrence and Fallon reminisced about the time they tried to get Jennifer Lopez to dance with them.) After Chris Colfer tweeted last week that he'd been fired from "Glee" and then said he'd been hacked, Fallon didn't press the issue at all and then moved on to a banal party-chat about buying stuff off Amazon, as though he were looking to get away from Colfer and talk to a more interesting guest. On the same episode, he pretty much exclusively talked to Halle Berry about how cool it was for her to be on an exciting TV show like "Extant." The two stars played charades with Fallon -- maybe they should have just done that for the full hour.

Stars these days are absolutely overexposed, in the tabloid press and on websites from TMZ to JustJared. But talk shows provide a rare opportunity to get a sense of what a star is actually all about -- how they react to a tough question or a barbed joke, what they have to say about the incredibly unusual circumstances that accompany being famous. Only Andy Cohen, on Bravo's "Watch What Happens," seems to grasp just how fundamental talk is to the talk-show format -- not because of boring old traditions, but because it simply seems like a waste to get a celebrity on your couch and then ask them just to do a skit with you, as if the ultimate goal of late-night TV were an endless stream of YouTube videos with a shelf-life of a day.