The Bipartisan Sportsmen's Act was an uncontroversial bill. Until two very political men were asked to get involved 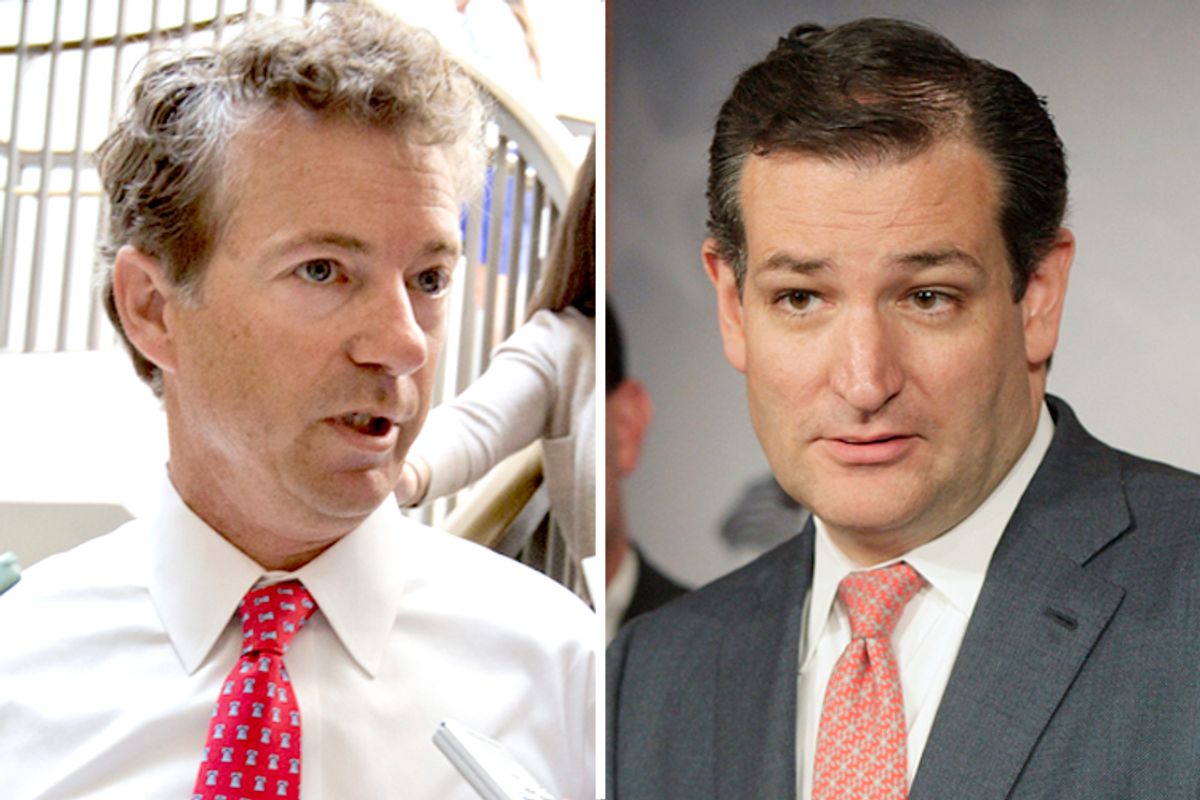 Earlier this week the Senate voted 82-12 to open debate on the Bipartisan Sportsmen's Act, a measure introduced by Democratic Sen. Kay Hagan that "aims to preserve federal lands for hunting, fishing and shooting" and had over 20 Republican co-sponsors. It also would "amend the Toxic Substances Control Act, preventing the Environmental Protection Agency from regulating ammunition and fishing equipment that may contain lead." Sounds ... lovely. What it really is, though, is a vehicle for an endangered red-state Democrat such as Kay Hagan to bring something home to brag about.

And that's why it had to die on Thursday, in a spectacularly cynical yet all-too-common flameout during amendment.

Republicans, who agreed with the bill in spirit but, more pertinently, knew that it might help Kay Hagan win reelection, pulled off a typical trick: trying to attach a number of insane gun lobby amendments to the bill that would force Hagan and other red-state Democrats to cast difficult votes.

Sen. Tom Coburn's amendment would limit "the circumstances under which veterans can be denied access to firearms because of mental illness." Sen. Ted Cruz's "would allow expanded interstate transport of ammunition and firearms." And then, there's beloved hero-Sen. Rand Paul, who thinks this hunting and fishing bill represents the latest perfectly reasonable opportunity to strip Washington, D.C., of all its gun laws.

Rand’s proposed amendment to the Bipartisan Sportsmen’s Act would repeal the registration requirement, end the ban on semi-automatic rifles and high-capacity magazines, expand the right to carry guns outside the home and protect the right to carry guns on federal land in D.C. and elsewhere in the country. In essence, the bill would eliminate the District’s local gun laws, leaving only federal firearms law to regulate gun ownership and use in the city.

(You've got to love the way Republicans casually introduce amendments to overhaul laws set by the local government of the District of Columbia. Oh, here's a little amendment to get rid of all your gun laws. Oh, here's a quick note I drew up to keep marijuana criminalized in your little town of sin. Non-voting Delegate Eleanor Holmes Norton, of course, is never consulted on these things, but members of Congress do seek her out when they want to bitch about the traffic. Anyway, this is an aside, which is why it's in parentheses.)

Once Coburn et al. drafted their amendments, pro-gun control Democrats decided to retaliate. "If we open this to a gun debate, we’re going to hear both sides," Sen. Dick Durbin said earlier in the week. And so he drew up an amendment to "stiffen the penalty for straw purchases of guns to 15 years in prison," while Sen. Richard Blumenthal offered one that "would temporarily take guns away from people who commit domestic violence and have a restraining order placed against them."

And so Harry Reid blocked amendments, Republicans withdrew their support, and the measure went down on a 41-56 cloture vote this morning. This is all well and good according to the Gun Owners of America, a lobby that had pushed for the Republican amendment flood to what it called "a do-nothing, reelection bill for Harry Reid’s cronies."

We weep not, reader, for the demise of the Bipartisan Sportsmen's Act of 2014. The nation will survive without it. But if a bill that essentially says "WE LIKE HUNTING AND FISHING" gets bogged down in an amendment battle about whether or not to have any gun control laws anymore and then dies, maybe it wouldn't be a bad idea to begin the August recess right now and extend it through Election Day.