A blood drive calls attention to the FDA's insane ban 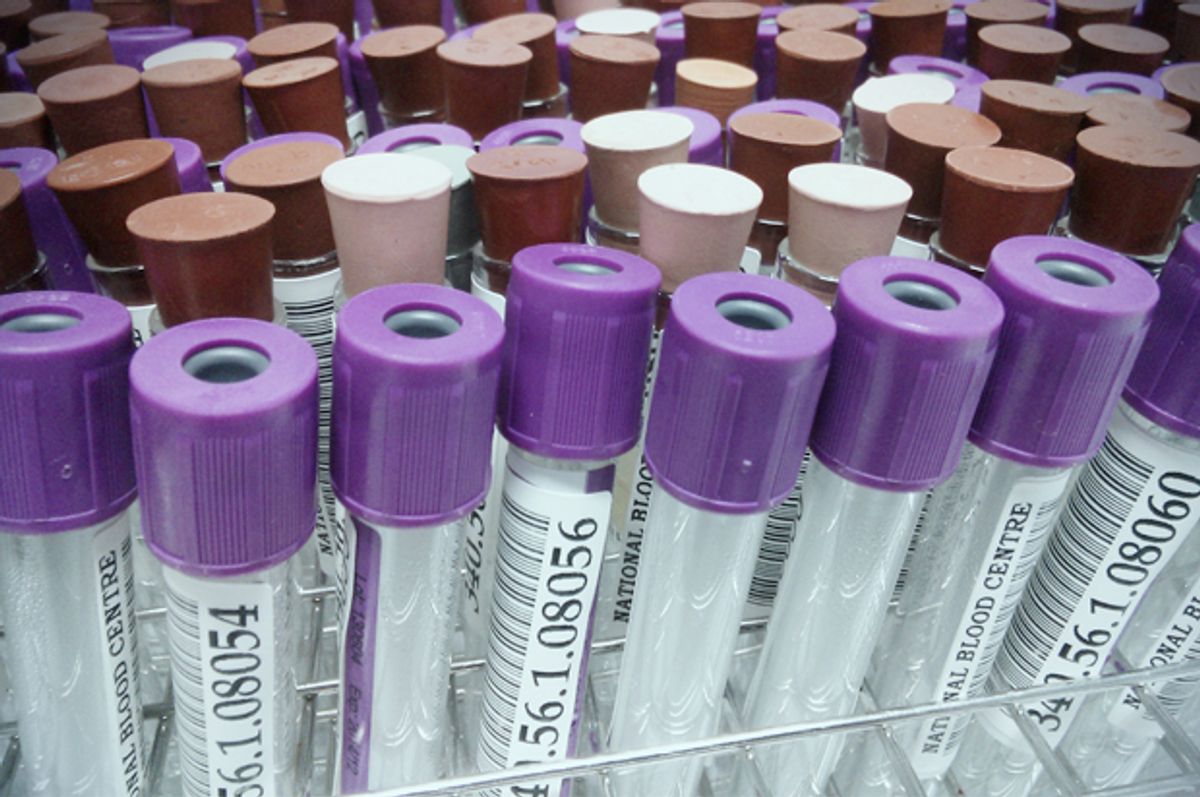 The world is a vastly different place than it was three decades ago, when Reagan was president and MTV still played music. Back then, in the still early days of the AIDS crisis, the panic about the ways in which the HIV virus could be transmitted was palpable and ferocious, and understanding the mysteries of detection and treatment was only just beginning. But we have come a very long way since then. We've had a blood test for HIV for nearly 30 years. It's been nearly that long since we've had a single case of HIV transmission via transfusion. Why, then, is the FDA still afraid of gay men's blood?

On Friday, gay and bisexual men and their eligible-to-donate allies are participating in the nation's second annual National Gay Blood Drive. The drive hopes to call attention to the FDA's senseless continued lifetime blood donor deferral for all men who have sex with another man since 1977. The first gay blood drive last summer shone a light on the situation and garnered headlines around the world, but unfortunately the FDA was unmoved, and the ban remains in place. The American Red Cross, America's Blood Centers and the American Association of Blood Banks all support easing the restriction, saying that they all "believe the current lifetime deferral for men who have had sex with other men should be modified and that donor deferral criteria should be made comparable with criteria for other behaviors that pose an increased risk for transmission of transfusion-transmitted infections."

The drive's organizer, Ryan James Yezak, has written a passionate and eloquent plea for lifting the ban this week for the Human Rights Campaign, explaining how his quest began three years ago, when he wanted to go with his boss to give blood after a natural disaster. As he explains, "While I was healthy as could be, I could not donate due to the fact that I was gay. I had to explain the situation to everyone in my department. For the first time in my life, I felt like I was being treated differently solely on the basis of my sexual orientation - it felt alienating, it felt wrong, but above all - it felt unnecessary." Excluding gay and bisexual men from giving blood – especially when a simple blood test and waiting period would eliminate the need for categorizing individual donors as at risk – perpetuates a stigma that activists have spent 30 years fighting against. A man who has been intimate with another man is not an automatic threat to the blood supply. Medical science bears that out. So it's disappointing that an FDA representative just last year categorized homosexual behavior as falling into the same category as "intravenous drug abusers and commercial sex workers."

It's pretty simple – so simple even a United States government agency could understand it. There is a constant demand for blood. In times of catastrophes, there is an urgent demand for it. ABC News reported last year that our country has in recent months faced "one of the worst ones that the Red Cross has seen." To continue to exclude people despite the entirely reasonable arguments of the organizations that supply blood themselves is both discriminatory to them and harmful to everybody. As Yezak explains, "This ban affects everyone. 41,000 blood donations are needed every day. Someone needs a blood donation every two seconds in the U.S., and you never know when that someone is going to be you." And though this year marks the second blood drive of its kind, let's hope it's the last one needed to change the FDA's mind.