The American Century is over: How our country went down in a blaze of shame

We face a triple crisis in foreign policy, economics and democracy. Here's how it all went to hell 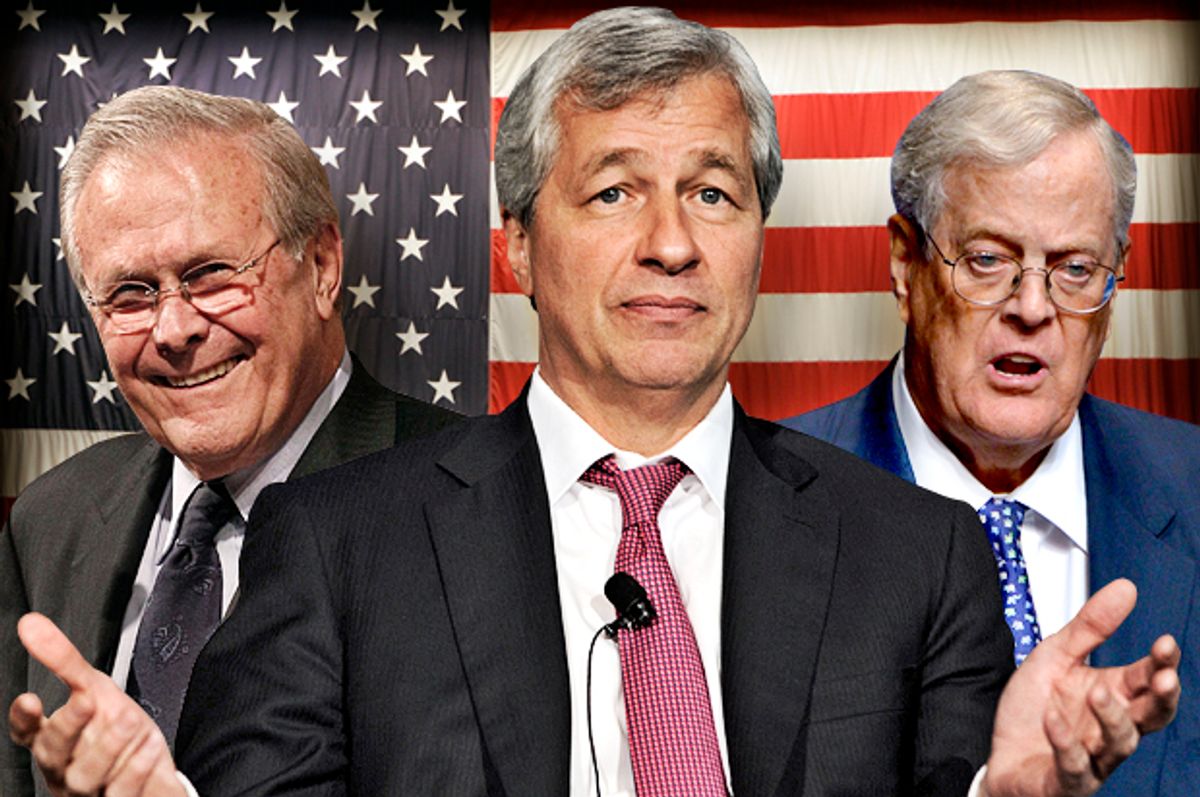 A hundred years ago, World War I marked the emergence of the U.S. as the dominant world power. Already by the late nineteenth century, the U.S. had the world’s biggest economy. But it took the First World War to catalyze the emergence of the U.S. as the most important player in geopolitics. The U.S. tipped the balance against Imperial Germany, first by loans to its enemies after 1914 and then by entering the war directly in 1917.

Twice more in the twentieth century the U.S. intervened to prevent a hostile power from dominating Europe and the world, in World War II and the Cold War. Following the end of the Cold War, America’s bipartisan elite undertook the project of creating permanent American global hegemony. The basis of America’s hegemonic project was a bargain with the two major powers of Europe, Germany and Russia, and the two major powers of Asia, Japan and China. The U.S. proposed to make Russia and China perpetual military protectorates, as it had already done during the Cold War with Germany and Japan. In return, the U.S. would keep its markets open to their exports and look after their international security interests.

This vision of a solitary American globocop policing the world on behalf of other great powers that voluntarily abandon militarism for trade has been shared by the Clinton, Bush 43 and Obama administrations. But by 2014 the post-Cold War grand strategy of the United States had collapsed.

China and Russia have rudely declined America’s offer to make them subservient military satellites, like Japan and Germany.  China has been building up its military, engaging in cyber-attacks on the U.S., and intimidating its neighbors, to promote the end of American military primacy in East Asia.

Meanwhile, Russia has responded to the expansion of the U.S.-led NATO alliance to its borders by going to war with Georgia in 2008 to deter Georgian membership in NATO and then, in 2014, seizing Crimea from Ukraine, after Washington promoted a rebellion against the pro-Russian Ukrainian president.

There are even signs of a Sino-Russian alliance against the U.S. The prospect excites some neoconservatives and neoliberal hawks, who had been quiet following the American military disasters in Iraq and Afghanistan. But in a second Cold War against a Sino-Russian axis, the European Union, with its economy comparable to America’s, will not provide reliable support. Russia is a nuisance, not a threat to Europe. China doesn’t threaten Europe and Europeans want Chinese trade and investment too much. In Asia, only a fool would bet on the ability of a ramshackle alliance of the U.S., Japan, the Philippines, Vietnam and Australia to “contain” China.

The U.S. military was able to destroy the autocratic governments of Afghanistan, Iraq and Libya — but all the foreign policy agencies of the U.S. have been unable to help create functioning states to replace them. Since 2003, Uncle Sam has learned that it is easier to kick over anthills than to build them.

In addition to having a huge military that for the most part can neither intimidate strong adversaries nor pacify weak ones, America has an economy that for decades has failed to deliver sustained growth that is widely shared.

Apart from a revival of oil and gas production in the U.S., the economy’s main area of comparative strength has been technological innovation. The rise of self-driving vehicles and the “internet of things” are promising developments. But these mostly involve the extension of existing information technology to new sectors. The American tech economy has been living on intellectual capital accumulated before the 1980s, when the Defense Department funded the early breakthroughs in information technology. Compared to earlier breakthroughs like transistors and satellites, most of today’s innovations are trivial and contribute little or nothing either to living standards or national industrial power: “Hey, give me a billion dollars for my app that tells you when to pick up your laundry!”

The picture is even bleaker when we turn our gaze from Silicon Valley to the rest of the American economy. The manufacturing sector has been decimated by subsidized imports from China, Japan and other mercantilist countries, and by the decisions of many American multinationals to shut down American factories in order to exploit cheap labor and take government subsidies in other lands. America’s infrastructure is decrepit, but Congress cannot even agree about how to fund the aging interstate highway system, much less invest in twenty-first century transportation and communications systems. Most of the jobs being created in the U.S. are in the low-wage, non-union, no-benefit service sector where millions are trapped in the status of the “working poor.”

Among the biggest beneficiaries of the current American economic system are not entrepreneurs or innovators, but parasites who owe their wealth to rigged markets or government subsidies. The “parasite load” in the U.S. economy includes many in the financial industry who expect that the federal government will socialize their losses but let them keep their profits — profits taxed at low rates, or hidden from taxation altogether. Other parasitic special interests include the predatory monopolies of America’s health care sector — the pharma industry, which charges Americans far more for the same drugs than it is allowed to charge in Canada, Europe or Asia; physicians, who tend to be paid much more in the U.S. than in other countries with comparable health outcomes; and price-gouging hospitals. Much of America’s higher education industry, too, is riddled with parasites, including bankers who profit from lifelong debt serfdom by Americans who take out student loans and empire-building university administrators who fund personal entourages with public and private money.

Suppose a delegation from a developing country were to visit various First World nations in search of models. What on earth could the U.S. teach them? How to enrich bankers who add little or no value to the economy? How to ensure that citizens pay far more for medical goods and services that cost much less everywhere else? How to make citizens go into debt to get an education? How to import multitudes of poor foreign workers to compete with native workers, even though the country is suffering from massive and persistent underemployment? How to allow many employers to pay wages so low that workers are forced to use public welfare services to survive?

All right, let it be stipulated that the world’s greatest military hasn’t been very successful either at intimidating other great powers like China and Russia or frightening warlords in Mad Max wastelands into obedience. And let’s concede that any country that chose the post-1980s U.S. economic system as its model would be certifiably suicidal. Aren’t we still the world’s greatest liberal democracy?

The U.S. remains a paragon of liberalism and democracy compared to many foreign dictatorships and anarchies, of course. But the proper comparison is with other advanced industrial democracies. By that test, current American democracy offers little for Americans to take pride in.

Personal freedom? These days, Europeans insist on far more protections for individual privacy against government surveillance or corporate exploitation of our data than we Americans have been. While most civilized countries long ago abolished the death penalty, the U.S. has recently been among the world’s leaders in executions, surpassed only by Iraq, Saudi Arabia, Iran and China. For the most part, we allegedly freedom-loving Americans can’t be bothered to protest government data mining, corporate data mining and the occasional mistaken execution of innocent Americans by bungling state governments.

Elections? The U.S. still uses the unfair British colonial era plurality voting system, long jettisoned by most modern democracies in favor of alternatives like proportional representation. Partisan state legislatures cynically gerrymander districts to favor the party in power in the state capital. Having been captured by the neo-Confederate White Right, the Republican Party in one state after another is trying to change voting laws to minimize voting by disproportionately black and Latino low-income voters. And politicians of both parties have to grovel and scrape before a small number of billionaires, in order to win in the “money primary” that weeds out politicians who can’t find some hedge fund manager or casino owner to bankroll them.

I do not mean to imply that other societies are doing much better than the U.S. at the moment. The European Union is suffering from a self-inflicted austerity policy disaster, China under its kleptocratic Communist Party is facing slowing growth and popular discontent, and so on.  The end of the American Century won’t be followed by the Chinese Century or the European Century. The emergence of a multipolar world means it won’t be anybody’s century.

With two lost wars in a decade, a stalled economy choked by parasitic lobbies and a political system dominated by billionaires, you would think there would be a sense of crisis in America. But neither party is willing to acknowledge the severity of our problems, much less contemplate the radical structural changes that are necessary to address them.

Those on the right who denounce “crony capitalism” perversely tend to focus on government aid to a productive industry like the Export-Import Bank, while averting their gaze from the most egregious examples of economic parasitism — finance-industry predators and the predatory medical-industrial complex. For their part, neoconservatives are in complete denial about the limits to American power illustrated by the debacles in Iraq, Afghanistan, Libya and, earlier, Vietnam. (To be sure, we did defeat Grenada and Panama).

The mainstream Clinton-Obama Democrats, whose politics is a legacy of the booming 1990s, are also unable to acknowledge how bad things really are. Admitting that American foreign and domestic policies for decades have almost completely failed to achieve their stated goals would tend to cast doubt on the record of the two Democrats, Bill Clinton and Barack Obama, who have occupied the White House for four of the six presidential terms since the 1992 election. Instead, many mainstream Democrats would have us believe that all that is needed to fix essentially sound foreign and domestic policies is a Democratic congressional supermajority and a few tweaks — a bit more multilateralism and foreign burden-sharing in foreign policy, slightly bigger subsidies for low-income households at home.

The U.S. is facing a triple crisis — a crisis of foreign policy, a crisis of economics and a crisis of democracy. The American republic has renewed and rebuilt itself during even greater crises in the past, and can do so again. But the first step is to drop the happy talk and chest-thumping and flag-waving and be honest with ourselves about the severity of the problems confronting us.