"I wasn't left alone to run amok": Stephen Falk on writing for "OITNB" -- and becoming a showrunner

Falk on creating FX's "You're the Worst," the appeal of British humor, and making TV that looks like film 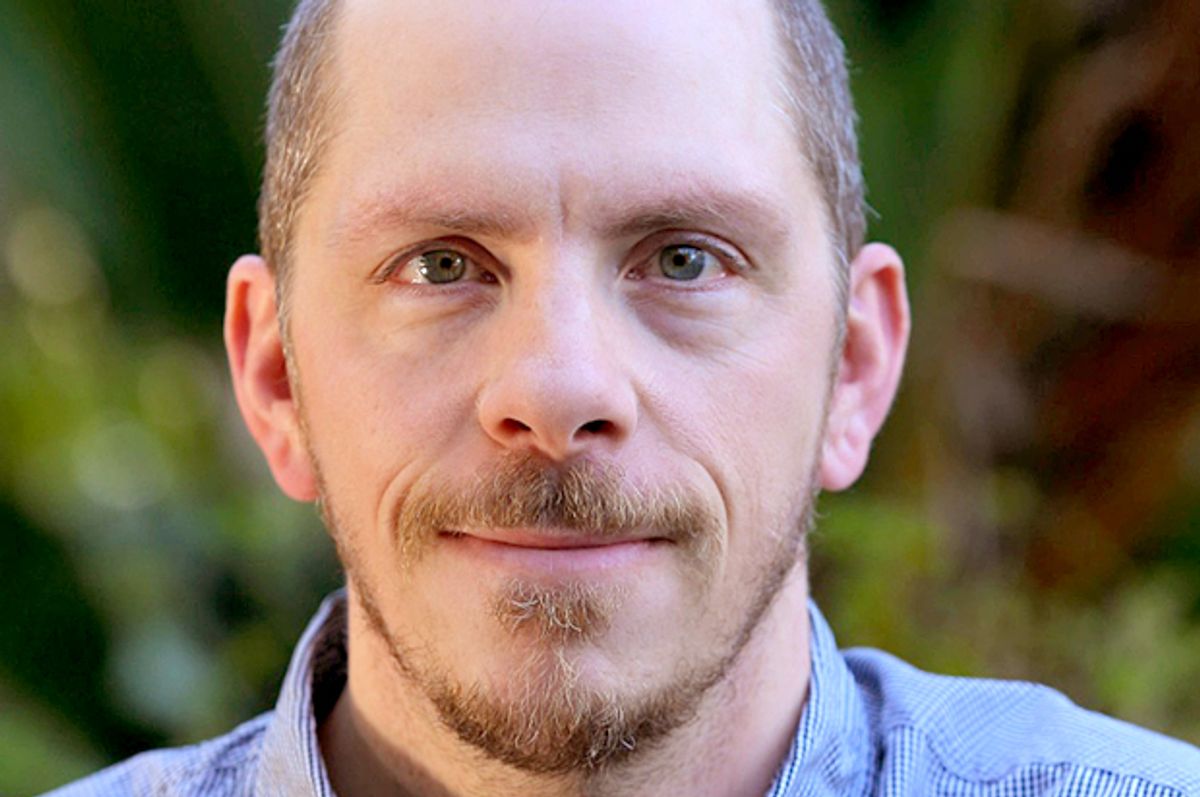 Stephen Falk, a writer and producer for the last two seasons on the Emmy-nominated Netflix hit "Orange Is the New Black," left prison life behind for the summer to create the racy romantic comedy "You’re the Worst." The show begins as a conventional rom-com — the two leads meet at a wedding —  but then veers into more contemporary territory. You’re never quite sure if these two are a perfect pair of nihilists or if their mutual lack of empathy is masking something deeper, and I don’t think they’re sure either.

Falk took a few minutes away from filming the series, which debuts Thursday on FX, to talk to Salon about the appeal of British humor, TV that looks like film, and working with Jenji Kohan.

You worked on both "Weeds" and "Orange Is the New Black" — neither of which are network-style, setup/punch line comedies. Would you even call them comedies?

I would definitely call "Weeds" a comedy; it had dramatic elements at times, but it was definitely a comedy. "Orange Is the New Black" — for Emmy-voting purposes — Netflix has decided it’s a comedy. I kind of have always thought the idea of half-hours as comedies and hours as dramas was kind of arbitrary, so I think the designation is a little amorphous and a little meaningless at this point. I’m not sure it applies anymore.

Would you say "Bridesmaids" and "Superbad" have a similar comic sensibility — bigger set pieces and the humor coming more from situations than setup/punch line jokes?

I don’t know if I’d put a direct line from Judd Apatow to Jenji Kohan, but I do see what you mean that they lack the vaudeville, setup/punch line comedy. But comedy these days is more sophisticated and more about character than wacky situations and funny wordplay.

"You’re the Worst" doesn’t remind me of those kinds of movies, but it looks like a movie, so I wondered whether you had looked to movies like "Bridesmaids" and "Superbad" for the show’s visual vocabulary.

FX isn’t necessarily spending the most money of any network on comedies. They’re very smart. They do things on a budget. When I got the green light to make a pilot, my nightmare scenario was that I’d make a half-hour comedy that looked like a cheap network comedy, so I sought to elevate the visual style and chose the director [Jordan Vogt-Roberts] and the DP [director of photography Ross Riege] straight out of Sundance with a film called "The Kings of Summer." It has a lot of comedic elements — Nick Offerman and Megan Mullally were in it — but it’s not necessarily straight comedy.

I knew if I combined what I thought was a strong enough script for "You’re the Worst" with some filmmakers who knew not only how to direct comedic actors but how to make things look dynamite on a budget, I thought that would be a nice combination. I thought it might be weird, and it is weird at times. Sometimes we have a more filmic style than you would think for a half-hour cable show, but for me it was important even if it may be a little strange at first.

The face-up style of sexual humor reminded me more of British comedies like "Inbetweeners" or "Coupling" than American comedies. Were those shows you thought about?

I think that’s astute. I sold the show when I went to FX as a cable-y, British-y version of "Mad About You" for the current generation. I grew up watching British sitcoms going back to "Benny Hill" and "Are You Being Served?" and shows like that.

"Shameless," absolutely. "Inbetweeners," "Coupling," "Spaced," "The IT Crowd." There’s a lot of British shows that I admire. British comedy can be incredibly broad, but there tends to be a sensibility that allows for characters to behave in ways that I think American networks are afraid of. They can be very rude and sexually ambiguous or experimental, and kind of dark. You can do things on British TV that I really admire, so that’s one of the stronger influences for "You’re the Worst."

There are some romantic comedy film tropes in the pilot — the wedding setup, the oddball best friends, the aw-shucks male lead with a British accent. Were you trying to invert romantic comedy tropes, or were those just elements that worked story-wise?

I don’t think I necessarily set out to show what people do in romantic comedies and then twist them. I think they exist in the romantic comedy genre for a reason. It’s a genre I love. I do put ["You’re the Worst"] in the category. My intention was to make a romantic comedy but maybe from a slightly more cynical view.

For me, hopefully, the way I subvert the tropes is, for example, they both have the supportive best friends. But as the season goes on, we really dig into their lives. They become their own characters. Everyone is the protagonist of their own story; no one is a sidekick.

Noah Hawley, who created "Fargo," has talked about FX in general and FX president John Landgraf in particular being very open creatively to a showrunner’s vision for a project. How was the development on "You’re the Worst"?

My development was remarkably smooth. I wasn’t completely left alone to run amok; John and his team certainly have input and strong points of view, but they trust the creators and let them do their job. It sounds corny and cliché to say it’s been a dream, but it really has.

I did a show for NBC ["Next Caller"] a couple of years ago, and they seemed to operate from a place of fear, which led them to feel like they needed to watch very closely. I didn’t get a sense that they really trusted me, which maybe was fair. I had not been a showrunner before. FX and Netflix are operating from a place of success, and success coming out of creative freedom breeds more stomach for risk-taking. I think you see that on FX, and I have certainly felt as creator and showrunner of "You’re the Worst," that they trust me. But they’re not afraid to speak up when they think I can use some guidance on something, and I appreciate that.

Did you have either Chris Geere or Aya Cash attached as leads from the beginning, or did you have auditions for both of those parts?

No, I just came in with a script. I came in, pitched the show, FX said go write it, and then we started casting. I knew of Aya beforehand; she was in a short-lived show called "Traffic Light" on Fox, and I had seen her in some New York theater and always liked her.

Chris just came to me on an audition tape from London. He had been in some British shows that people are not as aware of here, but the casting community knew about him. The minute he opened his mouth — even though I didn’t write the Jimmy character as being British — I knew this was the guy.

Did Chris Geere’s character work out differently on-screen than the American character you wrote?

I realized that, without trying, I had written a British character. The character’s very verbal and says things an American couldn’t get away with.

Did you try him with an American accent?

His American accent is atrocious! I ask him to do it to make me laugh because it’s just so bad. Likewise, he thinks my British accent is pretty terrible.

The two leads present themselves as without conscience on sex and relationships, and I thought the split-screen shot near the end of the pilot challenged them on that. Was that shot in the script?

Yeah. It was in the script as split-screen, which is potentially a dangerous and hacky thing to do, but the director and DP and I found a way to make it visual and visceral. I don’t think these two characters would be able to show the vulnerability if they were in front of each other in that scene that they can when they know they’re alone. They can smile to themselves, but showing it to the other character would be too scary.

You wrote the Valentine’s Day episode this season on "Orange Is the New Black," which was the Poussey back story. Are the back stories of the supporting characters on that show part of the season outline, or do you get a lot of latitude to build those from scratch?

Jenji Kohan’s aim is always to broaden the world and point a magnifying glass in the dark corners where you’re not always looking to fill out the world of a women’s prison. The way we work [on "Orange Is the New Black"], the writing staff gets together here in L.A. and plots out the major things that will be happening with the major characters. And within that we start to decide whose back stories we think would be interesting stories to tell.

Poussey was more of a secondary character the first two seasons, but she’s been upped to regular for the third season. And thank God — Samira Wiley is brilliant. Working with her is amazing. I made her learn German for that episode! She’s a Juilliard-trained actress, and she is just brilliant. That was one of the more fun experiences I have had in TV.

With the scheduling for your show, you’re not going to be able to work any on "Orange Is the New Black" for Season 3?

No, I’m not doing Season 3 at all. They’re shooting Episode 5 or 6 already. But if ["You’re the Worst"] fails, maybe I can go back to Jenji and ask to rejoin!