William Zabka: 30 years later, the "Karate Kid" cast is like a frat

The actor who played Johnny Lawrence on "The Karate Kid," his recent TV cameos, the nickname Mr. Miyagi gave him 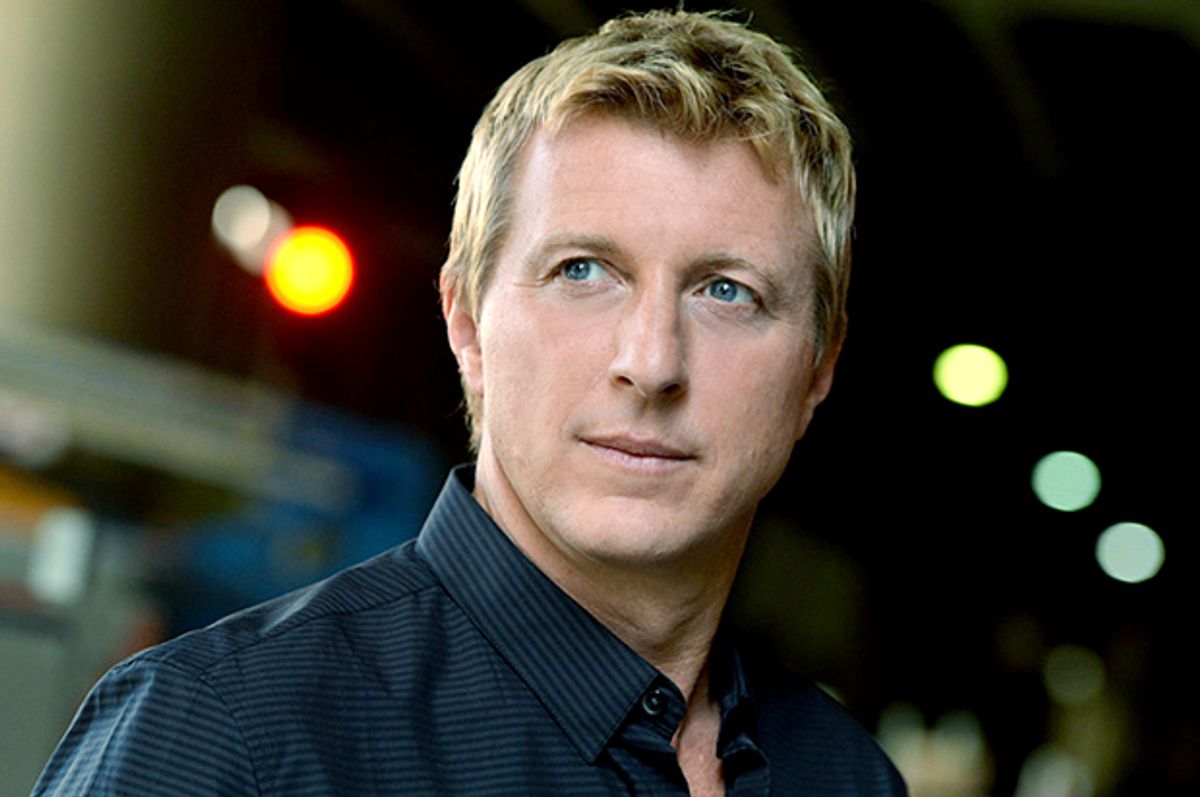 More recently, Mr. Zabka has built a side career on satirizing the villain he brought to life: Parts in “Hot Tub Time Machine” and the TV series “Psych” and “How I Met Your Mother” have Zabka transforming former BMOC Johnny into a hilarious also-ran, a sly commentary on the silliness of the Reagan-era success he embodied.

Salon spoke to Zabka about his 2004 Oscar nod, the long shadow of "The Karate Kid," and the challenges of playing a former version of himself.

Looking at your roles in “Psych” and “How I Met Your Mother,” how do you prepare for a part that satirizes an earlier version of yourself?

As an actor, you’re always trying to outrun your shadow. When I was asked to play a washed-up version of Johnny Lawrence in “No More Kings”’s “Sweep the Leg” music video in 2007, the only way I’d agree was if I could write, direct it and control the story myself.

The first part of preparation comes in choosing selectively. I get offered a fair amount of  “make fun of Johnny” roles and I only take a few. “Hot Tub Time Machine” and “Psych” and “How I Met Your Mother” were just shows with great writing, great people.

There’s always a little bit of an advantage with satire in that you aren’t building the character from scratch. The backstory is you. Which makes it easy for me an actor to be in the moment right away. I still wouldn’t call it easy but has been a comfortable place for me.

A lot of your characters are athletically inclined. But your guest-starring spot in “Psych” this past season was a kind of ironic backhand to that idea.

I played coach Derek Bagg (D Bagg for short), who used to be a star athlete but then had a Horrible ATV accident and now was stuck coaching third-graders. He was probably drunk off his butt when it happened but that was part of why he got stuck in this job, kind of a negative carbon copy of Johnny Lawrence and where guys like him end up, behind a desk, remembering too much who they used to be, bitter and angry about it.

Neil Patrick Harris went through a similar process of self-satire with “Harold and Kumar Go to White Castle.” Did you guys ever talk about this while you worked together?

No actually, we never did talk about it. But knowing that he had done it too — I know he appreciated the challenges. The first table read I showed up for there were cards which each actor’s name and their character, Neil Patrick Harris, Barney Stinson; Allyson Hannigan, Lilly. Mine said William Zabka, Self. I thought: How the hell am I sitting in this seat?

When (“HIMYM” co-creator) Craig Thomas first got in touch with me, he just said he had a dream that Barney thought I was the real Karate Kid. And initially I was supposed to appear in clown makeup, Barney would recognize me as Billy Zabka and that would be the gig. Even when they decided to have me on the rest of the season I had no idea where my character was going script to script. They could have driven me off a cliff, I wouldn’t have known. But I wouldn’t have minded either.

And rewatching “The Karate Kid,” I felt a lot more sympathy for your character, particularly near the movie’s end when we realize whom the real villain is.

I’ve heard many people say “How I Met Your Mother” ruins “The Karate Kid” for them. They can’t see Johnny as the villain anymore.

That now legendary “sweep the leg” scene only works because of the look of horror in Johnny’s eyes — you realize that Johnny, instead of just an entitled jerk, is also a very scared kid.

[Screenwriter] Robert Kamen wanted that moment and we rehearsed it for weeks. But when it came to shooting it, Marty Kove (evil head of the Cobra, Kai John Kreese) delivered “Sweep the leg” and the veils come off my eyes — my reaction was organic. In rehearsal, Marty had spoken much more calmly and Johnny said “Yes, Sinsae” right away. But that moment, with the crowd roaring, felt like an actual tournament, intense and real. You see how afraid Johnny is. And then comes “the enemy deserves no mercy.” And that flips the switch. Johnny is a blackbelt with all of the programming and training that goes into that. And when he gets back in the ring, he’s on autopilot, he’s possessed.

In the film’s commentary, Ralph Macchio mentions that the last scene wouldn’t have worked had you not “sold” the crane kick.

I wouldn’t say I had planned for it in any special way. And it’s important to remember that the scene couldn’t have worked without great editing and directing and Bill Conti’s music. I can’t take credit for every nuance.

That last moment was shot with both wide masters of Ralph and I and the crowd and close-ups of a foot hitting my nose. The filmmakers knew that scene had a high potential for injury so we shot chronologically, with that being the very last thing I did. Because we were at the end of the shoot, I felt like wasn’t carrying any baggage from the rest of the story. And there was a lot of freedom in that.

But when I hand Ralph the trophy and say “You’re alright, LaRusso,” well, that was a lot less emotional in rehearsal. But once we were there, that wasn’t a moment we had prepared for. That's one moment that was lived.

Your 2004 short film “Most,” which you produced and wrote, was nominated for an Academy Award. How did the idea for this film come about?

It was the story that had affected me profoundly as a kid. A father operates a bridge. His son visits him at work and falls into the gears of the bridge as it is lowering and he has to keep lowering the bridge with son stuck in it as a train is coming over the bridge. The story apparently happened in Mississippi in the 1930s.

We scouted eight countries and shot the film in the Czech Republic and in Poland a few weeks after 9/11. And while we were in, someone told my partner and I that the exact same story had happened in Poland in recent years.

An independent film called “Produce” that will be out soon, about a kid with Down’s Syndrome who befriends an alcoholic ex-baseball player. I play the baseball player’s alcoholic friend.

Do you keep in touch with the folks from “Karate Kid”?

Yeah, we’re kind of a fraternity. Ralph and I have become better friends in recent years, first from me calling him out of the blue to work on the “Sweep the Leg” video with me. We also reconnected in 2008 at Pat Morita’s (Mr. Miyagi’s) memorial. The Cobra Kai guys I’ve stayed in touch the whole time. And Pat we were all very close to. We called him Uncle Pat. He called me BZ.

“The Karate Kid” is a family. Like family, you don’t talk every day. But when you do, you pick right back up. And I can’t really imagine my life without it.

Given how the phrase “sweep the leg” has entered the language of American pop culture, the character of Johnny Lawrence is almost mythic now — even bigger than the actor who brought him to life!

It’s incredibly challenging to compete with yourself [laughs]. But we were just at a panel after a screening of the movie for its 30th anniversary and someone asked [director] John Avildsen how I created Johnny Lawrence. John said “Billy didn’t create him. Robert Kamen created him, Billy personified him and I directed him.” And that was liberating, really.

But I also know that right now some new kid is being introduced to Johnny and Daniel and the Cobra Kai and Mr. Miyagi. And as an actor, you want to have an impact on culture. And it’s a complete honor and thrill to be part of something that impacts culture.