"Alive Inside": Music may be the best medicine for dementia

A heartbreaking new film explores the breakthrough that can help severely disabled seniors: It's called the iPod 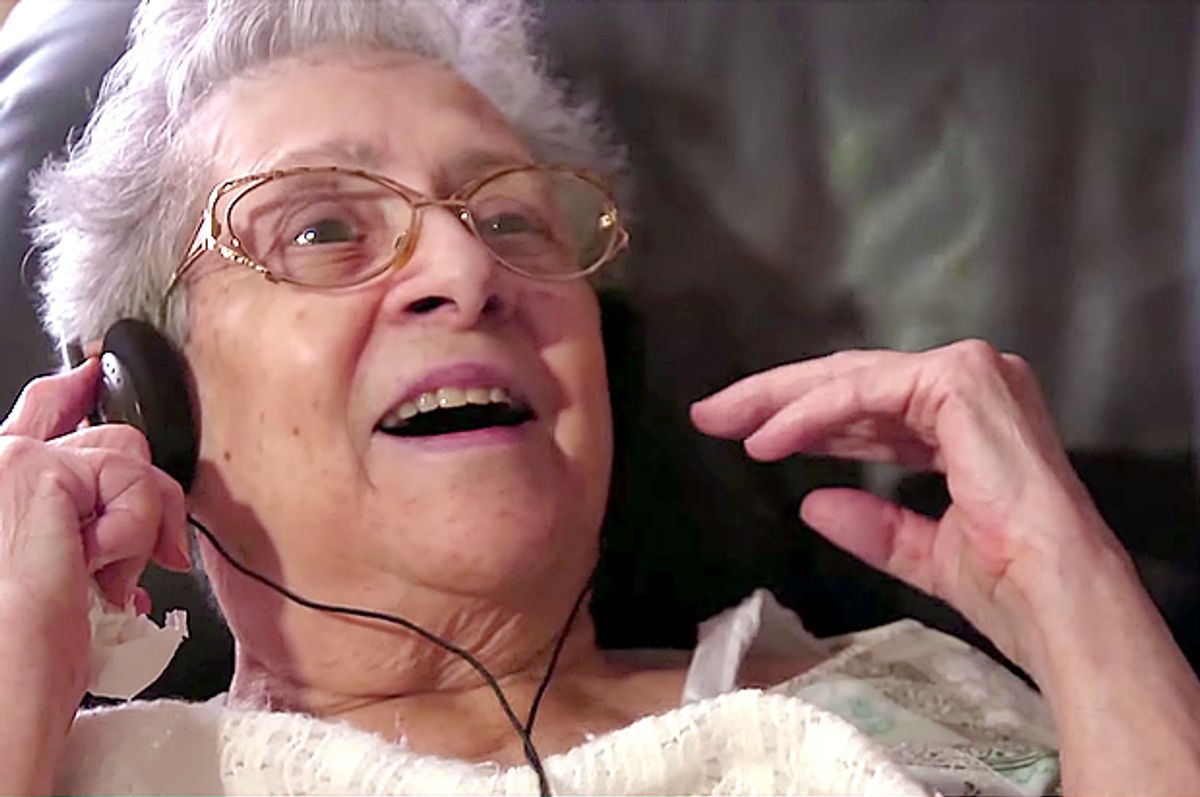 One physician who works with the elderly tells Michael Rossato-Bennett’s camera, in the documentary “Alive Inside,” that he can write prescriptions for $1,000 a month in medications for older people under his care, without anyone in the healthcare bureaucracy batting an eye. Somebody will pay for it (ultimately that somebody is you and me, I suppose) even though the powerful pharmaceutical cocktails served up in nursing homes do little or nothing for people with dementia, except keep them docile and manageable. But if he wants to give those older folks $40 iPods loaded up with music they remember – which both research and empirical evidence suggest will improve their lives immensely -- well, you can hardly imagine the dense fog of bureaucratic hostility that descends upon the whole enterprise.

“Alive Inside” is straightforward advocacy cinema, but it won the audience award at Sundance this year because it will completely slay you, and it has the greatest advantages any such movie can have: Its cause is easy to understand, and requires no massive social change or investment. Furthermore, once you see the electrifying evidence, it becomes nearly impossible to oppose. This isn’t fracking or climate change or drones; I see no possible way for conservatives to turn the question of music therapy for senior citizens into some kind of sinister left-wing plot. (“Next up on Fox News: Will Elton John turn our seniors gay?”) All the same, social worker Dan Cohen’s crusade to bring music into nursing homes could be the leading edge of a monumental change in the way we approach the care and treatment of older people, especially the 5 million or so Americans living with dementia disorders.

You may already have seen a clip from “Alive Inside,” which became a YouTube hit not long ago: An African-American man in his 90s named Henry, who spends his waking hours in a semi-dormant state, curled inward like a fetus with his eyes closed, is given an iPod loaded with the gospel music he grew up with. The effect seems almost impossible and literally miraculous: Within seconds his eyes are open, he’s singing and humming along, and he’s fully present in the room, talking to the people around him. It turns out Henry prefers the scat-singing of Cab Calloway to gospel, and a brief Calloway imitation leads him into memories of a job delivering groceries on his bicycle, sometime in the 1930s.

Of course Henry is still an elderly and infirm person who is near the end of his life. But the key word in that sentence is “person”; we become startlingly and heartbreakingly aware that an entire person’s life experience is still in there, locked inside Henry’s dementia and isolation and overmedication. As Oliver Sacks put it, drawing on a word from the King James Bible, Henry has been “quickened,” or returned to life, without the intervention of supernatural forces. It’s not like there’s just one such moment of tear-jerking revelation in “Alive Inside.” There might be a dozen. I’m telling you, one of those little pocket packs of tissue is not gonna cut it. Bring the box.

There’s the apologetic old lady who claims to remember nothing about her girlhood, until Louis Armstrong singing “When the Saints Go Marching In” brings back a flood of specific memories. (Her mom was religious, and Armstrong’s profane music was taboo. She had to sneak off to someone else’s house to hear his records.) There’s the woman with multiple psychiatric disorders and a late-stage cancer diagnosis, who ditches the wheelchair and the walker and starts salsa dancing. There’s the Army veteran who lost all his hair in the Los Alamos A-bomb test and has difficulty recognizing a picture of his younger self, abruptly busting out his striking baritone to sing along with big-band numbers. “It makes me feel like I got a girl,” he says. “I’m gonna hold her tight.” There’s the sweet, angular lady in late middle age, a boomer grandma who can’t reliably find the elevator in her building, or tell the up button from the down, boogieing around the room to the Beach Boys’ “I Get Around,” as if transformed into someone 20 years younger. The music cannot get away from her, she says, as so much else has done.

There’s a bit of hard science in “Alive Inside” (supplied by Sacks in fascinating detail) and also the beginnings of an immensely important social and cultural debate about the tragic failures of our elder-care system and how the Western world will deal with its rapidly aging population. As Sacks makes clear, music is a cultural invention that appears to access areas of the brain that evolved for other reasons, and those areas remain relatively unaffected by the cognitive decline that goes with Alzheimer’s and other dementia disorders. While the “quickening” effect observed in someone like Henry is not well understood, it appears that stimulating those undamaged areas of the brain with beloved and familiar signals – and what will we ever love more than the hit songs of our youth? -- can unlock other things at least temporarily, including memory, verbal ability, and emotion. Sacks doesn’t address this, but the effects appear physical as well: Everyone we see in the film becomes visibly more active, even the man with late-stage multiple sclerosis and the semi-comatose woman who never speaks.

Dementia is a genuine medical phenomenon, as anyone who has spent time around older people can attest, and one that’s likely to exert growing psychic and economic stress on our society as the population of people over 65 continues to grow. But you can’t help wondering whether our social practice of isolating so many old people in anonymous, characterless facilities that are entirely separated from the rhythms of ordinary social life has made the problem considerably worse. As one physician observes in the film, the modern-day Medicare-funded nursing home is like a toxic combination of the poorhouse and the hospital, and the social stigma attached to those places is as strong as the smell of disinfectant and overcooked Salisbury steak. Our culture is devoted to the glamour of youth and the consumption power of adulthood; we want to think about old age as little as possible, even though many of us will live one-quarter to one-third of our lives as senior citizens.

Rossato-Bennett keeps the focus of “Alive Inside” on Dan Cohen’s iPod crusade (run through a nonprofit called Music & Memory), which is simple, effective and has achievable goals. The two of them tread more lightly on the bigger philosophical questions, but those are definitely here. Restoring Schubert or Motown to people with dementia or severe disabilities can be a life-changing moment, but it’s also something of a metaphor, and the lives that really need changing are our own. Instead of treating older people as a medical and financial problem to be managed and contained, could we have a society that valued, nurtured and revered them, as most societies did before the coming of industrial modernism? Oh, and if you’re planning to visit me in 30 or 40 years, with whatever invisible gadget then exists, please take note: No matter how far gone I am, you’ll get me back with “Some Girls,” Roxy Music's "Siren" and Otto Klemperer’s 1964 recording of “The Magic Flute.”