In 2007, I invented the term in a review. Then I watched in queasy disbelief as it seemed to take over pop culture 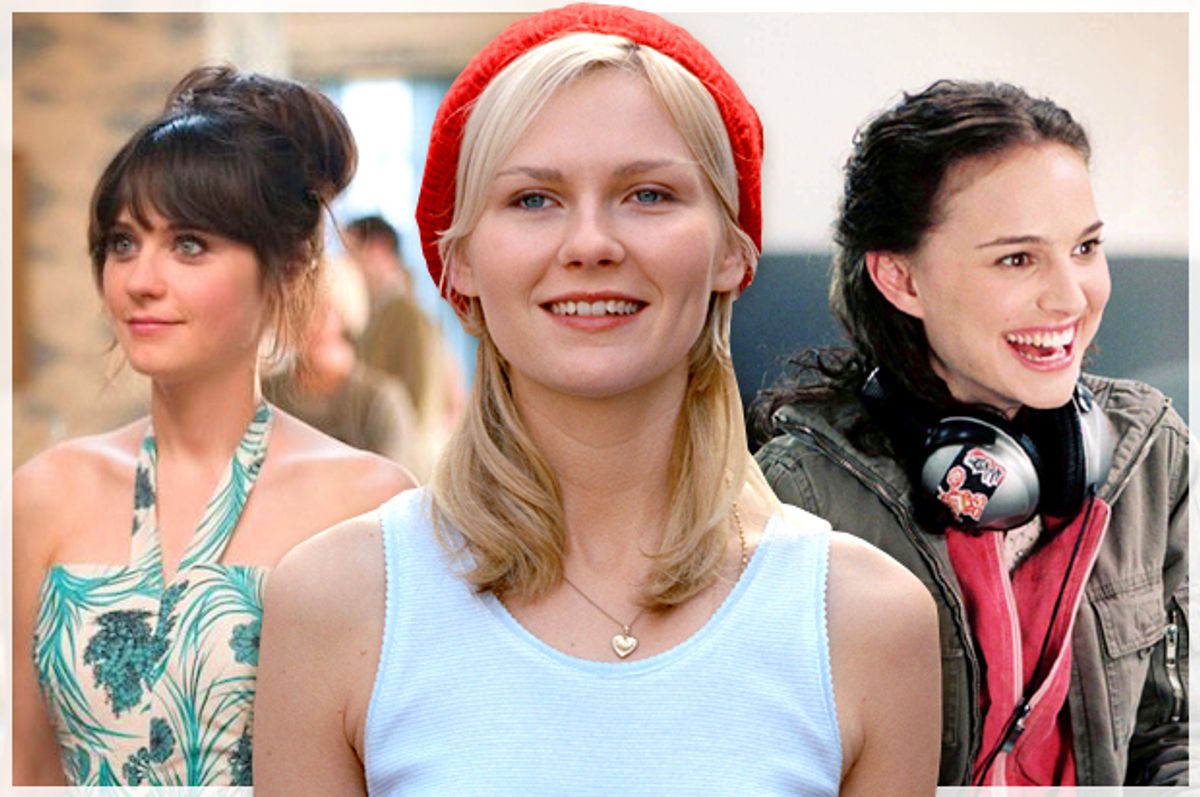 When I coined the term “Manic Pixie Dream Girl” in an essay about the movie “Elizabethtown” in 2007, I never could have imagined how that phrase would explode. Describing the film’s adorably daffy love interest played by Kirsten Dunst, I defined the MPDG as a fantasy figure who “exists solely in the fevered imaginations of sensitive writer-directors to teach broodingly soulful young men to embrace life and its infinite mysteries and adventures.”

That day in 2007, I remember watching "Elizabethtown" and being distracted by the preposterousness of its heroine, Claire. Dunst's psychotically bubbly stewardess seemed to belong in some magical, otherworldly realm -- hence the "pixie" -- offering up her phone number to strangers and drawing whimsical maps to help her man find his way. And as Dunst cavorted across the screen, I thought also of Natalie Portman in "Garden State," a similarly carefree nymphet who is the accessory to Zach Braff's character development. It's an archetype, I realized, that taps into a particular male fantasy: of being saved from depression and ennui by a fantasy woman who sweeps in like a glittery breeze to save you from yourself, then disappears once her work is done.

When I hit “publish” on that piece, the first entry in a column I called "My Year of Flops," I was pretty proud of myself. I felt as if I had tapped into something that had been a part of our culture for a long time and given it a catchy, descriptive name -- a name with what Malcolm Gladwell might call “stickiness."

But I should clarify a few things here. The trope of the Manic Pixie Dream Girl is a fundamentally sexist one, since it makes women seem less like autonomous, independent entities than appealing props to help mopey, sad white men self-actualize. Within that context, the phrase was useful precisely because, while still fairly flexible, it also benefited from a certain specificity. Claire was an unusually pure example of a Manic Pixie Dream Girl -- a fancifully if thinly conceived flibbertigibbet who has no reason to exist except to cheer up one miserable guy.

The response to my review was pretty positive but relatively sleepy. The A.V. Club was a whole lot smaller back then and the phrase didn’t really gain traction until a year later, when my colleague Tasha Robinson proposed doing a list of Manic Pixie Dream Girls for the “Inventory” feature of our site. The list, published in 2008, was titled “16 films featuring Manic Pixie Dream Girls,” and featured, along with Dunst and Portman, Diane Keaton in “Annie Hall” and Audrey Hepburn in “Breakfast at Tiffany’s.”

I remember thinking, even back then, that a whole list of Manic Pixie Dream Girls might be stretching the conceit too far. The archetype of the free-spirited life-lover who cheers up a male sad-sack had existed in the culture for ages. But by giving an idea a name and a fuzzy definition, you apparently also give it power. And in my case, that power spun out of control.

In the years since I wrote about the MPDG, I’ve been floored by how pervasive the trope has become. At first it was just a few scattered mentions in other critics' reviews. Then Zooey Deschanel strummed a ukulele and became a Hollywood It girl and suddenly the MPDG was everywhere. During one particularly strange day in 2011, I read that Cameron Crowe (the man behind "Elizabethtown," as well as "Almost Famous" and much else) was asked about the phrase and replied, “I dig it ... I keep thinking I’ll run into Nathan Rabin and we’ll have a great conversation about it." This blew my mind. I have been writing about pop culture for a long time but I could honestly not believe that Cameron Crowe knew my name and thought about meeting me someday.

But the more the cultural myth of the Manic Pixie Dream Girl expanded, the more my ambivalence about it grew.  “Manicpixiedreamgirl” became the title of a young adult novel about a teenage boy obsessed with a free-spirited female classmate, something I only learned about when a reader directed me to the book’s Amazon page. The author did not choose the book’s title, I learned in my one exchange with him over Facebook; it was his publisher’s idea. I couldn't bring myself to read it. Critics began coining spinoff tropes like the “manic pixie dream guy." Mindy Kaling name-dropped Manic Pixie Dream Girls in a New Yorker piece on female-centric films. And last year I had the surreal experience of watching a musical called Manic Pixie Dreamland, about a fantasy realm that produces Manic Pixie Dream Girls. Sitting in the dark theater, I thought: "What have I done?!"

Sure, part of it was that by that point, I had begun to feel a little like a one-hit wonder. But I also realized that I didn't recognize the manic pixie anymore. Clearly labels and definitions are inherently reductive. And if you are a critic, labels and names and definitions are a necessary evil. But it's a particular feature of the fast-paced, ephemeral world of online criticism that writers are always seeking quick reference points to contextualize their analysis -- so the rise of the MPDG was in large part a creation of the Internet as well.

And I don’t need much discouraging, even when writing about a fairly clear-cut instance of a Manic Pixie, like Charlize Theron’s impossibly perfect, sexy, supportive gun-slinger in “A Million Ways to Die in the West.” As is often the case in conversations about gender, or race, or class, or sexuality, things get cloudy and murky really quickly. I coined the phrase to call out cultural sexism and to make it harder for male writers to posit reductive, condescending male fantasies of ideal women as realistic characters. But I looked on queasily as the phrase was increasingly accused of being sexist itself.

John Green, for one, felt so passionately about the toxic nature of the trope that in a Tumblr post he declared that his novel "Paper Towns" “is devoted IN ITS ENTIRETY to destroying the lie of the manic pixie dream girl” before adding, “I do not know how I could have been less ambiguous about this without calling (Paper Towns) The Patriarchal Lie of the Manic Pixie Dream Girl Must Be Stabbed in the Heart and Killed.” In an interview with Vulture, “Ruby Sparks” writer-star Zoe Kazan answered a question about whether her character was a Manic Pixie Dream Girl by asserting: “I think it's basically misogynist.” In a later interview, when once again confronted with the dreaded MPDG label, Kazan continued, “I don’t like that term … I think it’s turned into this unstoppable monster where people use it to describe things that don’t really fall under that rubric.”

Here’s the thing: I completely agree with Kazan. And at this point in my life, I honestly hate the term too. I feel deeply weird, if not downright ashamed, at having created a cliché that has been trotted out again and again in an infinite Internet feedback loop. I understand how someone could read the A.V. Club list of Manic Pixie Dream Girls and be offended by the assertion that a character they deeply love and have an enduring affection for, whether it’s Diane Keaton’s Annie Hall or Katharine Hepburn in “Bringing Up Baby,” is nothing more than a representation of a sexist trope or some sad dude’s regressive fantasy.

It doesn't make sense that a character as nuanced and unforgettable as Annie Hall could exist solely to cheer up Alvy Singer. As Kazan has noted, Allen based a lot of Annie Hall on Diane Keaton, who, as far as I know, is a real person and not a ridiculous male fantasy.

So I’d like to take this opportunity to apologize to pop culture: I’m sorry for creating this unstoppable monster. Seven years after I typed that fateful phrase, I’d like to join Kazan and Green in calling for the death of the “Patriarchal Lie” of the Manic Pixie Dream Girl trope. I would welcome its erasure from public discourse. I’d applaud an end to articles about its countless different permutations. Let’s all try to write better, more nuanced and multidimensional female characters: women with rich inner lives and complicated emotions and total autonomy, who might strum ukuleles or dance in the rain even when there are no men around to marvel at their free-spiritedness. But in the meantime, Manic Pixies, it’s time to put you to rest.

Nathan Rabin is a staff writer for the Dissolve and the author of four books, most recently "You Don’t Know Me But You Don’t Like Me," about his experiences following Phish and Insane Clown Posse.