From "True Blood" to "The Strain": Vampire-ifying stories is ruining perfectly good plots

We get it--pop culture is obsessed with the undead. But it's time to drive a stake through the bloodsuckers at last 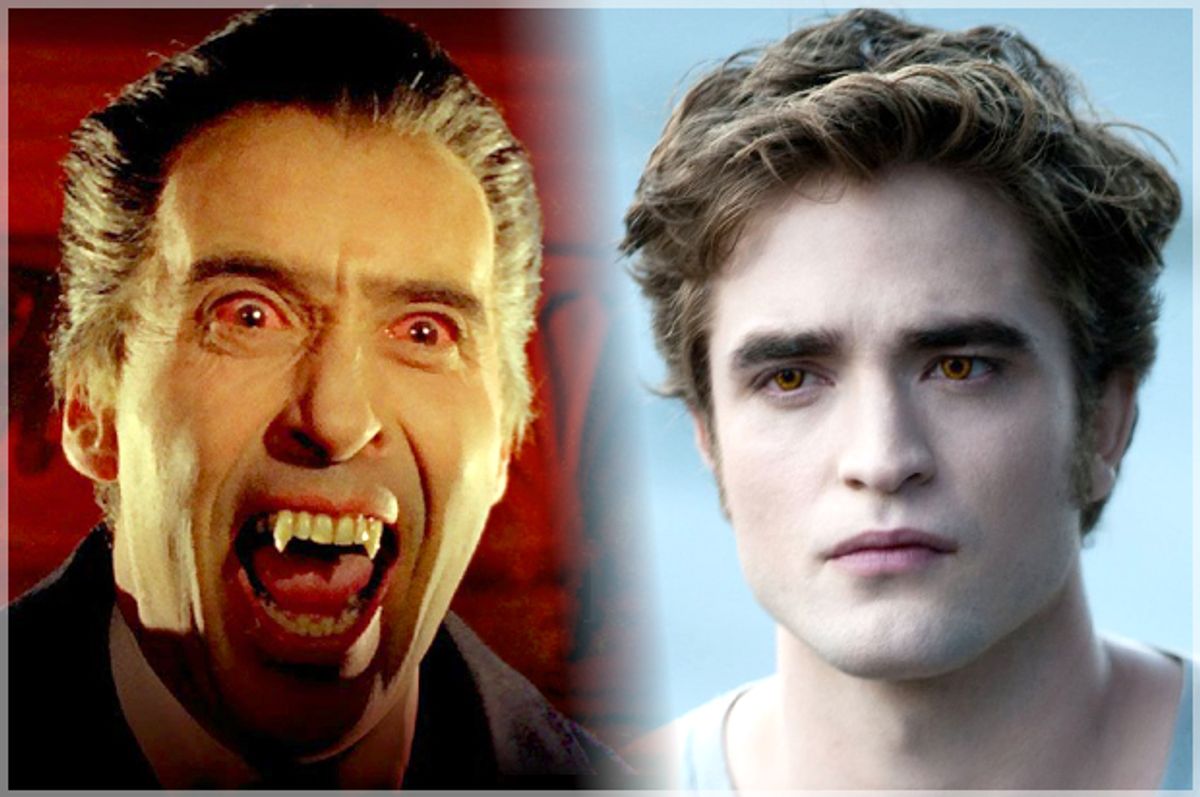 About 100 pages into Lauren Owen's new novel, everything goes to hell. Up to that point, "The Quick" is a persuasively textured and faintly dreamy historical fiction set in 1890s England. It's the story of an orphaned brother and sister of modest means but genteel origins. The brother, James, goes to London to pursue a career as a writer, taking lodgings with Christopher Paige, a dilettantish former classmate from Oxford. In time, the two young men embark on a clandestine affair and contemplate schemes to escape Christopher's controlling aristocratic family. Just as Christopher has persuaded James to deposit a copy of his freshly penned play on the doorstep of Oscar Wilde, a stranger approaches the couple and slaughters them both.

Then James wakes in an upstairs room in a gentlemen's club off St. James Square, chilled to the bone and hungry. Alas, he has been turned into a vampire, and "The Quick" has been transformed from a work that had some fresh blood in it to a device pumping recycled hemoglobin. The novel's second part consists of the diaries of one (appropriately named) Augustus Mould, a scholar recruited by the Aegolius Club to conduct research into the nature, history and limitations of its bloodsucking members. The word "vampire" itself is never used, but all the usual tired rigmarole gets hauled out once again: the vampires' preternatural strength, speed and healing abilities; their susceptibility (or not) to daylight and holy water; their hunting methods, the means used to conceal their existence from humans (aka, "the Quick") and their casual contempt for the living; and their complex and, of course, ruthlessly hierarchal social order.

Vampires have provided contemporary culture with a rich and varied complex of metaphors, and perhaps it's too much to ask that we all consider moving on forthwith. After all, people still haven't tired of that much thinner and less interesting horror trope, the zombie, a piece of gum whose flavor was all chewed out five years ago but that keeps shambling along all the same. The zombie exists for only three reasons: to express horror at faceless, herdlike mass societies; to force characters into isolated and dramatically interesting small groups; and to give gamers an excuse to massacre large numbers of people without even the shadow of a moral qualm.

The vampire, on the other hand, has been exquisitely versatile. It can be sinister or sexy, an intelligent aesthete like the emo vamps of Anne Rice or a monster like the gaunt, taloned Count Orlok of Muranu's classic silent film, "Nosferatu." Because of their closeted identity and unseemly appetites, vampires can be fruitfully likened to homosexuals or drug addicts. A vampire can be evil, good or conflicted, soulless or condemned to live with a tormented awareness of its reprehensible nature, like Angel, the ensouled vamp in Joss Whedon's "Buffy the Vampire Slayer." Vampires can be mercilessly mowed down, by the likes of both Buffy and America's 16th president, or they can be persuaded to attempt an open, shakily respectful coexistence with humanity, like the synthetic-blood-slurping undead of HBO's "True Blood," based (very loosely) on Charlaine Harris' Sookie Stackhouse series. And then there's the juggernaut that is the teen romance division of the vampire nation, headed up by "Twilight" and its countless imitators: "Vampire Academy" and its ilk.

Ironically, it's partly the diversity of the vampire trope that has resulted in it becoming so very tiresome. Zombies come in two basic types: slow (the classic George Romero shufflers) and fast (the zippy, rabid freaks of the sort introduced by Danny Boyle's 2002 film "28 Days Later"). Zombies are simple creatures. They don't speak, want nothing more than to devour human flesh and are invariably killed by the destruction of their heads. You need not even bother to tell your viewers what reanimated them; Romero never really did in "Night of the Living Dead."

Introduce a vampire element into your plot, however, and suddenly you've got a whole lot of 'splaining to do. Do they kill their prey or merely drain us, and is the bloodletting experience horrifically painfully or frankly hot? By what process, exactly, is a living person converted into one of the undead? What relationship then exists between the siring vampire and the newly fledged one? What harms or kills your vampires? A wooden stake through the heart? Silver? Sunlight? Do they sleep in coffins or require, as Bram Stoker's Count Dracula did, some portion of their native soil as a bed? If they pose as human, how do they cover up their longevity and manage their always substantial finances? Can they cross running water (a folkloric limitation most modern storytellers have dropped)? Are they particularly flammable or possessed of an acute sense of smell? Can they take the form of animals or fly? Enter a house uninvited?

Call this the vampire yada yada, and it has become excruciatingly tedious. I'm all for imaginative world-building and even consider myself rather tolerant of the bizarre pedantry it can inspire in fans. (If only as many Americans were as conversant with the history and cultures of the Middle East as they are with the same aspects of Middle-earth.) But vampire mythology mostly comes down to taking a position on the same old points, like whether crucifixes will successfully repel the fiends -- but only if the crucifix holder truly believes! -- etc. (It's a rare vampire story that troubles itself to pursue this curious relationship to traditional religious symbols, beyond superficial logistics, that is.) I finally bailed on "The Quick" when I realized that while I would happily read a fictional exploration of how well-born men engineered same-sex romances in Victorian England, I could not bear to read yet more yada yada on what kills or motivates a vampire.

The controversies within vampire yada yada are equally boring. Take the stance adopted by the producers of "The Strain," a new series on the FX network that combines the mythic nature of vampirism (there's a master vampire scheming to conquer Manhattan) and the body horror of David Cronenberg (this form of vampirism is a parasitical infection spread by oversize pinworms that burrow into its victims' flesh). Showrunner Carlton Cruse (a co-producer of "Lost") told CNN.com that he was drawn by the idea of "reimagining the vampires, going back to the roots of what vampires are -- that they are scary, dangerous creatures." He complained to the Hollywood Reporter that the "genre had gotten soft and romantic," echoing similar remarks made by executive producers Guillermo del Toro and Chuck Hogan, back when they published the novel on which the series was based in 2009.

This argument is, frankly, bullshit. The potential seductiveness of vampires goes all the way to their folkloric roots, which are entangled with the nocturnal, sexually predatory succubi. "The Strain" features several nods to "Dracula," from the ghost plane carrying the creepy casket full of infected soil that establishes "the Master" in Manhattan to the rats that flee the island as soon as it arrives, and Stoker's count could hardly be reduced to the merely scary and dangerous.

"Dracula" was part of the 19th-century British novel's long argument on behalf of the upright, hardworking middle class as the moral superiors of the decadent hereditary aristocracy. (You can see the same point made without recourse to the supernatural in several Dickens novels, especially the early "Barnaby Rudge.") Count Dracula, in addition to being a count, came from the primeval Carpathian Mountains, a place of atavistic urges, like the perplexing erotic desires that powerful, rapacious, alpha-male nobles inspired in middle-class women. All of Dracula's British victims are middle class, and most of them are female, good girls reduced to ravenous blood sluts by his depraved, high-born charms.

Dracula was not the first 19th-century vampire; his antecedent, from a short story by John Polidori published in 1819, was patently based on Polidori's friend, the infamous poet, Lord Byron. (In fact, the story was initially published as the work of Byron.) The "mad, bad and dangerous to know" Byron was the brooding, bad-boy prototype of all literary vampires (not to mention the prototype of most romantic heroes and rock stars), and the real-life exemplar of their troubling allure. When it comes to vampires, the sexy is baked in, and in recent decades, women writers and readers have explored that attraction to its limits. Stephenie Meyer did not invent this; her only innovation was to adapt for a YA audience a romance genre originally intended for adult women.

This is not to say, however, that the sexy vampire has not also run its course. They've become like the ubiquitous dukes in historical romance novels: always rich, always cruelly handsome, and always described, with a notable lack of enlightened reflection, as "predators" stalking their female prey. True, sexual fantasies are notoriously resistant to matters of conscience, but, ladies: Really? Isn't it time to at least start asking ourselves some tough questions about this particular penchant? Blindly fetishizing the most brutal and arbitrary manifestations of power and dominance is every bit as remedial as the boy fans' fixation on violence and gore, a taste abundantly catered to by "The Strain."

Like human elites, vampires are parasitical, dependent on us for their very sustenance, yet typically convinced that they are a master race and therefore entitled to treat us as the means to an end. But unlike human elites, who have no legitimate excuse for exploiting their fellows, vampires can't help it: They gotta eat. Exploitation is their nature. This keeps most vampire fiction from doing what, say, narratives like "The Hunger Games" attempt: challenging the social and economic inequality that intensifies around us every day. For over two centuries vampire stories have served as a fascinating pop-culture reflection on the glamour and terror of the world's users, but they've just about reached the end of their own usefulness in that respect. If they have anything new to tell us, they're certainly doing a great job of hiding it. It's time to let the undead rest in peace.