The Texas guv is earning raves for his attacks on Obama. Why does the press treat GOP campaign losers like winners? 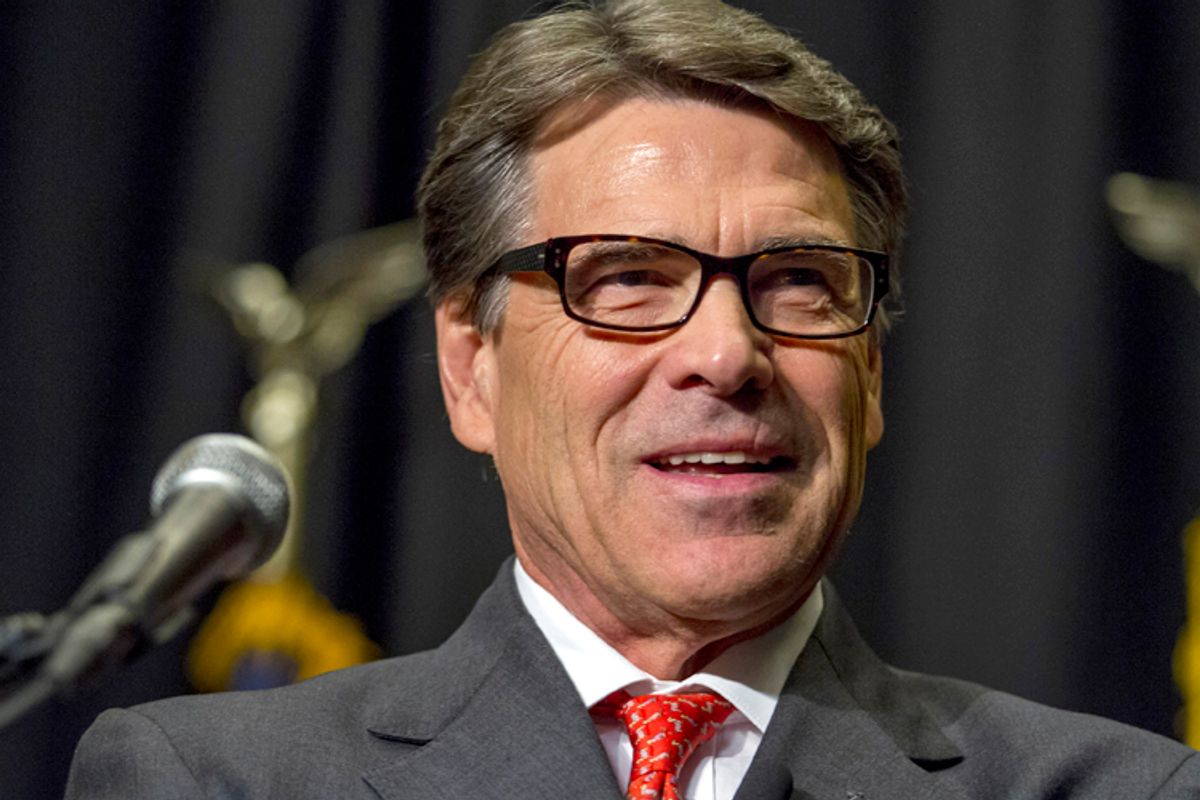 Thirty months after flaming out on the Republican primary campaign trail, Texas Gov. Rick Perry, whose aborted 2012 run logged a fifth-place finish in Iowa and a sixth-place showing in New Hampshire before being suspended, is suddenly enjoying a Beltway media resurgence. With the issue of America's border security and the influx of unaccompanied children generating headlines, Perry has been out front criticizing President Obama, and the governor's performance is earning raves.

"People love his ass" is what "one Republican operative close to Perry" told Buzzfeed (anonymously). On TheMcLaughlin Group this weekend, so many panelists sang Perry's praise ("shrewd," "winning," "absolutely terrific") that host John McLaughlin announced, "a star is born."

Time has been in full swoon mode lately, touting Perry as "swaggering," "handsome and folksy," and insisting he's "refreshed his message, retooled his workout routine and retrained his sights toward the national stage." Meanwhile CNN's Peter Hamby claimed Perry is "completely underrated" as a 2016 contender. Why? Because "other than Chris Christie, it's hard to think of another Republican candidate with the kind of charm and personal affability, and frankly just good political skills, that Rick Perry has."

Keep in mind, Perry recently compared gays to alcoholics (and then acknowledged he "stepped right in it"), and suggested that the Obama White House might somehow be "in on" the wave of immigrant refugees crossing the U.S. border. He also became something an punch line last week when this sourpuss photo of his meeting with Obama lit up Twitter: As for the issue of border security, Fox News' own Brit Hume noted on Sunday, Perry's demand that the National Guard be sent to patrol the border doesn't make much sense since, by law, Guardsmen aren't allowed to apprehend any of the refugee children coming into the country. (Children who are turning themselves over to Border Patrol agents.)

Apparently none of that matters when the press coalesces around a preferred narrative: Perry is hot and perfectly positioned for 2016. (He won the week!)

Perry's soft press shouldn't surprise close observers of the Beltway press corps. It's part of a larger media double standard where Republican campaign trail losers now routinely get treated like winners. (Think: John McCain, Sarah Palin, and Mitt Romney). The trend also extends to Republican policy failures, like thediscredited architects of the U.S.'s invasion of Iraq, who have been welcomed back onto the airwaves to pontificate about Iraq, despite the fact they got almost everything wrong about the invasion eleven years ago.

And no, the same courtesy is not extended to Democrats. John Kerry did not camp out on the Sunday talk shows after losing to President Bush in 2004 and become a sort of permanent, television White House critic, the way McCain did after getting trounced by Obama in 2008.

But wait, Hillary Clinton lost in 2008 and she's treated as a serious contender, so why shouldn't Perry be? First, Clinton collected nearly 2,000 primary delegates during her run, whereas Perry earned exactly zero. Second, Clinton enjoys an enormous lead in Democratic nomination polling if she chooses to run. Perry barely even registers among GOP voters.

Last month the Texas Republican Party held a straw vote and among possible 2016 hopefuls, the Texas governor finished a distant fourth, among Texas Republicans. Outside of Texas, his support remains even thinner. A recent WMUR Granite State poll from New Hampshire had Perry winning a barely-there two percent of Republican support for the 2016 GOP primary.

How bad of a candidate was Perry during the 2012 push? Really, really bad. Not only did he suffer a famous brain freeze when he couldn't remember which three government agencies he boldly promised to dismantle if he became president ("oops"), but he also called Social Security a "Ponzi scheme" and dined with birther Donald Trump.

Less than three years ago, Rick Perry showed himself to be an extraordinarily bad campaigner with a tin ear for retail politics. (i.e. An absent-minded quasi-birther.) Yet today, the same Rick Perry is touted by the Beltway press as a "handsome" and "underrated" campaigner who stands poised for greatness in the next presidential campaign.

Somewhere Al Gore must be shaking his head.

After he lost the 2000 election to a Supreme Court ruling, Gore was not treated to pleasing, Rick Perry-like press coverage. Rather than treating Gore as a "swaggering" star of American politics, the Beltway press basically told Gore to get lost. (The caustic coverage continued the endless media slights Gore had suffered during the campaign season.)

When the former vice president grew a beard, the catty D.C. press corps erupted in mockery:

Gore "look[s] more like an accountant on the lam from the IRS than a White House-compatible action figure" (Time); it's "scrawny and grey-patched" (the New York Post); it "might cover up some of the added chin heft" of his rumored post-election weight gain (the Boston Herald).

And when the former vice president stepped forward in 2002 to offer a prescient warning about against with in Iraq? On CNN's Reliable Sources, The New Republic's Michelle Cottle described her colleagues' reaction to Gore's speech: "[T]he vast majority of the staff believes this was the bitter rantings of a guy who is being politically motivated and disingenuous in his arguments."

Note that after losing an electoral landslide in 2008, Republican McCain was showered with the exact opposite type of coverage. As Media Matters noted five year ago, "[T]he media treated McCain as though his loss last November endowed him with even greater moral authority and quickly took up his crusade as their own."

In fact, despite a wildly unsuccessful presidential campaign and his lack of senior standing inside the U.S. Senate, McCain made at least fifteen Sunday talk show appearances in 2009. (By contrast, after he lost his White House run in 2004, Sen. John Kerry appeared on just three Sunday talk shows during the first eight months of President Bush's second term.) In 2013, the New York Times reported McCain had appeared on more than 60 Sunday talk shows in less than four years.

He wasn't the only candidate to have their reputation weirdly burnished by losing badly to Obama in 2008. Sarah Palin was catapulted into media superstardom after she helped lead the GOP to magnanimous defeat. In 2009, as she readied her book release, the obedient Beltway press treated her like a political "phenomena." ("It's as if she's like a senator or something," marveled NBC's David Gregory.) On the day her book arrived in stores, the Washington Post commemorated the event by publishing no less than four articles and two columns. That week, the paper also hosted nine online Palin-related Q&A sessions.

What did most of the awe-struck commentary often politely ignore at the time of the media's Palin "phenomena"? The fact that the vast majority of American voters were united in their conviction that Palin should not run for president. That included a majority of Republicans.

While Palin likely became the first losing vice presidential candidate exulted into D.C. media celebrity status, Republican Dick Cheney probably also made history by becoming not only the least-liked vice president in modern American history, but the first veep from an utterly failed administration to be treated by the press asa sage upon leaving office.

Cheney's media return in recent weeks, where he continually blames Obama for the troubles in Iraq that Cheney and President Bush first uncorked with their misguided war and faulty planning, was telegraphed five years ago when the D.C. press, just weeks after Cheney left office, hyped his anti-Obama utterances as news events. Keep in mind, at the time Cheney's approval stood at a not-to-be-believed 13 percent.

But for some reason, Republican losers get treated as winners by the press.