All the news unfit to print: How the media blew its Ukraine disaster coverage

Yet again, pundits and news organizations bungled their coverage of a developing tragedy 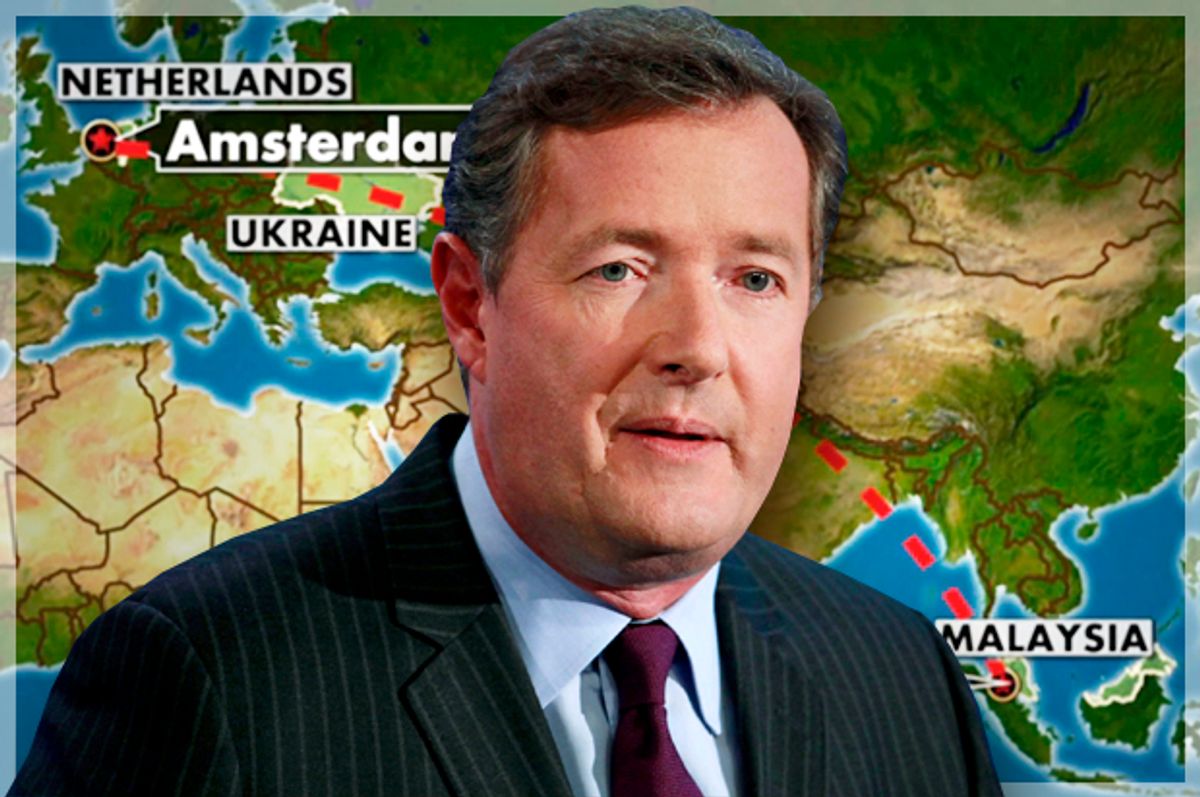 “Twitter is great for news, except when there’s actual news.”

So tweeted Neetzan Zimmerman, Whisper editor-in-chief and renowned social-media cognoscente, an hour or so after news first broke about Malaysian Airlines flight MH17 going missing over Ukrainian airspace on Thursday. As I write this, the story is still developing. An initial report by Interfax, a Russian non-governmental news agency, stated that “50 km away from Russian airspace, the plane began descending, then it was observed burning on the ground on Ukrainian territory.” There are, apparently, no survivors. A Ukrainian Interior Ministry advisor has said that the plane was shot down by rebels, a claim that was later backed by the U.S. government.

Zimmerman’s observation tapped into a largely resonant sentiment, but the scope of his critique is limited — his observation is also true for the entire digital news infrastructure that stands today. In the minutes immediately following my first touch on the news, it became increasingly apparent to me that digital news sites seemed almost functionally designed to obfuscate my ability to know, truly, the important things I wanted to know.

As a Malaysian, this was question number one: Is my family okay?

Followed by: What are the flight details? How have the relevant governments responded? Was this politically driven, and do I have to be worried about my passport? I mean, is everything -- will anything be -- alright?

Indeed, most of what I do know about MH17 came from Twitter and social media and various news websites across the Internet, but all the information came at the cost of time, tremendous anxiety, great amounts of frustration and traumatic uncertainty. It wasn’t just the pay-walls prohibiting me from getting basic key information, though that was certainly quite unnecessarily frustrating. (Thanks, Financial Times and NYT.) Rather, it was the escalating environment of speculation, provocation and informational insobriety among news publications through their online outlets. By noon, there was just too much crap to dig through in order to find actual, corroborated fact.

Tragedies like these are moments where the digital-news infrastructure proves its worth. This time round, there were two major problems, in particular.

The first is the strangely ubiquitous clumsiness around attempts to make some connection to the MH370 disappearance that happened earlier this year. Indeed, whenever the earlier plane is invoked, it is typically to contextualize the horrible year that Malaysian Airlines is currently experiencing. (And there actually is a perfectly fine way to do this, like this Businessweek article.) But there were also moments where journalists and pundits were subtly outsized in their implication of MH370 within the MH17 narrative. This implicating not only serves as a possible way to derail the real narrative involving Russian-Ukrainian politics, but also positions the specter of MH370 as an id-like presence compromising the gravity of this tragic situation. Almost 300 people lost their lives in a horrific manner, quite probably as a result of collateral damage in warfare, and what follows from this should include a serious review of civilian protection around the Russian-Ukrainian border area.

There were also times where a MH370-MH17 connection was meant as a joke — a terrible, terrible joke in horrendously poor taste — and that is simply unforgivable. Such media types should be challenged, shunned and ceremoniously ignored. It is incredibly unfortunate that on the greatly democratized world afforded by Twitter that these people be given, in some way, equal voice, but alas, this was in large part the whole point of information-based technological innovations like Twitter.

Just a sampling of the distastefulness:

(Biggs, on the other hand, decidedly did not apologize.)

The second difficulty encountered in finding solid, sober reporting today was of a more traditional nature: So many early reports were driven by the need to capitalize on the raw emotion of the disaster. Several news reports appeared to gravitate away from the actual act of presenting information and assessing the validity of that information in exchange for pushing forward cascading images of disaster. One example: Mic’s piece on the crash currently includes graphic embedded images from RT -- including one showing a visible mutilated body — as well as a play-by-ball transcription of audio culled from the Wire’s coverage of the crash, in which onlookers commented on the disaster before their eyes. Those elements served no real informational purpose, and seems only to exist for the benefit of gawking.

(The Wire's sister publication, The Atlantic, on the other hand, ran a great, and immediately relevant, piece earlier this afternoon on whether news sites should publish pictures of bodies. “There’s a fine line,” Megan Garber writes, “between journalism and sensationalism.”) Today's coverage illustrates two of the most problematic aspects of digital journalism as it exists today: One being a reduced presence of a deliberative and patient editor (the product, no doubt, of internal reorganization due to news companies being “disrupted”) and the other being a structural dependence on a be-there-first-and-fact-check-later business model. Those two elements seem to be the cornerstones of the digital news infrastructure that we have built, driven and sustained by technological innovation and venture capital, and it has served only to render the journalism industry as a whole much less trustworthy and more inclined towards pugnacity.

As I mentioned before, tragedies like these are moments of reckoning for digital news. The fact that I — and many, many others, I reckon — was flooded with information (true and otherwise) moments after first hearing the news is a testament to the fact that we’ve figured out how to build a loud, powerful system. Now we need to figure out how to make it learn propriety, humility and purpose.